The Price of the Haircut: Stories

This offbeat collection about endangered marriages is sure to please. 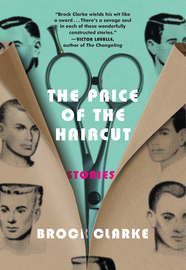 There aren’t enough superlatives to praise Brock Clarke’s extraordinary new collection, The Price of the Haircut. In fact, it’s hard to find fault or serious flaws with any of the 11 stories.

Clarke is outrageously inventive. He has a masterful command of voice, style, and character, and an off-key humor which is often mind-boggling. His narrative strengths and exceptional control of the short-story form resemble the robustness of Jhumpa Lahiri’s Interpreter of Maladies and Denis Johnson’s The Largesse of the Sea Maiden. They also call to mind the postmodern shenanigans of John Barth, Donald Barthelme, and Robert Coover.

The opening story, “The Price of the Haircut,” demonstrates Clarke’s idiosyncratic imagination. One week after an “unarmed black teenage boy” is “shot in the back and killed by a white city policeman” in a “good-sized city,” the mayor declares that the ensuing riot was actually caused by $8 haircuts.

Four white “right-minded, left-leaning, forward-thinking men of the world” face a moral dilemma. Should they patronize the barbershop that allegedly incited the riot? After all, each blames the end of his own marriage on the exorbitant cost (from $15-$25) of bad haircuts. Against what they are doing even as they do it, the men justify waiting in line at the racist barber’s, discovering a social imperative through Clarke’s searing satire.

In “What Is the Cure for Meanness?” a 16-year-old narrator contemplates whether he is going to be like his “bullying son of a bitch” father or the “selfless and good” mother whom his father has left. He thinks if he inundates his mother with gifts, it will assuage her pain. What he discovers is that he knows little of what actually triggered his father’s leaving.

The estranged husband in “Concerning Lizzie Borden, Her Axe, My Wife” is perplexed by his wife’s insistence on visiting the Lizzie Borden Bed and Breakfast in Fall River, Massachusetts, less than a week after she “kicked [him] out of the house.” In a series of flashbacks, the husband wonders how he, a Kodak researcher, and his wife, a teacher of ninth- and tenth-grade girls, got to where they are.

In “Our Pointy Boots,” a group of 14 soldiers on Christmas leave from duty in Iraq harbor a mortifying secret. When they return home to bewildered spouses trying to cope with the soldiers’ unfamiliar behavior, the story of their time in combat unfolds. A series of graphic details of a brutal assault on an Iraqi family reveals a shocking disclosure which illuminates their current post-traumatic condition.

Misperceptions of another sort are on display in “The Misunderstanding.” When a family of four dines out and begins to squabble, they are identified as “prankish guerrilla theater.” By the end of the story, the parents wonder if they would repeat their marriage vows.

Another shaky marriage is exposed in “That Which We Will Not Give.” The Murrays of Cincinnati each provide a different perspective concerning a key event in their lives — the Thanksgiving when Mrs. Murray asked Mr. Murray for a divorce, and he refused. She continues to ask year after year, and he refuses year after year. Their children grow up, leave home, marry, return, and endure their parents’ feuding until one eventful Thanksgiving when their mother makes a significant decision.

The final two stories, “Children Who Divorce” and “The Pity Palace,” are exemplum of Clarke’s facile handling of unique concepts. The first offers a mystery plot surrounding a troupe of actors on a steam-powered paddleboat, the Ohio River Lady Queen. What makes the theater company unusual is that they are all “divorced grown up child actors” trying to relive their glory days. In this case, the cast of “Willy Wonka & the Chocolate Factory” is performing “Trouble at the Chocolate Factory: Strike!” Love, longing, and loss lead to the death of one of the group.

The preponderance of damaged unions continues in the absurdist comedy of “The Pity Palace.” The surreal humor begins with the Pirandello-like pun in the title. Antonio Vieri lives in Florence, Italy, the site of the Pitti Palace. There, he is obsessed with the idea that his wife has left him for the “famous American author who wrote those best-selling novels about Italian gangsters in New York.”

The problem is that Antonio may be delusional. It’s not clear whether or not he even has a wife. What is clear is that his residence, the pity palace of the title, becomes a tourist destination.

Without reservation, the stories in The Price of the Haircut are a series of unexpected, rewarding pleasures. They are the finest products of an accomplished writer with a unique mind.

Robert Allen Papinchak, a former university English professor, has reviewed fiction in a range of publications, including the New York Times Book Review, the Washington Post, the Chicago Tribune, USA Today, People, the New York Journal of Books, the Los Angeles Review of Books, and many others. He has been a judge for Publishers Weekly’s BookLife Creative Writing Contest and the Nelson Algren Literary Prize for the Short Story. His own fiction has been nominated for the Pushcart Prize. He is the author of Sherwood Anderson: A Study of the Short Fiction.