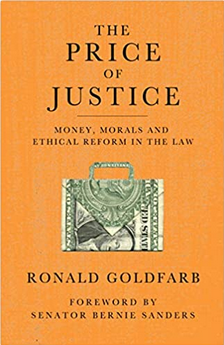 Author and longtime legal reformer Ronald Goldfarb uses The Price of Justice, the most recent of his 12 books, to explode two of the myths that allow well-paid lawyers to sleep peacefully at night despite the depredations of their corporate clients.

In the first of these myths, lawyers like to say that they cannot be held responsible for the actions of their clients because, after all, everyone — even corporate polluters — is entitled to legal representation in our system of so-called justice. Yet, as Goldfarb notes, most lawyers “make personal choices” about which clients and causes to represent. For that reason, he says, “it is not inappropriate to characterize us by what we do.”

The second of the myths reassures practicing lawyers that their roles in the adversarial system ultimately serve not only their own professional and financial interests but the broader public interest as well. An adversarial justice system works, just like Adam Smith’s invisible hand, to channel the search for truth and justice in the fairest and most efficient manner.

Both of these claims are flawed, Goldfarb explains. “I do not believe,” he writes in his opening chapter, “lawyers can justify all of their professional behavior by invoking professional guidelines or the adversary system as self-legitimizing mechanisms that supposedly bend toward justice.”

Far from it, as Goldfarb details in subsequent chapters on the criminal system and the civil system. The public defenders who represent indigent defendants in criminal cases are overworked and under-resourced. Nearly three out of four public-defender offices nationwide have what are deemed to be excessive caseloads that mock the supposed constitutional right to counsel, according to a study by the American Bar Association. Many of the offices also have no professional investigators to help the overworked attorneys prepare an effective defense.

In civil cases, the indigent have no constitutional right to court-appointed counsel. Legal-aid societies, underfunded and understaffed, fill only part of the gap. Goldfarb quotes the respected Stanford law professor Deborah Rhode as reporting that over four-fifths of the legal needs of the poor are unmet and half the legal needs of people of modest means are likewise unmet.

The equal-justice glass, then, is mostly empty, not even close to half full. In truth, he writes, “the scales of justices are increasingly tilted in favor of the rich with serious consequences to us all, lawyers and clients alike.” In fact, inequality is built into the legal system and is not merely a bug that emerges in the courtroom.

Goldfarb claims no expertise in economic theory for himself, but he cites two economists for the broad point that legal doctrines enable the free market to subordinate democracy by concentrating economic and political power in dominant groups. The economist Katharina Pistor explains in her book The Code of Capital: How the Law Creates Wealth and Inequality that just as lawyers protected the property rights of wealthy landowners in feudal times, lawyers today protect the power of the wealthy and corporations in what she calls an “empire of law.”

The rising costs of legal education force many newly admitted lawyers into this “empire of law,” as Goldfarb explains. Most law school graduates enter the legal market with substantial student debt and naturally seek jobs that pay more money than government service or public-interest law. Or, as Justice Oliver Wendell Holmes Jr. put it in a barbed comment on the profession: “We’re in the law business, not the justice business.”

Goldfarb’s account is more descriptive than prescriptive. He looks favorably on the cost-saving suggestion to cut law school from three years to two. In criminal justice, he applauds the 60 district attorneys’ offices that have established conviction-integrity units to identify wrongful convictions and move for exonerations when warranted. In civil justice, he calls for law firms to expand their pro bono work.

Goldfarb has paid his dues in that regard after post-law-school stints with the Justice Department and Congress. As a lawyer, he recalls his role in a precedent-setting case in the 1970s that found conditions for jailed defendants awaiting trial in the District of Columbia amounted to cruel and unusual punishment in violation of the Eighth Amendment. Later, he led efforts to implement a court ruling to require the U.S. Department of Labor to increase enforcement of federal labor laws on behalf of migrant farm workers.

Goldfarb pleads in his final pages for the legal profession — law schools, the bar, and professional organizations — to raise the status of public-interest law and to encourage lawyers to re-examine their roles in the search for justice. The change he hopes for will be, he acknowledges, “a long but necessary turn of events, but a necessary one to begin.”

Meet Me in Venice: A Chinese Immigrant’s Journey from the Far East to the Faraway West

Through the story of one Chinese immigrant, this case study is a revealing and eye-opening account of modern immigration and the true human cost of what we wear and eat.