That’s What She Said: What Men Need to Know (and Women Need to Tell Them) about Working Together 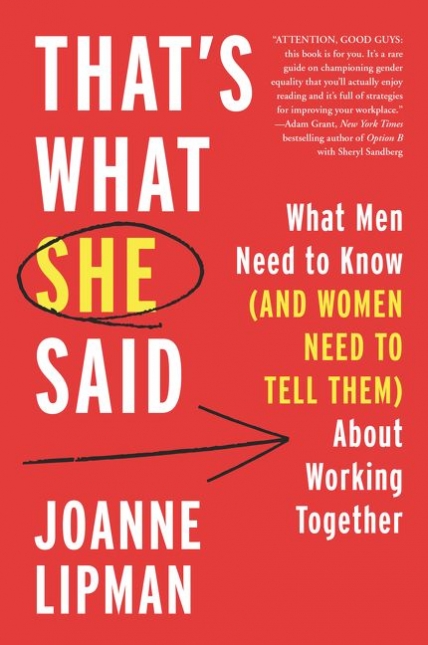 Men of goodwill, you can stop quivering despite all the #MeToo in the air. Your guidebook is at hand. Joanne Lipman, until recently chief content officer of Gannett and editor-in-chief of USA Today, has written a book charting day-to-day things everyone can do, starting right now, to put women on a path toward true workplace equality. It’s superbly researched and impeccably reasoned.

And it should come with a neon sticker on the front saying: “Gender-cruelty free! No balls nailed to the wall.”

Lipman makes a diatribe-free, convincing case that both men and women are routinely biased against working women, often in ways we don’t discern until they are pointed out. She presents no moral imperative for change. Instead, she uses research and real-life examples to persuade us that fighting gender bias is good for business.

In every sphere, companies with women well-represented on their boards, and in significant senior management positions, tend to be more profitable.

While half of all men and almost all women say they aren’t biased against women in a work setting, it isn’t true. Everyone is. Lipman confesses that while researching the book, she even found the trait in herself. One day, she realized she’d gotten in line for a male hotel clerk on the automatic assumption that he would be faster than the women on either side.

Another example: It’s considered commendable for a man to structure his time so he can show up for kids’ activities. For a woman, it’s a weakness — a sign she isn’t serious, her head isn’t in her work.

Now that you’re aware of that thought-trap, you’re more likely to notice and self-correct if you fall into it. That’s the point.

All women get talked over and interrupted in meetings. It happens so routinely that both genders are unlikely to notice. A woman who experiences this may try to get in the game a second time. Or not.

Mostly, women shrug inwardly and say nothing. Even female Supreme Court justices get interrupted by their male colleagues three times as often.

It might be routine, but it merits changing — and we’re not talking morals or manners. Shutting women out wastes creativity, training, experience, ability.

How to correct it? Notice interruptions. Both genders can speak up for colleagues. Signal “stop” with a hand and say, “Hold that thought, Jason. I’d like to hear the rest of what Laura was saying.”

Since men are rewarded for “assertiveness,” while women are punished for being “pushy” (and that is so deeply ingrained it’s not going to change next Thursday), “Laura” should ask male colleagues to partner with her in being heard.

Readers of the female persuasion will find it helpful to take regular Aretha breaks while marching through That’s What She Said. (All together now: “R-E-S-P-E-C-T! Find out what it means to me!”)

The weight of Lipman’s exacting research, study after study noting the myriad ways working women are discounted, is depressing. Especially so in the early chapters, before she gets more into “what to do about it” mode.

Should you ever need a compendium of research on gender bias, look no further. Lipman offers 50 pages of endnotes in six-point type — a fifth of the book.

Overall, this is a hopeful, helpful read. It would make for a lively book-club discussion. And if your company keeps a list of sound business books for consideration? That’s What She Said is an excellent addition.

Salley Shannon is president of the Independent.