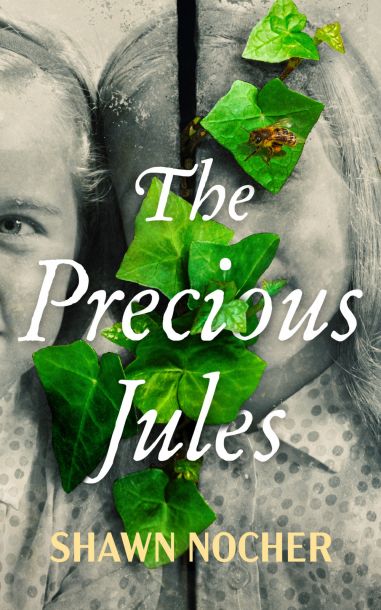 One weekend in April 2009, Stone and Hillary Jules gather their adult children at their stately Baltimore home to make an announcement. They’ve just filed an appeal to bring their developmentally challenged daughter, Ella, back from Beechwood, the Maryland facility where she’s resided since 1977. The Precious Jules, Shawn Nocher’s second novel, offers a nuanced, emotionally wise portrayal of this decision, the fallout from it, and how it reverberates through the family and with Ella’s devoted longtime caregiver, Lynetta.

With Ella stowed at Beechwood all these years, the Jules have fit right in with the other moneyed bluebloods of Roland Park, a Norman Rockwell-like neighborhood filled with turn-of-the-century homes “bumpered by old-growth hydrangeas” and “second-story exterior doors that walk out to tiny fairy tale balconies.”

The siblings are as blond and blue-eyed as their parents. The eldest, Jax, an English teacher in California, wants to protect everyone but can’t forgive his mother. Second-born George, a Philadelphia banker, is physically scarred from an early childhood attack by Ella. He suffered emotional fallout, too, and “does not understand love but knows it when he sees it.”

Third and fourth in line, Belle and Ella, are twins, except that “where Belle is long and lithe, Ella resembles a plump, milk-drunk puppy.” Now a writer, Belle is haunted by having escaped the “tragically inconsequential coin toss” that damaged her sister instead of her at birth. Fifth-born Finney is a physician in Key West whose homosexuality disturbs his conservative parents. And youngest child Tess, about to leave a failed marriage, has never even met Ella yet wonders why she was so abruptly banished.

The one thing the siblings share but leave unspoken? Guilt over the suspicion that Ella’s exile was somehow their fault. But the photogenic Jules family hides plenty of other dark secrets.

The novel’s first chapter — in which a very pregnant Hillary briefly leaves 4-year-old Ella alone with her siblings, and a physical attack ensues — quickly dispels the “fairytale family” notion and launches the story. From there, the narrative spins back and forth in time from the pivotal weekend in 2009 to 1974, illuminates the family dynamics just before and just after Ella leaves, and offers insights into the parents’ decision to finally bring her home.

The point-of-view alternates throughout, allowing for an intimate glimpse into the minds of the entire Jules family, Lynetta, and even neighbor Clarissa, Jax’s former classmate who “loves Jax the way two children with a secret that could crack the sky wide open love each other.”

Two questions keep readers turning the pages: Why was Ella sent away in the first place, and why does her mother want so badly to bring her home after three decades? Answers do come, but so do twists and turns that threaten everything the Jules family holds dear.

Surprisingly, it’s Ella herself who shines most, both in the generosity of her affection and the honesty of her difficulties with the simplest tasks. Often in “sweatpants that gather at her ankles over Velcro-fastened shoes,” she clips pictures of cats from magazines, has to be reminded to flush the toilet, and then has to be told to stop flushing it. Yet she performs her chores as best she can and not once doubts her worth. “You welcome,” she says to her mother and Lynetta at one point, “you both very welcome.”

The beautifully written The Precious Jules forces readers to consider the burden of secrets, the consequences of actions, and the line between what one person wants but another truly needs. Author Nocher seems to suggest that that line may be too fine to discern, but we shouldn’t stop trying. And maybe all of us should strive to be kind not just to others but to ourselves amid lives that — in the throes of being lived — never get less complicated.

With a B.A. from Colgate University, an M.A. from Georgetown University, both in Russian area studies, and a UCLA certificate in fiction writing, Anne Eliot Feldman has worked at the Library of Congress and in the defense industry. She’s completing her own debut novel about the heart-stopping fragility of cacao beans and true love.