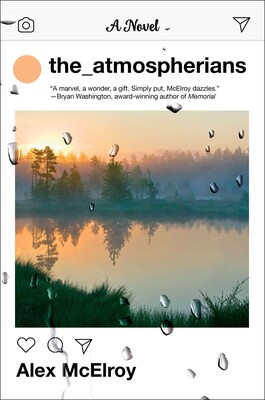 Twenty-nine-year-old health and wellness influencer Sasha Marcus has a problem. Her most tenacious online troll has twisted her rebuttal to his latest crude comment into an invitation to kill himself — and actually does so, live, online. In an instant, Sasha goes from guru to pariah, bombarded by posts accusing her of murder and holed up in her apartment with dwindling savings and angry men protesting outside IRL.

To the rescue comes her childhood friend Dyson, offering her an out: an invitation to join him on 15 acres of farmland he inherited in southern New Jersey to help launch the Atmosphere, a transformational new program — which Dyson himself calls a cult — that promises to rehabilitate toxic men:

“The Atmosphere began with a simple observation: men are behaving badly. For thousands of years, men placed themselves at the center of society. Their chase for power, attention, and wealth resulted in massive global disasters…What was needed was a community where men could challenge themselves to step out of the spotlight and into the background — to provide the ‘atmosphere,’ like extras in a movie.”

Of course, this rescue winds up leading Sasha into even more precarious territory, as co-leader of an isolated, volatile, and fairly twisted cult. Disorganized and impulsive, Dyson is ill-equipped to run any kind of program. He’s promised comprehensive counseling and job training, with experience in neither, leaving Sasha scrambling to provide some kind of order for the 12 men he’s arranged to house, feed, clothe, and detoxify.

The jerry-rigged program begins with running laps, eating bran flakes, and listening to Dyson and Sasha read snippets of vocational information from the For Dummies series of books. Soon enough, however, the duo’s on-the-fly solutions to each new problem devolve into increasingly disturbing rituals, such as a food-poisoning incident morphing into ritualized purging therapy.

With each misstep, the reader cringes, expecting everything to blow up in Dyson’s and Sasha’s faces. But author Alex McElroy continually finds ways to surprise us, throwing one curveball after another to keep the enclave teetering along its precarious path.

The world of the novel resembles ours, but with a twist: man hordes, a phenomenon in which unrelated groups of men randomly flock together as though temporarily possessed and engage in inexplicable group activities. Sometimes they’re helpful, mowing lawns or rescuing kittens from trees; other times, they gather for violence, throwing bricks through windows or kicking a dog to death.

And, each time, the men disperse afterward with only a vague — or no — recollection of what they’ve done. There’s no way to predict when a man horde will form, and no way to predict which way it’s going to go when it coalesces. The thinness of the veil between bizarre fiction and current reality gives one pause.

The novel is briskly paced and structured in short chapters that either move the plot forward, build suspense, or provide needed context. McElroy renders characters and scenes in brilliant flashes of memorable images:

“He was bulbous and gruff, with eyebrows as thick as pelts and a metal bar through his septum.”

“Yellow-crisp grass widened out to a crown of pine trees. Their tips knifed into a stony sky.”

“Dyson’s body sliced through the center of the pond like a scalpel splitting a stomach.”

Images such as these are doing double-duty, giving us vivid mental pictures that also speak to the peril and anxiety surrounding Sasha with allusions to electric shock and piercing metal objects. This is not to say that the novel is grim — it’s delightfully witty satire. McElroy pokes fun at various segments of our media-saturated culture. Sasha’s initial job is at Gravee, an “elite midwestern fusion restaurant” in Manhattan serving “elegant revisions of cheese curds and funnel cakes.”

She considers this her side gig to her online health and wellness venture, Abandon, where she makes money by telling people not to buy things: “I taught refusal, relaxation, and patience: there was power in doing nothing; nothing required discipline, clarity, love.” There’s also a podcaster named Sylence, whose episodes consist of 60 minutes of silence with breaks for sponsor segments:

“And on rare occasions, it was rumored, Sy could be heard breathing into the mic. His most committed listeners argued for the authenticity of these moments with the enthusiastic paranoia of alien abductees. Syphers, they called themselves.”

Reading The Atmospherians was like eating one dark chocolate, sea salt truffle after another until, oops, I’d eaten the whole box. “Sea salt truffle” may sound weirdly specific, but I assure you, the humor here is delicious, and Sasha is salty. She’s prickly, a woman who by no means goes out of her way to be kind. But she’s also complex, protective of her fragile friend Dyson, and prone to bouts of empathy for the Atmospherians, men who are at once acolytes and threats.

I often get annoyed with protagonists who make as many self-destructive decisions as Sasha does, but her recklessness is different, fueled by a compelling amalgam of guilt and contrariness. She, like the whole novel, plunges forward with so much gusto, I couldn’t look away.

Tara Campbell is a writer, teacher, Kimbilio Fellow, and fiction editor at Barrelhouse. She received her MFA from American University in 2019. Previous and upcoming publication credits include SmokeLong Quarterly, Masters Review, Wigleaf, Jellyfish Review, Booth, and CRAFT Literary. She's the author of a novel, TreeVolution, and two collections, Circe's Bicycle and Midnight at the Organporium. Her newest book, Political AF: A Rage Collection, was released by Unlikely Books in August.