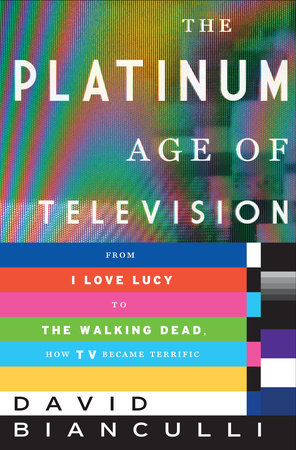 In 2004, I was running on the National Mall toward the Lincoln Memorial, proudly proclaiming to my friends that I liked TV. Loved TV. It seemed an extraordinary thing to admit. Wasn’t television a mindless exercise in low culture? Nope. TV was extraordinary. Something to be anticipated, discussed, and analyzed in the greatest detail.

“Lost” was a show that revolutionized the way I watched television. Suddenly, I was reading about the show, discussing it with friends, and making it “appointment TV.” For critic and author David Bianculli, that drug was “The Sopranos”: The quality of filmmaking, the caliber of acting, and the flexible production schedule changed television as we know it.

In his fourth book, Bianculli considers today to be the “Platinum Age of Television.” Playing off the gold-record statistics studios use to indicate sales, he claims the “quality and quantity of today’s TV offerings make the modern era worthy of that title.”

He debates that its possible debut came as early as 1970, with “The Mary Tyler Moore Show” on CBS, or 1981, when “Hill Street Blues” changed the look and content of a weekly series. Even as late as 1999, when “The West Wing” and “The Sopranos” went on the air. Ultimately, he settles on these last two shows, particularly “The Sopranos,” as ushering in the magical era.

To support his point, Bianculli goes through the various genres of television and then talks with key players in chapter-long interviews, asking about early influences and later artistic ambitions and decisions.

The subject matter is light and enjoyable. Most interviewees watched TV long before they made shows themselves, and it’s interesting to see how their favorites line up with mine.

One of the more profound chapters focuses on Louis C.K. Although he is currently enjoying great success, he climbed up the comedy and sitcom ladder and had many failures, often preceded by strongly worded commentary by critics like Bianculli.

C.K. calls Bianculli out, and they have an honest talk. C.K. says that he needed two seasons of “Lucky Louie” to get the show to its correct audience, but the show was panned so strongly its first year, there was no second. C.K. wrote an email rebuttal to Bianculli during “Lucky Louie’s” first season but didn’t send it, acknowledging that TV was changing and the expectations were higher.

One of Bianculli’s most compelling analyses centers on why things changed for the medium. Why did television get so much better when “The Sopranos” hit the air? The show broke the rules — suddenly the bad guys were the stars, ushering in an age of antiheros. Bianculli talks about the episode where mob boss Tony is doing a college tour with daughter Meadow and finds time to kill a snitch he runs into while on the trip. HBO executives worried the murder would push fans away. They were wrong.

“The Sopranos” also had discretion on episode count. If the director thought he needed 12 to finish a season, that was fine. In Bianculli’s analysis, this created room for more inspired directing, loosening the rote framework of contract-driven requirements.

Another fun element of the book is the focus on series finales. Even if you haven’t seen all the shows profiled, reading about the scrutiny various endings received is entertaining. “The Sopranos” annoyed people when it didn’t end, but simply stopped. “St. Elsewhere” revolutionized TV with its snow-globe mystery conclusion.

Bianculli ends his book with a quote from Matt Groening, creator of “The Simpsons”: “What a great time to be writing about television. It’s absolutely an amazing time in TV, and I never would have predicted that TV would get this good.”

It’s also not a bad time to be watching (and reviewing) a book about television.

JR Scrafford is an avid reader who also manages to find time to watch television.

A detailed if not altogether necessary new history.