Compassionate realism illuminates this account of a working-class seaside town in England. 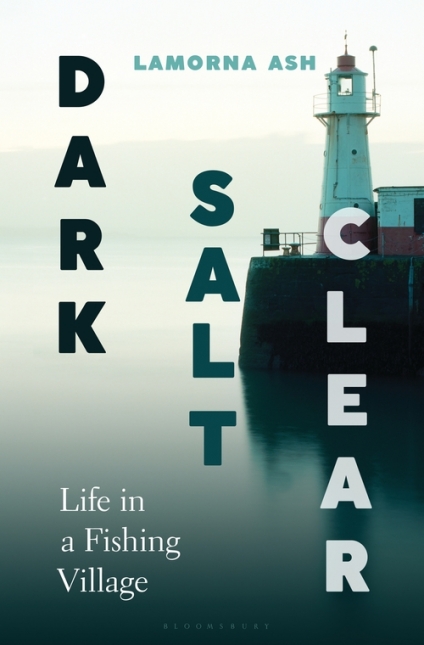 “Stop trying to romanticize us, all right,” a fisherman named Big John tells author Lamorna Ash one night over pints. Yet the trouble with writing about fabled places like Cornwall, England, and professions like commercial fishing is that they must be unraveled from the tangle of fantasies imposed on them.

To portray Cornwall with any nuance, writers face the challenge of getting their audience to be brave enough to look past the vacation homes and picturesque beaches and think beyond TV shows like “Doc Martin” and “Poldark.” They must speak above the din of crashing waves and beyond the craggy sea cliffs that brand themselves on a newcomer's brain.

This same Hollywood veneer applies to the fishermen themselves, too. For those who’ve never set foot on a boat, all we know of life at sea comes from “Deadliest Catch,” reports from the World Wildlife Fund about overfishing, and the occasional novel.

However, Ash's debut work of nonfiction, Dark, Salt, Clear: Life in a Fishing Village, takes on the monumental task of pulling back the myth and exposing reality. Along the way, she uncovers a people on the precipice of a changing world and a place that is as beautiful as it is dangerous.

Ash's mother's family came from Cornwall — the author is named for a cove there — yet she herself is a Londoner. In her early 20s, she moves to Newlyn, a tiny fishing village of around 4,000 people, to try to make her way onto a trawler and then write about the experience.

She eventually finds herself variously working on the rolling deck of the Filadelfia, searching for birds with an ornithologist, and drinking in the town's pubs alongside villagers. As Ash establishes herself in Newlyn, she begins to form an impression of the place and its people that is at once gritty, lyrical, and complex.

Fishing, she discovers, is no longer the steady career it once was. As she writes about gutting fish and watching TV with the crew at night, she sprinkles in bits of reporting on how the number of fish has plummeted, as has the price people will pay for them. Those who remain in the trade do so for a variety of reasons. One is that commercial fishing is among the few stable jobs in a region of the U.K. significantly poorer than the rest of the country. Another is that it’s often the only work the men know. Some are called to the sea and find pleasure in its rough beauty.

While Ash feels a deep connection with the men who spend their days at sea, she doesn’t shy away from the complicated truth of their lives. Despite improved technology, injuries and deaths are still more common in commercial fishing than in many other blue-collar professions. The scars from these incidents — and the toll taken on fishermen’s and their families’ mental health — reveal themselves in the village.

Ash interviews many of the men about their personal relationships. She speaks to sons who go to sea after their fathers drown; men whose children cry and hide behind their mothers at the sight of them because it’s been so long since they’ve seen each other; and wives who try to balance the come-and-go rhythm of a spouse lost to the waves for weeks at a time.

Right before Ash arrived in Newlyn, a young man took his life, and his story pops in and out of the narrative like a ghost at night. Cornwall has an incredibly high suicide rate, leaving many of Ash's friends back in London astonished that so many could kill themselves in such a pretty region. The author, though, doesn’t shy away from showing us that lovely places and despair are not mutually exclusive.

Alcohol also plays a significant role in both the book and the lives of the fishermen. "You were too pissed to remember," one tells Ash as he repeats a previously shared detail to her. While she writes with a precision beyond her years, this was one area where the author could have used a bit more self-reflection.

Still, she acknowledges the village's relationship with alcohol. Addiction is common, and many fishermen call heading out to fish "Sea-tox" because of ships' strict no-drinking policies. The pubs are also the central place to socialize and build community in Newlyn, just as in many working-class towns in the world. I couldn’t help but wonder if Ash would’ve had such intimate access to the villagers if she didn’t drink.

Dark, Salt, Clear is above all a meditation on place, class, and generational identity. Although there are benefits to the cosmopolitan world of urban millennials and Gen Z, a placeless void plagues many of us. Lamorna Ash grapples with this self-understanding through her discussions with Newlyn residents young and old and her research into the village’s deceased. A sense of fierce belonging seems to exude from them all like fog from the sea. It’s a feeling that calls to the author, as well.