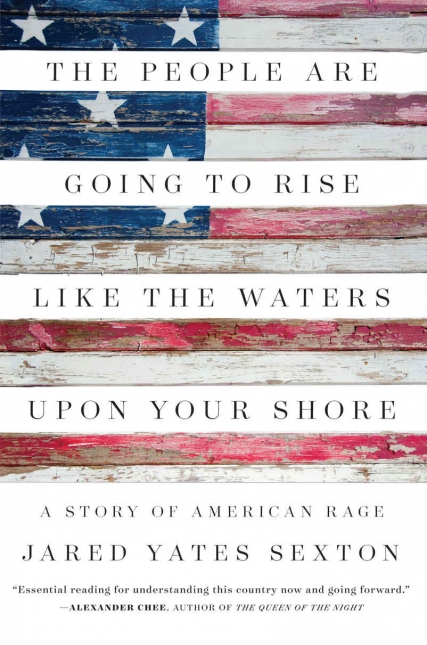 “Too soon! Too soon!” the inner self cries when considering whether to read Jared Yates Sexton’s accurate, and therefore heart-rending, account of the 2016 presidential election. The wounds are yet fresh. It’s not history, it’s our dire present.

But perhaps you’re ready for a wise and energetic narrative of how the United States was Putinized. Perhaps you’d be willing to consider resistance if you heard a compelling witness. If you think that knowledge of the truth is more useful than memories of pain, then The People Are Going to Rise is for you.

Sexton took it upon himself — and these days that means regularly receiving death threats — to examine the Trump campaign closely and to criticize it frequently. It took somebody unique to get inside Trump rallies and not be attacked or beaten. Fortunately for Sexton, he was born white and grew up in Indiana among some strongly conservative people. He looked the part.

Whiteness got him in, and so he was able to observe, in some ways like at a Klan rally, hate-filled events that left him “sick in the stomach.” After he tweeted about the “General awfulness” of a Greensboro-rally parking lot, he became a social-media star and published stories in the New Republic and the New York Times. When his Twitter followers went from 1,400 to “tens of thousands…the death threats began.”

But he survived the campaign and has put together a book offering an unsentimental, reasoned assessment of the irrational destruction to the institutions of America wrought by Donald Trump and his angry followers. Of course, as Sexton begins his journey, Trump is just one of many Republican candidates, and a bumbling incompetent blowhard at that.

Measuring the lot of them, Sexton reminds us of why Rush Limbaugh rose to prominence and why Fox News was begun. In 1987, the FCC “discontinued their enforcement of the Fairness Doctrine,” which meant that equal air-time was no longer necessary when a public network made a political statement or shared an opinion. “But now thirty years later, we see a dire political landscape that has been polarized by unregulated partisan media.”

Sexton says, when he steamrolled Fox and refused to bow to them after his poor behavior with Megyn Kelly, Trump became “the arbiter of who could be trusted and who was fair. Never had a Republican candidate called into question Fox’s legitimacy.”

Trump made Fox into another untrustworthy media source. That was how far right Fox and Rush had pushed their followers over the years. Trump was “the first person to take the conservative media’s portrayal of the threat at face value, the first to react in the way a frightened American public had been trained to expect.” And so he was more like Steve Bannon than Roger Ailes.

Concurrently, Sexton examines the anger and battles of the Democrats’ nomination process, with Hillary Clinton and Bernie Sanders repelling farther apart each step of the way, until the moment it seemed as if unity would reign, at the Democratic convention.

But then Wikileaks dumped the DNC emails (most assuredly procured from Russian sources), and the issues of Clinton’s email server were blown into false equivalence with Trump’s incompetence and Russian-loving ways. And many who supported Bernie could never vote for Hillary.

Sexton finds no solace at the Green Party convention, which is presented as a comic interlude. The painful irony was that this group was “so far left they’d actually more or less retreated from society at large and resided in a world where patting yourself on the back in the voting booth was more important than what actually happened in the country.”

Still, the Trump phenomenon dominates this book. The fascination comes, in part, because this story of one who is so undeserving of so much must end in tragedy. Trump was “a pure unadulterated reaction to what a slice of the American public wanted…[He] wasn’t the cause, he was the disease personified.”

After another rally, Sexton says, “The men and women around me were burning with a rage and ready to fight, to destroy, to dismember — if only Trump gave them permission.” This leads him to worry if “this thing, this vile wretched thing, might somehow get worse.” At yet another rally, Sexton writes of a threat, “Somebody near me, in the middle of the program, told me, ‘You don’t look right.’”

All the lowlights are highlighted: Trump threatening to throw Hillary Clinton in jail; the “grab ‘em by the pussy” affair; and all of the trash he dragged into the campaign. But, Sexton says, “Trump’s masterstroke…was setting his sights on the media early in the race” so he could be “the sole keeper of the truth.” And this twisting of narratives “neutralized the press.”

If you didn’t want to believe the media, you could believe Donald Trump.

A liar lying about what is true and about who is speaking the truth: Sexton calls it what it is: cognitive dissonance — always Trump’s great weapon, because, as a practiced conman, he is immune to it. But the rest of us are eviscerated by it. Sexton suggests that this will be what draws the battle lines most clearly between two camps: those who can abide Trump’s cognitive dissonance versus those who can’t.

Just before the election plays out, Sexton decries the Clinton campaign’s strategy of lumping Trump in with the “deplorables.” Working-class people are not so squeamish about boorish language and behavior. Trump, relative to Clinton, “positioned himself as the voice of the common man [even though] he was lying and…his supporters knew as much.”

We know how the election turned out, and now we’ve been living in Trumplandia for eight months. Sexton observes, “The schizophrenia that’d characterized the Trump campaign had evolved into everyday existence in America.”

You may not be looking for a reminder of these days, but if you’re unwilling to keep your head in the sand, Sexton’s book will help you see and understand them better.