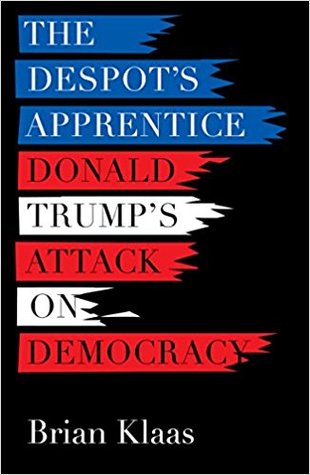 Nearly one year into Donald Trump's presidency, political scientist Brian Klaas has written a damning indictment of Trump's attack on democracy — softened, however, by the encouraging conclusion that our democracy is “not yet at the tipping point” toward authoritarianism.

Klaas, an American expert on comparative politics now at the London School of Economics, provides a point-by-point bill of authoritarian practices that Trump, the “despot's apprentice” of the book's title, is mimicking or embracing.

Consider, for example, the powerful role that the late Uzbeki dictator Islam Karimov gave to his eldest daughter, Gulnara, to try to soften his image as he established “a terrifying autocracy” in the former Soviet republic in Central Asia. The Ivy League-educated Gulnara promoted a variety of worthwhile causes, but also became “fabulously rich” by selling her influence with her father and eventually building a successful business in fashion and jewelry.

“Despots run their countries like a family business,” Klaas writes in a chapter entitled “Take Your Kids to Work Day.” He notes from other authoritarian countries a second parallel to the Trump White House: military leaders forced to maneuver around family members to gain the leader's attention.

Klaas sees a more ominous parallel between Trump's rise to power and the notorious Ugandan dictator Idi Amin. After gaining power in a military coup in 1971, Amin strengthened his political standing by expelling all Asians from the East African nation, exploiting native Ugandans' resentment of Asians' relative economic success.

In a like vein, Klaas describes Trump as “systematically stoking religious and racial divides in the United States as he demonizes minority groups in the eyes of an intolerant segment of the white population.”

Trump is also following the tyrant's playbook by politicizing democratic institutions in order to reinforce his appeal to his political base. “All despots try to politicize institutions,” Klaas writes.

He recalls Trump's racist attack during the 2016 campaign on the Mexican-American judge overseeing the civil lawsuit against the blatantly bogus Trump University. Once in office, Trump continued to attack federal judges after a succession of rulings that partially blocked his Muslim travel ban.

Thanks to the Framers of the Constitution, Trump cannot fire federal judges, as some authoritarian leaders can do. But with clouds hanging over Robert Mueller's tenure as special counsel in the Russiagate investigation, Klaas notes that the Turkish prime-minister-turned-authoritarian-president, Recep Tayyip Erdogan, dismissed four prosecutors who were investigating allegations of corruption within his inner circle.

“When rule of law becomes a threat to their own survival,” Klaas writes, “despots try to undermine it.”

Even while denigrating the Mueller investigation, Trump and his supporters continue to call for an investigation of Hillary Clinton's use of a private email server while secretary of state. Klaas recalls the anti-Clinton clamor from the presidential campaign in a chapter entitled “Lock Her Up” and notes his own interviews with jailed former presidential candidates in such authoritarian-ruled countries as Madagascar, Zambia, Belarus, and Tunisia. Despots relish what Klaas calls “the power to prosecute the innocent and protect the guilty.”

Trump's seemingly uncontrollable habit of lying also mimics democracy-destroying oppressors going back to Adolf Hitler. Klaas likens Trump's critique of “FAKE NEWS” (always in all-caps) to Hitler's attacks on Lugenpresse, or the lying press. “To erode democracy, you must first erode truth,” the author writes, “and this is precisely what Donald Trump is doing in America.”

Trump's “normalized dishonesty” falls short of the double-think of the Orwellian Big Brother of 1984, but it is still having an impact: Nearly half of Republican voters believe Trump actually won the popular vote in 2016, an example of what Trump counselor Kellyanne Conway calls “alternative facts.”

Trump also falls short of the worst of the worst in terms of actual brutality, with no instances of the kinds of extrajudicial imprisonments and executions seen under many authoritarian regimes. But Klaas notes Trump's endorsement of these practices in such “illiberal regimes” as Vladimir Putin's Russia and Rodrigo Duterte's Philippines.

Klaas closes with crystal-ball gazing. Among four scenarios, he envisions the possibility of continuing democratic decay under a second Trump administration or more of the same under a more palatable candidate: so-called Trump 2.0. In dystopian fashion, Klaas envisions the possible emergence of a true American authoritarian after some catastrophic terrorist attack deadlier, by far, than 9/11.

More hopefully, however, he suggests that Trump's tenure could serve as a vaccine, inoculating Americans against further infection by authoritarian policies and politics. For that ending, he sees the need for “an enormous public mobilization” and “a new ethos of civic engagement.”

Democracy can be saved, Klaas concludes, but the future rests with Americans ourselves. Trump reminds us, he writes, of “the most important duties of patriots: to dissent and oppose.”