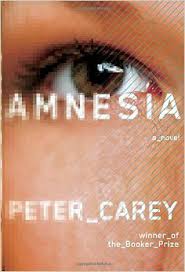 In his latest work, Amnesia, Aussie Booker Prize-winner Peter Carey delights readers once more with his wicked wit, mastery of style and voice, and gift for lyrical description. After novelistic excursions to England, France, and America, his home these last 25 years, Carey, in Amnesia, returns to Australia and its enduring obsession with outlaw culture.

It was a theme he explored years ago in the rollicking True History of the Kelly Gang, the fictionalized autobiography of an iconic 19th-century bushranger. But his fugitive protagonists here are Robin Hoods of the Information Age, and below the bright comic surface of this quirky yet engrossing novel fester dark, all-but-forgotten wounds.

The heroine of Amnesia is youthful environmentalist and hacktivist Gaby Baillieux. Her lover and partner in cybercrime is an eccentric computer genius named Frederic, whose resemblance to Australian Wikileaks mastermind Julian Assange is no accident, Carey having briefly considered a proposal to ghostwrite Assange’s autobiography.

Gaby and Frederic first achieved notoriety by exposing official complicity in the dioxin poisoning of a Melbourne creek. More recently, they have become public enemies after boldly disarming security software that controls super-max prisons in Australia and the United States, allowing prisoners in both countries to bolt for freedom.

Gaby’s sympathy for the underdog and her passion for revealing unsavory secrets also animate Felix Moore, the grizzled, likeable journalist who will become her chronicler. As Amnesia opens, however, his personal life and his career as left-wing muckraker are in tatters. The subject of his most recent exposé has just won a defamation suit against Felix, and the high court of New South Wales has awarded damages he can’t possibly pay.

To make matters worse, he accidentally burns his own house down while trying to set fire to his unsellable defamatory books, and his homeless family abandons him. Like debt-ridden Tobias Oates in Carey’s Dickensian Jack Maggs, Felix “Moore-or-less-correct,” as his journo mates patronizingly call him, is a writer under serious pressure to pen something big.

He is therefore elated when Woody Townes, a tycoon with possibly dodgy motives, pays him a handsome commission to write a book telling the world Gaby’s story. But things quickly get complicated. Townes may be using Felix as a catspaw to lead him to her hideout, in hopes of turning her over to the CIA for rendition over the super-max caper.

Gaby’s self-absorbed mother, Celine, wants Felix to write a book proving her child is innocent, or at least that her crimes — if there are any — could not possibly be blamed on faulty parenting. The young woman herself, when at last he tracks her down, insists the journalist portray her as the anarchist warrior she is. While she sympathizes with her mother’s chagrin, Gaby observes with steely, fanatical grit that it “does not occur to her that we might possibly defeat them.” Them, of course, being “the Establishment.”

As a loyal soldier of the Left, Felix shares Gaby’s animus toward the Establishment, both for its complicity in befouling his country’s natural beauty and because he sees it as sadly servile to the American imperium. Indeed, in the view of Felix — and Carey, as well, to judge from interviews — Australia’s “Great Amnesia” has been consigning to the Orwellian memory hole an alleged CIA conspiracy that, in 1975, brought down an un-submissive Labor government.

As Felix flees Woody Townes from safehouse to safehouse while trying to stitch the truth together from tapes recorded by Gaby and Celine, it becomes clear that other traumas, both personal and political, some going as far back as World War II, continue to poison the present.

In the second half of the book, which consists largely of those transcribed recordings, stretches sometimes ramble, and one may wonder where the author is going. But the delightful aperçus Carey strews along the path well reward the reader’s patience. He describes, for example, the massive gates of a mansion Gaby visits as “four-meter-high spears tipped with gold fleurs-de-lis, like the owners were waiting for the revolution.”

At another juncture, when Felix is briefly and unexpectedly the object of lavish attentions, he experiences that “excitement which arrives, inevitably, when one is cast into a decadent situation without it being in any way one’s fault.”

Later on, as it becomes obvious that the book we are now reading is the one Felix is writing, he concedes disarmingly that “the omniscient narrator had a very wobbly grasp of what was happening.”

And in the concluding pages, Carey shows he is still at the top of his game by almost magically pulling the meandering threads together in a coup de théâtre that leaves the reader breathless and — surprisingly — even hopeful.

Howard Davis is a former journalist and aficionado of spy stories and Chinese Cresteds. He and his wife, together with their Cresteds, live in suburban Virginia.