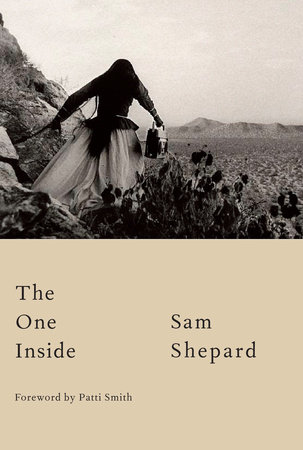 “They’ve murdered something far off. Fighting over it. Yes. Screaming. Doing their mad cackle as they tear into its softness. He’s awake — 5:05 a.m.”

Sam Shepard is an early riser. Out of the chute, the Pulitzer Prize-winning playwright and actor goes straight for the throat in his latest literary offering, The One Inside, setting the tone for a sprawling, strikingly beautiful raw-bone odyssey where the past stalks the present like a specter that can find no rest; where the living cannot break the chains of the dead.

Despite how far the living run, seeking feeble solace in the brambles of isolation and rootlessness, the roots are never severed, while the same blood still stains the ground. Create an identity, but you’ll always be who you are. In essence, The One Inside is pure Sam Shepard — an American master of the surreal, the gothic, and the ties that bind.

“They’ve come and gone, these characters, like brief, violent love affairs…Forty some years of it. Too big. Hard to believe. Too vast. How did I get in here?”

Our narrator (let’s just call him the Actor) has a body that’s breaking down. He’s taking pills prescribed by an acupuncturist, but he’s not sure what they’re for. That’s not his only problem. The Actor is dealing with the sudden breakup with his wife of almost 30 years; and he’s got a young female companion — the Blackmail Girl — threatening to publish their conversations she’s recorded in a tell-all book.

And then there is the matter of his dead father, who visits him in a bombardment of visions. Tagging along is the ghost of Dad’s teenage girlfriend, Felicity, whom the Actor also slept with in his youth.

“Her mouth opened and I saw tiny animals escaping, tiny animals that were trapped inside her all this time,” the Actor remembers. “They flew out as though something might catch them and drag them back into imprisonment. I could feel them land on my face and crawl through my hair, searching for a hiding place. Each time she screamed, the animals flew out in small clouds like tiny gnats: little dragons, flying fish, headless horses.”

What’s a man to do? He runs, his whole life in pursuit, chasing him from the Santa Fe hills to the Oklahoma plains, every highway in between, no compass point untouched — real or imagined. With every memory, the Actor confronts a mile in a country that no longer exists; America is a ghost town, a movie set at best.

Described as “a work of long fiction,” The One Inside is a complex and fascinating read that straddles myriad forms. The author of more than 55 plays, including “Buried Child,” which won the Pulitzer, and three story collections — as well as roles in 60-plus films — Shepard, 73, knows what he’s doing.

Broken into short, fractured chapters, the book deftly navigates between traditional novel narrative, lyrical prose, and straight-up dialogue. A culmination of a life’s work is at play all at once, and every inch is infused with Shepard’s muscular prose, wry humor, keen eye, and rhythmic flourish. You feel as if he’s pulled the tanned leather right from his boots and the worn indigo fabric from his favorite pair of jeans.

Shepard once said he had no interest in writing an autobiography. “In a way, all the plays have been autobiographical, but not confessional…I've never read an autobiography where the protagonist isn't the hero of his story.”

At times, The One Inside strikes a memoir vein: allusions to the author’s split with longtime partner Jessica Lange, his tumultuous relationship with his alcoholic father, and his own struggle with the bottle. What does it matter? As Patti Smith writes in her wonderful foreword, “I set down the manuscript. It’s him, sort of him, not him at all. It’s an entity trying to break out, make sense out of things.”

After more than five decades of crisscrossing the country, putting rubber to asphalt, pen to journal, and pounding typewriters on “real paper,” Shepard can tell his story any way he damn well pleases. Let’s hope he keeps sharing.