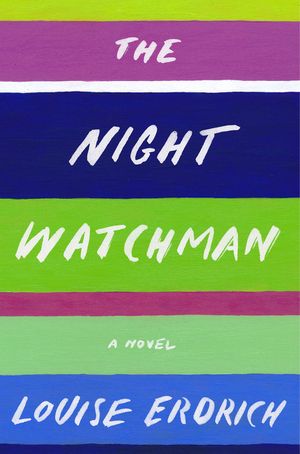 Louise Erdrich, in her 16th novel, returns to North Dakota, to the Turtle Mountain Reservation of her tribe, the Chippewa. The author’s afterword explains she was recovering from a winter virus, short of writerly confidence and inspiration, when she reread her grandfather’s letters written in 1953 — the year of her birth.

At that time, a bill before Congress threatened to terminate the tribe’s rights to the reservation land and enforce involuntary resettlement in cities. Her grandfather was the chairman of the Turtle Mountain Band of Chippewa Advisory Committee to the Bureau of Indian Affairs.

His committee had no legislative leverage, nor financial resources, but mounted a strategic resistance to the termination proposed by the bill. Her grandfather’s response to the threat inspired The Night Watchman, and he is the model for its protagonist, Thomas Wazhusk.

Thomas is night watchman at the factory on the reservation where “jewel bearings” are made for ammunition and watches. He is also chair of the Turtle Mountain Band’s advisory committee, the unofficial watchman over the entire tribal community and its way of life. In the dark hours of his shift, he reads, reflects, and is visited by memories and the occasional spirit.

Perusing the bill, he immediately sees through its language and recognizes its true intent:

“The author of the proposal had constructed a cloud of lofty words around this bill — emancipation, freedom, equality, success — that disguised its truth: termination. Termination. Missing only the prefix. The ex.”

His recognition of the problem posed by the bill sets the story in motion. But this is not a “problem novel,” not the superficial dramatization of historical tableaus performed at national parks, nor an allegory populated by stereotypes.

The Night Watchman is indeed historical, thoroughly researched, rich with cultural and topical detail. However, what engages the reader most deeply are Erdrich’s characters: people, ghosts, even animals. As for the human cast, some of them are directly involved in responding to the legislative threat; others just live their complicated, difficult lives.

Through the eyes of diverse members of the community at this critical moment — a moment which illustrates and threatens to exacerbate past exploitation — Erdrich crafts another volume in her chronicle of the extended family of the Chippewa tribe.

The author’s narrative voice has been compared to Steinbeck. Taking into account her entire body of work, the comparison seems apt. Here, The Grapes of Wrath comes particularly to mind as The Night Watchman is a resonant saga of Thomas’ family and friends, representatives of the marginalized, vulnerable community.

The characters, both major and minor, all matter. Thomas’ niece says of her mother, “Zhaanat’s thinking was built on treating everyone around her with great care.” Great care is exactly what Erdrich shows for everybody in the novel. Each character — sympathetic and unsympathetic alike — is rendered in the round with attention and respect. The reader comes to care about almost everyone, from a Mormon missionary in love with a Chippewa to the central narrators, Thomas and his niece Patrice.

Patrice works in a factory on the assembly line. She is by default the unofficial guardian of her immediate family, watching over her mother and siblings, assuming the financial and caretaking responsibilities unfulfilled by her absent father, an abusive alcoholic.

The immediate crisis she faces is that her elder sister Vera left to seek her fortune in Fargo and has disappeared. Rumors suggest she has had a child; Patrice and her mother, Zhaanat, are both visited by the same troubling dreams about Vera.

Patrice goes to Fargo, seeking to rescue her sister and the rumored baby. The trail leads her into bars and brothels — and a very immediate threat of personal extermination. Patrice’s own struggle against exploitation and her endeavor to save her sister, along with Thomas’ efforts on behalf of the tribe, become related, intertwined narratives.

Both the story of the tribe and the story of the individual family plumb grim history and circumstances, but the novel is neither grim nor a lament. Rather, it is a tale of resistance, courage, and love prevailing against the odds.

Some readers may question such optimism and hope and doubt the tentative, nuanced resolutions achieved by the tribe and Thomas’ family. But any reader in this present, dark winter of 2020 open to reminders of what a few good people can do will find The Night Watchman bracing and timely.

Ellen Prentiss Campbell’s collection of love stories, Known By Heart, is forthcoming in May 2020. Her story collection Contents Under Pressure was nominated for the National Book Award; her debut novel, The Bowl with Gold Seams, won the Indy Excellence Award for Historical Fiction. For many years, Campbell practiced psychotherapy. She lives in Washington, DC, and is at work on a novel.