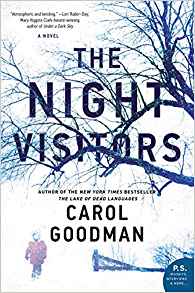 Even in a small, idyllic town that wears the ordinary like a tight-fitting suit, things aren’t always what they seem.

The story told in The Night Visitors is social justice woven into a thriller: Enter a middle-aged spinster who hasn’t experienced what life has to offer, a mother and son on the run from an abusive man, and a family legacy that hoards its shameful secrets.

Mattie Lane is the spinster on the downward side of 50, her life revolving around the local shelter for battered women and the food pantry. Alice is the woman trying to escape an abusive relationship, dragging her 10-year-old boy, Oren, onto a bus that lands them in the small New York village of Delphi. Alice and Oren need a safe place to stay, and Mattie will arrange for one. But a blizzard has other plans; it forces Mattie to take the pair in for the night.

But Alice doesn’t trust do-gooders, imagining they only want to make themselves feel better about their lives by helping people worse off than they. Mattie is the epitome of the abused-woman’s hero: old and frumpy, living in a falling-down mansion by herself, with only an ancient dog for company. Everything she does is selfless.

But what does she know about abuse — or kids, for that matter? Alice has learned firsthand there are no safe spaces in the world.

Mattie knows it is against the rules to take Alice and Oren home. But what choice does she have? And Oren reminds Mattie of her little brother, Caleb, who’d died when he was 10 — Oren’s age. How uncanny that Oren also loves Star Wars, constantly making up stories for the action figures he carries everywhere.

Spookier still is the way Oren feels Caleb’s presence; he even talks to him. Could Caleb’s spirit be there in the house?

As Mattie makes plans for moving Alice and Oren to a safe location, the small things she notices — Oren’s discomfort at his mother’s touch, the way he calls her “Alice,” and the strained dialogue between the two — make her wonder if Alice really is his mother, and whether Oren’s father is even the abuser.

As their second night passes together, strange things happen, making Mattie wonder if she is losing her mind, like her mother did before her whole family died from carbon-monoxide poisoning.

When intruders break into Mattie’s house, the secrets from the past unravel like a frayed sweater, and justice comes in the form of a child. Alice now knows the truth about Mattie and her family, but does her newfound trust come too late?

As I turned the pages, details of Mattie’s prior life as an all-powerful-judge’s daughter were slowly revealed, surprising me with long-ago secrets hidden by her mundane exterior, ending with an unexpected climax. Mattie and Alice each learn from the other that people are far more complex than they seem.

The social commentary at the core of The Night Visitors drew me in with its relevance to our current societal and political climate. The issues of physical and emotional abuse, teen pregnancy, juvenile delinquency, and moral dilemmas are at the heart of both Mattie’s and Alice’s struggles. Author Carol Goodman shows us that decisions made to address trauma can be life-affirming or morally deficient, and we can change our life’s trajectory by owning the truth.

Goodman’s recipe — mixing emotional and physical abuse, mistakes made, and a young person’s misdirection with suspense, mystery, and a touch of paranormal intervention — makes for an emotion-filled treat for readers as we fly through the story. I can’t wait for seconds.

K.L. Romo writes about life on the fringe: Teetering dangerously on the edge is more interesting than standing safely in the middle. She is passionate about women’s issues and loves noisy clocks and fuzzy blankets, but HATES the word “normal.” Find her on Twitter at @klromo.

After a lengthy incarceration, a troubled woman returns to Appalachia and attempts to set her life right.