The Forgers: A Novel

This whodunit has a clever premise, but that might not be enough. 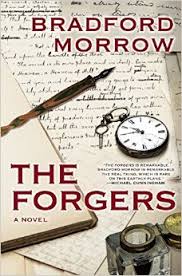 Adam Diehl lies unconscious and bloody on the floor of his cottage in the Hamptons. Heaped around him are piles of shredded letters and priceless manuscripts, along with destroyed signed works by Dickens, Twain, and others. The books’ spines are broken, their pages torn. With so much carnage, it’s impossible to tell whether anything is missing.

Who would attack the reclusive rare-books dealer (and closet forger), make off with his appendages, and manage to leave not a trace of physical evidence behind? That’s the mystery at the heart of Bradford Morrow’s The Forgers. The setup is interesting enough, but the follow-through leaves something to be desired.

Lingering for 10 days before succumbing to his injuries, Adam never wakes up and so can’t identify his killer. Solving that riddle is left to his adoring sister, Meghan, and her fiancé, the story’s narrator. Mentioned by name — Will — just once, he shared a bond with the dead man, if not a friendship.

“You see, like Adam, I myself was once a forger…There was a time in my life when nothing gave me more joy than forging letters and manuscripts by my favorite writers…When I conceived and penned the inscription of an esteemed master…an edgy sublimity settled over the moment. It was like electric stardust, say, or a kind of aurora borealis of the mind. Truly, happiness beyond words.”

But then he got caught. Sentenced to pay restitution and forswear ever plying his craft again, the narrator slowly regained some standing as a rare-books expert and started putting himself back together (thanks largely to Meghan’s unwavering support). Then, in the weeks and months following Adam’s death, he receives cryptic threats in the mail.

“They may not know who killed Adam Diehl but I do.” The letter, like others the narrator soon accumulates, is signed “A Conan Doyle” and written in a perfect imitation of that author’s script.

It doesn’t take long for the narrator to identify the correspondent: Henry Slader, another nefarious bibliophile whose path has crossed that of both the narrator and Adam. But why would Slader try to pin the murder on the narrator? What — if any — proof does he have?

And, as it turns out, who cares? The narrator is so wholly unlikeable that it’s tough to gin up much concern for his future. Although he claims to have emotions — “after the first flush of shock [over the threatening letter] wore off, my feelings graduated to something I wasn’t at all used to. I became angry. Very angry” — they are muted and unpersuasive.

How do we know he’s upset? Does he fling a first-edition Ulysses across a Greenwich Village diner? Rage against the heavens at Samuel Pepys’ impossible-to-replicate cursive? Rend his garments over the diminishing likelihood that he’ll ever score an original Canterbury Tales?

Nope. He just tells us — the same as he does when he’s tired, flustered, or mildly headachy. In fact, it’s far too much tell, nowhere near enough show.

This hollowness is starkest in the character of Meghan. Ostensibly smart and self-sufficient — she owns a bookstore in New York City and mothered older brother Adam after their parents died — her doe-eyed commitment to the narrator defies logic and may be the novel’s biggest mystery.

Her words upon first learning of his forgeries: “‘You have such amazing knowledge and skill,’ she assured me. ‘It’s only a matter of putting them to work in ways that benefit not you but others.’”

This is a woman whose world revolves around books. That her fiancé has just been arrested for perpetrating a huge, ongoing fraud in that world? Eh. Whatever.

Throughout The Forgers, Meghan’s dedication is saintly, her empathy boundless. Regardless of the circumstances, says the narrator, “Meghan…returned my love daily with great devotion, patience, and kindness.”

After catching him in what feels like a lie surrounding the details of Adam’s death, Meghan quickly dismisses her doubts and then “tucked her hair behind her ear and offered me one of her smiles so richly touched by love that I felt there were few men alive more fortunate than I.”

Shortcomings aside, there is one compelling thing about The Forgers, and that’s the universe it inhabits. The cloak-and-dagger world of rare books — with its five-figure tomes, cutthroat dealers, and impassioned collectors — is unique and surprising, and learning of it is akin to stumbling upon quilting’s seamy underbelly or the dark side of philately.

Regrettably, the novelty isn’t enough to sustain the story. Despite a plot that carries the narrator, Meghan, and the tenacious Henry Slader from America to Ireland and back again, there’s little authenticity to carry the reader’s interest. In the end, the characters in The Forgers are as thin as a sheet of parchment whose text, though convincing in spots, turns out to be fake.

Holly Smith is managing editor of the Independent. Her absurdly illegible handwriting is unforgeable.