A Quiet Cadence: A Novel

A grisly, searing portrayal of how combat and its aftermath affect Marines in Vietnam. 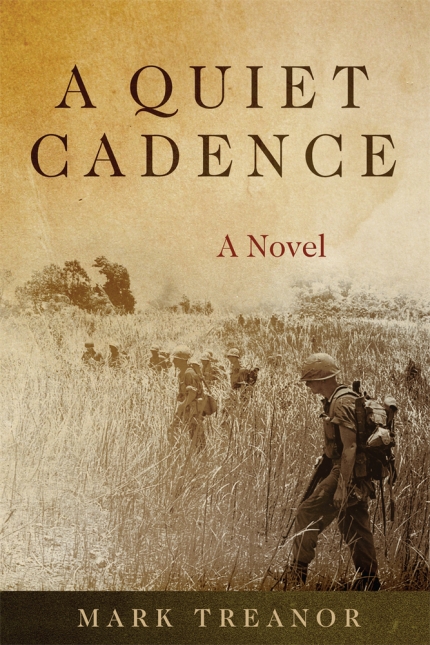 This novel is my book, writ large. I spent the better part of 13 years on the battlefields of Vietnam, much of it working with Marines. More than half of Mark Treanor’s A Quiet Cadence, which begins in 1969, is devoted to accurate and gory description of Marines in combat there.

The unit portrayed is the first platoon of “Bush Bravo,” a company whose motto is “We count the meat.” I can personally vouch for the gruesome accuracy of the battles described. The protagonist, Marty “the Mick” McClure, drops out of college at 19, joins the Marines, and ends up assigned to combat with the first platoon. During the course of the story, the reader meets 20-odd other Marines who work with and fight beside McClure.

Among the most prominent is Pius John Garafano, named after popes and dubbed “the Pope” by colleagues. Woodie Woodson stands out as conspicuously handsome. Corrie Corrigan, “the Professor,” has a bachelor’s degree — that makes him unique. These and the other Marines come across as distinct individuals; their eccentricities add to the story’s authenticity.

At the heart of A Quiet Cadence is the damage combat does to the warrior’s soul. McClure is permanently scarred. He describes it thus:

“In Vietnam we tried to compartmentalize our worst traumatic experiences. Put everything — the sights, sounds, smells, and fears — in a box and put the box on a shelf. It was years before I took some of those boxes down; more years before I stopped opening some of them. Sometimes, even now, some lids pop off when I’m not expecting them to.”

Early on, Garafano warns McClure about the “blackness” that darkens the soul as a result of combat. Later, McClure muses about his own feelings:

“My stomach hurt. I wasn’t sure what emotions I was experiencing. Anger? Grief? Fear? Probably a mix of all those. I’d never dealt with such heightened feelings as a boy. But I thought about Jackson and Corrigan, O’Grady, Cavett and Prevas, and now Tich and poor Dasmund and how they’d been so horribly wounded or killed. And I knew, even if I wouldn’t have been able to articulate the thought at the time, that a darkening brew was seeping into my soul.”

McClure’s sense of the darkening worsens when he returns to the United States and civilian life, where he is accused of being a butcher and baby killer. He rebels at the suggestion that he suffers from post-traumatic stress disorder (PTSD): “The only people I’d read about who’d been diagnosed with that seemed to be jobless or homeless guys running around in their cammies” (camouflage utility uniforms).

But as author Treanor makes clear with repeated descriptions, it is indeed PTSD with which McClure is coping. As a sufferer myself, I recognized the unmistakable symptoms — flashbacks, nightmares, irrational rages, panic attacks, depression — “the darkening brew…seeping into my soul.” The malady stalks McClure through the rest of the book as he becomes a teacher, a husband, and a father.

Treanor’s writing is clear, distinctive, and true. It is sophisticated prose marked by poetic flourishes and moored in military slang. He describes one Marine thus: “He smelled of fear, sharp and sour and bitter at the same time. A smell like a color, filthy yellow-brown streaked with green.”

The text is peppered with Marine-speak and technical military terms, none of them explained or defined. The Vietnamese are referred to disparagingly as “gooks” or “gooners.” Adjectives are split with “fucking” stuck in the middle, as in “fan-fucking-tastic.” Obscenities and expletives abound, as indeed they did on the battlefield. The fatalistic sentence “There it is,” meaning “That’s the way it is in this war,” appears strategically. And Treanor always capitalizes “Marine” out of respect, as do I.

The fall of Saigon in April 1975 embitters McClure. After fighting so hard and giving up so much, after having watched so many die, after facing angry mobs in the United States, after being spat upon and reviled, he watches as the United States withdraws in shame.

When the Vietnam Memorial, known as the Wall, is completed in 1982, he refuses to go see it, not wanting to remember those who died. Corrigan, who lost a leg during combat, tells him about the Wall, in the process spelling out a truth anyone who has undergone combat knows:

McClure still avoids the Wall. Then, in 1983, on impulse, he meets with Woodson’s parents, who show him the framed rubbing of Woodie’s name they made themselves at the Wall. McClure is deeply moved. He ponders how “all of us marched to the same quiet cadence of belief in each other and America and in the value of serving something bigger than ourselves.”

That September, McClure finally visits the memorial. He finds the names of those who fought and died by his side. In tears, he kneels and leans against the Wall. Another Marine veteran who has been watching him pulls him up and says, “Welcome home, Marine. Welcome home.”

In an honored place on a wall in my house is a photograph of jungle combat boots from Vietnam. The picture is captioned, “Do what you have to do, whatever it takes.” The empty boots imply that their owner gave up his life in defense of his country. A Quiet Cadence is the literary equivalent of that picture. It is the most powerful book on combat during the Vietnam War that I have read.

Between 1962 and 1975, Tom Glenn was in Vietnam more than he was in the United States. His work was supporting U.S. forces in combat with signals intelligence targeting the North Vietnamese military forces. In April 1975, he escaped under fire as Saigon fell. Now a fulltime author, he has five novels and 17 short stories in print. His most recent novel, Secretocracy, was published in March.