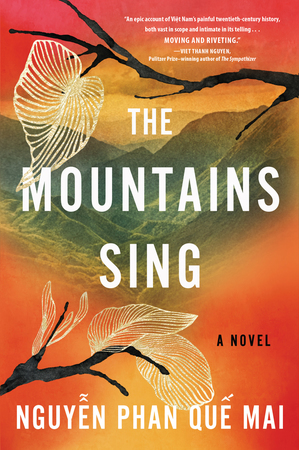 Quế Mai’s sweeping The Mountains Sing tells the history of the Vietnamese Trần family from 1930 to 2017. The reader follows the members of the clan through the Vietnamese war against the French, the Japanese occupation, and the war between North and South Vietnam which led to the expulsion of the Americans in 1973 and ended in 1975. Most of the story focuses on Grandma Diệu Lan (born in 1920) and her granddaughter, Hương (born in 1960).

The story is not told chronologically. It begins in 2012 with Hương incensing her ancestral altar to honor the memory of her grandmother. It ends in 2017 with the same ritual, this time performed by Hương, her husband, Tâm, and her two children. In between, it traces the travails of the Vietnamese through the droughts and famines, the land reforms by the communists, and 40 years of war.

The reader follows Diệu Lan, forced off her farm by the communists, as she flees to Hà Nội, parting with four children en route. Her grandchild, Hương, grows up during the war with the South and watches her father, mother, and uncles head down the Hồ Chí Minh Trail to fight the Americans.

The book’s author, Nguyễn Phan Quế Mai, is a poet. Her text is embroidered with poetic phrasings. “I held the broom, sweeping sunlight into piles,” she writes at one point. Voices rise like kites. The blossoms of a longan tree spread a dome of pearls atop the green canopy. Diệu Lan sees herself as a butterfly who’d “lost its wings, a tree who’d forsaken all of its leaves and branches.”

The book is also distinctly Vietnamese. A reader not familiar with Viet customs may wonder why characters who are not related by blood nevertheless address each other using familial nouns (sister, brother, auntie, uncle, grandmother, and so on). But this potentially confusing choice lends a rich cultural texture to the story, giving Western readers a feel for Vietnamese society.

Words, phrases, and sentences in Vietnamese are scattered throughout the text, always with a translation or explanation appended. Even so, my knowledge of Vietnamese helped at moments when the English was vague. That said, I can attest that the author’s translations were accurate.

Quế Mai, throughout the book, uses the tone marks and diacritical unique to the Vietnamese language for both the names of characters and places and for quotations in Vietnamese. For example, she renders the name of the capitol of North Vietnam as Hà Nội rather than Hanoi. That usage may puzzle some readers, but I found it helpful in its precision. After all, the Vietnamese syllable “mon” can have 18 different meanings depending on the combination of tone and diacritical.

Quế Mai’s American English usage is strikingly good for a writer who is not a native speaker. Here and there, I found sentences that struck me as odd, but given the context — a Vietnamese story with Vietnamese characters — the unusual wording felt apt.

Despite the tragedies and suffering strewn throughout the story, The Mountains Sing, as the title suggests, is positive and hopeful, looking forward to a better future. Diệu Lan tells Hương that “the challenges faced by the Vietnamese people are as tall as the tallest mountain.” Hương must step away from the currents of life to have the full view. When she does, the mountains sing.

The story Quế Mai tells is familiar territory for me. But the positive outlook surprised me, given the suffering of the characters during years of disaster and war. Once again, I was impressed with the toughness of the Vietnamese. They face profound adversity with a stalwart steadiness unmatched by any other nation I know of. I came away at the end of the book with a new appreciation for the courage and resourcefulness of the Vietnamese.

Tom Glenn, who speaks Vietnamese, Chinese, and French, the three languages of Vietnam, was in Vietnam at least four months every year between 1962 and 1975. His work was signals intelligence targeting the North Vietnamese. Now a fulltime author, he has four novels and 17 short stories in print, with two more books due out in 2020.