The Missing American Jury: Restoring the Fundamental Constitutional Role of the Criminal, Civil, and Grand Juries

A law professor makes a case for revitalizing a once-ubiquitous component of the U.S. justice system. 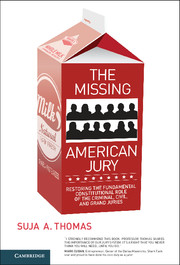 Jury trials became part of the United States’ legal system with the ratification of the Constitution, even before the Bill of Rights was added to satisfy opponents who worried about the fate of liberty under the new national government. In establishing the judicial branch, Article III provides that the trial of “all crimes,” except in cases of impeachment, “shall be by jury.”

The Sixth Amendment strengthened that provision by giving defendants “the right to a speedy and public trial, by an impartial jury.” The Fifth Amendment established the antecedent right to be brought to trial only after “a presentment or indictment of a grand jury.” And the Seventh Amendment guaranteed that the right to jury trial “shall be preserved” in “suits at common law” if the amount at stake exceeds $20.

Suja Thomas, a professor at the University of Illinois College of Law, cites these provisions to introduce what she calls her “novel argument” that juries are a fourth branch of government — as much a part of the constitutional system as Congress, the president, or the Supreme Court. And just like those other branches, juries were seen as a “significant check” to balance the powers of the others.

Colonial juries served that very purpose, as in the Zenger case, a landmark in the history of freedom of the press. A jury in New York refused to convict printer John Peter Zinger for publishing criticism of New York’s royal governor. The Declaration of Independence condemned King George for, among other things, “depriving us in many cases of the benefits of trial by jury.”

However venerable the American jury may be, it now plays a vastly diminished role in law and justice. The criminal jury trial is a rarity. The vast majority of cases in federal and state courts are plea-bargained out in a system that gives virtually unchecked power to prosecutors, who are executive branch officials. Civil jury trials are fewer and fewer also. Many cases are settled or dismissed by judges before trial; many others are diverted from the court system by the growing use of arbitration.

The jury has not simply gone “missing,” as Thomas puts it in the title, but has been taken prisoner, “subjugated” by the other branches to “a place of unequal footing.” Thomas notes that when the Supreme Court, in 1978, legitimized plea-bargaining as an “important” component of the criminal justice system, it did not discuss Article III, the Sixth Amendment, or the jury’s role as a check on government. In civil cases, the Supreme Court has upheld laws that give administrative agencies, rather than juries, decision-making roles over newly created causes of action.

Less well known, federal and state judiciaries have crafted new rules of civil procedure — approved by Congress or state legislatures — that allow judges either to keep cases away from juries or to set aside jury verdicts after the fact. Thomas questions the constitutionality of the widely used “summary judgment” procedure, which allows judges to decide cases based on depositions and pleadings with the jury eliminated.

Thomas makes no effort to catalogue all the great jury verdicts of U.S. history, nor all the wrongful convictions, wrongful acquittals, or runaway civil verdicts. But she briefly summarizes the case against the jury: cost, incompetence, inaccuracy, inefficiency. The cost in particular is the reason most often cited for the failure to make states comply with the Fifth Amendment’s requirement for grand juries in criminal cases or the Seventh Amendment’s requirement for juries in civil cases.

Thomas instead emphasizes the virtues of juries: diversity, deliberations, and consensus. Juries are more representative of the general population than the judiciary and, of necessity, must deliberate together and attempt to reach consensus. Some studies indicate that present-day juries still perform the role of safeguarding individual rights. Judges are somewhat more likely to convict than juries, according to studies, and likely to award somewhat lower damages in civil cases.

Juries in other countries are much different from the American jury, but Thomas shows that juries are gaining in influence elsewhere even as they are less and less relevant in the United States. By way of reforms, Thomas proposes a “plea offer requirement” in criminal cases that would force the prosecutor to tell a jury the plea deal offered to a defendant. In civil cases, a “consensus requirement” would preclude reversal of a jury verdict on appeal unless the judges reached broad agreement: no 5-4 second-guessing.

The prospects for these or any other reforms are cloudy at best. To borrow Alexander Hamilton’s phrasing about the judiciary, juries have neither the power of the purse or the sword — or public opinion. But Thomas closes with the hope that the jury will someday “occupy a place more akin to the constitutional role it was intended to serve in the government.”

This engaging and disturbing look at how big money changes everything reads like “Game of Thrones” in a business suit.