The Mechanical Horse: How the Bicycle Reshaped American Life

A fascinating look at the two-wheeled wonder's place in society 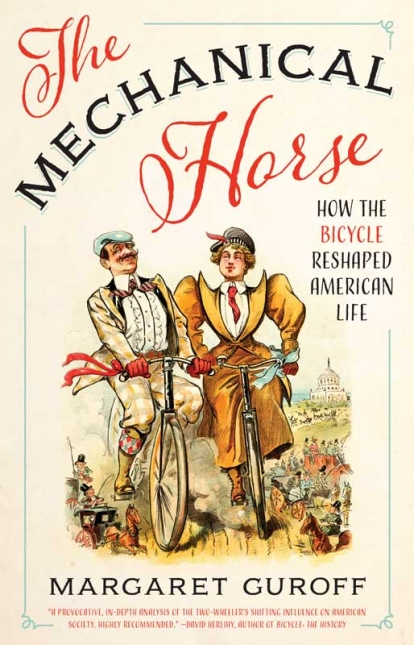 I have a bias. I love my bike. It’s a sleek, fast, feather-light, red-and-white Novara roadster with super-skinny tires, carbon frame, Shimano gears, and three Century rides under its belt.

I’ve had bikes since I was a kid in the 1950s, and I remember them all. The ten-speed I took to college in the 1960s remained my primary way of getting around till long past law school, even living in urban Washington, DC, in the 1970s. To this day, I love sneaking away from the office on sunny afternoons for long rides on Virginia’s W&OD trail. I ride the Seagull Century on the Eastern Shore with the same group of friends every year and plan to keep it up as long as my body lets me.

Bikes have always been part of my life, and that, according to Margaret Guroff in her fine new book, The Mechanical Horse: How the Bicycle Reshaped American Life, is the whole point. If you love your bike (or ever had a bike you loved), you will love and appreciate it even more after reading this book.

In a narrative rich in history and based on formidable research (complete with 106 pages of reference notes and bibliography), Guroff tells us a story of culture, society, and how the bike shaped both. She takes us from the dawn of the machine, the draisines of the 1790s (basically just wooden frames with two wheels that you pushed with your feet), to the velocipedes of the 1870s (the silly-looking ones with the big front wheels), to the sleek ten-speeds of the 1960s, right up to today’s aerodynamic racing bikes, mountain bikes, electric bikes, bike shares, and the rest. Along the way, she shows us how the invention acted as a force for liberation at each turn.

P.T. Barnum featured bikes in his fabulous circus shows of the 1880s. Bikes in the 1890s emancipated women by allowing them out of the house and out of the corsets, petticoats, and other restrictive Victorian-era clothes. Susan B. Anthony herself, champion of women’s suffrage, conceded in 1896: “I think [bicycling] has done more to emancipate woman than any one thing in the world.”

Bikes modernized medicine in the early 1900s by revolutionizing views toward fitness and exercise. Bikes sparked the first American movement for flat, paved roads and laid the groundwork for cars through the invention of pneumatic tires, differential gears, ball bearings, and mass-produced frames. Henry Ford built bicycles before building automobiles. Orville and Wilbur Wright built bicycles before building the first airplane in 1903. The connections keep coming.

Bikes spawned the first consumer advertising campaigns, helped pioneer suburbs, and even inspired Albert Einstein to conceive his theory of relativity. Einstein rode a bike often when young, feeding his early sense of relative motion among physical objects. “Life is like riding a bicycle,” he wrote once. “To keep your balance, you must keep moving.”

In our own lifetimes (at least for aging baby boomers like me), bikes created the classic American childhood of the 1950s, giving kids the freedom to explore the streets beyond their own neighborhoods and escape their parents’ watchful eyes.

Bikes became a political statement in the 1960s — pro-environment, anti-corporate, and the easiest way to navigate the big protest demonstrations of the era. By 1972, 85 million Americans counted themselves as bicycle riders, up from a mere 3 million in the 1890s. It was enough to shake the world. In Europe, bikes continued to outnumber cars for most of the 20th century.

Not all was positive and good, of course, and Guroff doesn’t hide the negatives and irritations. She reminds us how bicyclists have been annoying people walking on sidewalks since the 1880s — causing some cities to impose nuisance rules against them — and big-city bike messengers have been snarling traffic for decades.

But what comes through most strongly in this nicely written, fast-paced narrative is Guroff’s love for her subject. If you adore your bike, you’re curious about where it came from, and you’d like to read about how it’s changed the world, then buy this book. It’s that simple.

For me, it’s easy. Even as I sit here in the office typing the final words of this review, I can’t help but feel the itch. Looking out the window, it’s sunny with a light breeze and people are in short sleeves. A great day for a bike ride.

Kenneth D. Ackerman’s latest book, Trotsky in New York, 1917: Portrait of a Radical from Times Square to Petrograd, is set for release in September 2016. He is also the author of Boss Tweed: The Corrupt Pol who Conceived the Soul of Modern New York, as well as biographies of James A. Garfield and J. Edgar Hoover.