The Marauders: Standing Up to Vigilantes in the American Borderlands

Meet the extralegal actors harassing immigrants and the brave folks pushing back. 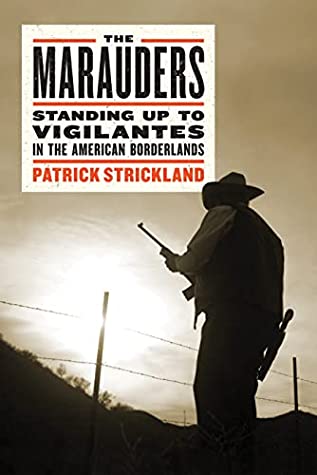 Patrick Strickland’s The Marauders is a study of the vigilantes and militias seeking to stop illegal immigrants from entering the U.S. from Mexico. Much of the story is centered in the border town of Arivaca, Arizona, population 600. Its principal watering hole is a bar named La Gitana. Scotch-taped to its door is a warning: “UNWANTED: MEMBERS OF ANY VIGILANTE BORDER MILITIA GROUP, INCLUDING, BUT NOT LIMITED TO, AZ BORDER RECON.”

The sign was posted by the bar’s owner, Megan Davern, a no-nonsense progressive who welcomes immigration — in contrast to the views of the majority of locals of Anglo-Saxon heritage. Davern’s decision to ban vigilantes from her establishment reflects the magnitude of the problem militant nativists are creating in the region.

Racist nativism has a long history in America. Strickland describes it thusly:

“In the United States, paranoia-fueled anti-immigrant violence is rooted in the country’s establishment as a predominantly white Protestant nation, a process made possible only through the genocide of Indigenous people and the mass enslavement of Africans kidnapped from their homelands and their descendants. Fears of demographic change are imbued by racism, and those fears are embedded in the country’s DNA.”

As the author points out, racial prejudice formally began in the U.S. in the 18th century. In 1790, Congress passed the first naturalization act restricting citizenship to “free white persons.” Since then, discrimination has continued, ebbing and growing from time to time.

I find antipathy to immigrants surprising since all Americans are descendants of immigrants. (The only exceptions are Native Americans and Indigenous Alaskans, who account for barely one percent of the population.) Today’s mostly white, upper-class conservatives who see themselves as “natives” often take a dim view of Asian, Hispanic, and Black citizens, whom they consider inferior. Hence the rabid hatred of non-Anglos, particularly illegal immigrants coming across our southern border.

The Marauders details this hatred made concrete via the extralegal efforts of anti-immigrant groups, many of whose ideologies dovetail with those of conspiracy-obsessed movements like QAnon. Their victims, the illegal immigrants, are often struggling to survive, fleeing extreme poverty or lethal attacks, and hoping for a better life here. But their attempts to get here are often fatal. More than 10,000 people have died crossing the border into the U.S. since 1994.

One of the nativist groups is Veterans on Patrol (VOP), whose leader is Michael Lewis Arthur Meyer. He and his followers regularly attack anyone trying to cross the border illegally and destroy water stations set up to assist them. Meyer uses Facebook videos and other social media outlets, including VOP’s Twitter account, to spread falsehoods about immigrants, accusing them of child sex-trafficking (a popular QAnon charge) and drug smuggling on behalf of Mexican cartels.

Another dedicated nativist is Tim Foley, who participated in the U.S. Capitol insurrection on Jan. 6, 2021, an attack encouraged by then President Donald Trump. Foley operates as a “civilian border militia man,” cultivates alliances with right-wing politicians and anti-immigrant groups, and vandalizes water stations set up by Humane Borders, a pro-immigrant organization. Whereas Meyer is associated with the VOP, Foley aligns with Arizona Border Recon, or AZBR, the group Megan Davern banned from her bar.

Throughout the book, Strickland spends less time profiling anti-immigrant forces than he does those, like Davern, trying to help immigrants. One such figure is FBI Special Agent Matthew DeSarno, head of the Dallas Field Office, who does all he can to aid desperate people crossing into the U.S. (DeSarno also spearheaded the arrest of 17 alleged Capitol insurrectionists.)

Another is Shura Wallin, 79, who makes water drops in the desert along the border, searches for immigrants’ remains, and travels weekly to Mexico to provide humanitarian aid. She worries that the damage caused by Trump’s border regime — and fueled by the former president’s ongoing characterization of illegal immigrants as “rapists” and “criminals” — may be “irreparable.”

Most of the stories in The Marauders are told chronologically from 2017 to 2021, illustrating that the saga is immediate and ongoing. Strickland’s writing is straightforward, skillful, and unobtrusive; his many interviews with both nativists and their adversaries speak for themselves, and what they say can be devastating. If you’re up for a shocking portrayal of U.S. nativism well told, take on The Marauders. But be prepared for some rude awakenings.

Tom Glenn writes full time and has 17 short stories and six books in print. His most recent novel, Secretocracy, tells the story of President Donald Trump’s persecution of a budgeteer who refuses to fund an illegal operation favored by the commander-in-chief.