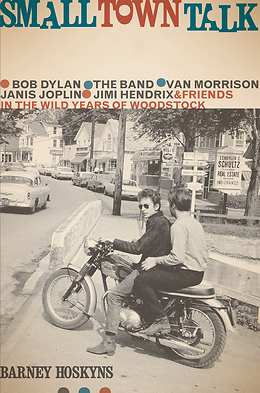 I need to put this disclaimer out there first. Barney Hoskyns’ book is not really about the Woodstock that its subtitle might be taken to suggest.

Small Town Talk actually addresses a far less Brigadoon-ish dot on the New York State map, the actual town where many of the luminaries of America’s folk-rock movement coalesced around Bob Dylan in the sixties through mid-seventies. The village of Woodstock, an arts colony dating from the turn of the 20th century, actually lies some 65 miles from the muddy cow pasture and storied cultural milestone to which it lent its name in 1969.

Why the disconnect? It seems the festival was originally slated for the village, but the town elders got cold feet about the scruffy, rebellious hordes likely to show up, among other factors, and they pulled the plug. Only in the last months before the event was scheduled did the Woodstock Music and Art Fair find its ultimate site, courtesy of an opportunistic dairy farmer who figured his 60 acres, though some distance from the village, were ideally configured for the celebration. You know the rest.

What you might not know is that Dylan never performed at the festival.

Still, he’s an important character in Hoskyns’ tale. The book devotes nearly half its 400 pages to Dylan and the goings-on in his orbit. Even so, the real center of the narrative is the portly personage of manager-promoter Albert Grossman, a transplant to Woodstock who signed Dylan in 1962. Dylan was to reside in Woodstock on and off into the mid-70s, while Grossman was to make Woodstock his home and center of operations until his death in 1986, where the book essentially leaves off.

If it was Grossman who attracted Dylan to the village, it was Dylan’s cachet, arguably, that drew other rock luminaries to the town, including Joan Baez (Dylan’s girlfriend for a time), the Band, Van Morrison, and Janis Joplin. Many of these moved in and stayed on, joining long-term resident Maria Muldaur and native Peter Yarrow (of Peter, Paul and Mary fame).

Many of them, including the aforementioned Peter, Paul, and Mary and Joplin, as well as Todd Rundgren, John Lee Hooker, Ian and Sylvia, Richie Havens, Jesse Winchester, and Gordon Lightfoot, also became Grossman clients (although not all of these were enticed into the Woodstock community).

Later, in the 1970s, when Grossman opened his Bearsville studio near the village, a slew of other rock luminaries signed on with his label. So despite Dylan’s falling out with Grossman and subsequent departure from Woodstock, this Catskills landscape impressively typifies the vibrant creative overlap among American folk, country, and rock.

Hoskyns, prolific author of two dozen books, most of them about American rock ‘n’ roll, is best known for his earlier volumes about Led Zeppelin and the music community that sprouted around Los Angeles (Hotel California). Given this pedigree, in Small Town Talk, he’s predictably at his best when he describes Woodstock’s artistic and civic culture during the Dylan years. He skillfully details the musicians’ everyday lives in the community, their sexual and drug adventurism, their marital challenges, their quirks of personality, and their café hangouts and venues for casual jam sessions.

But as well-researched as this book is, don’t expect a bonanza of juicy rock-star anecdotes, or even extended reminiscence from any of the principals. Hoskyns is an exhaustive and serious chronicler of the village’s rock and folk milieu, but the hallmark of his book’s approach is more its unremitting slipstream of detail rather than cultural or biographical context.

So Small Town Talk may be more suited to the tastes of rock historians or serious enthusiasts out to master the most granular of facts about the Woodstock-Bearsville community. The casually selective reader may find in Small Town Talk’s index and extensive bibliography the most productive tools for approaching this book’s commitment to telling it all — at least where unvarnished facts and events are concerned.

Today, Woodstock village, drained of its creative energies, still stands, an oft-mistaken destination for 21st-century pilgrims pursuing the legend of the Woodstock Music and Art Fair. Nowadays these searchers will have to be satisfied with flocks of merchants hawking the tie-dye T-shirts and ganja paraphernalia that pass for atmosphere, and will find no aging rock stars nor dewy-eyed village daughters, only a tame civic acknowledgement of the artistic heritage that Dylan and Grossman brought to pass half a century ago.