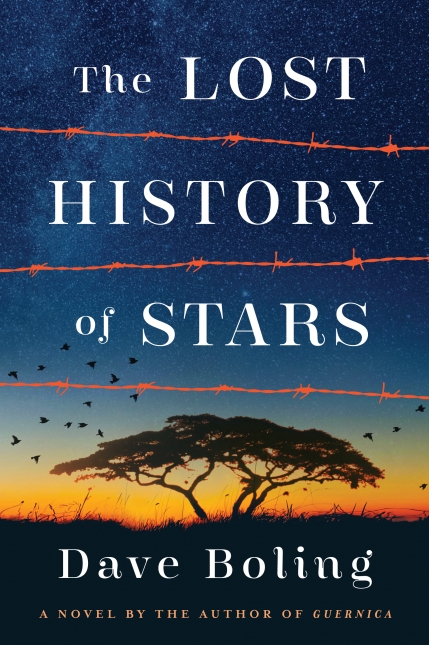 There have been thousands of novels written about war, but not so many about the Boer War in Southern Africa at the turn of the 20th century. Dave Boling has given us a compelling story in that setting, The Lost History of Stars, apparently inspired by his grandfather’s participation in that war.

The novel is narrated by Lettie Ventner, the 14-year-old daughter of a Boer farming family who manages to survive the hardships of a British internment camp over long months of winter weather, muck, disease, death, and violence. The story moves back and forth between Lettie’s peaceful family farm in 1899 and the internment camp a year or two later.

Boling has done his historical homework. The brief scenes of fighting, including the descriptions of the destruction of Boer farms and livestock by the British, ring true. To prevent the Boer women and children from feeding or otherwise helping the men who did the fighting, the British military burned their farms, destroyed their livestock, and locked the women and children in dismal and dreadfully mismanaged prison camps.

The novel’s success depends on holding our interest as Lettie copes with the ugly realities of the camp and as she deals with the process of becoming a woman in such challenging surroundings. As to the camp, Boling succeeds against the odds. He makes the quotidian events of daily life there come alive as Lettie’s family — especially her mother — determinedly, sometimes smoldering with violent anger, copes with the lack of water, infectious diseases, near starvation, mud, and candles that gutter out at night.

An especially compelling moment is the story of a single potato that Lettie is surreptitiously given by a camp guard. To maintain the fire to cook this windfall, Lettie must tear the pages from a book she deeply cherishes and burn them.

“With a spoon, Moeder [mother] rescued the potato and positioned it in the middle of a plate. She sliced it in half lengthwise, the steamy mist of scent rising from the incision. The halves fell open.

“‘Ohhh,’ Willem said. It drew Rachel to stand over us, Mevrou Huiseveldt holding vigil from her cot. Moeder then made three slices crossways through the two halves. She sprinkled most of our weekly salt ration across the pieces, the salt reflecting like tiny diamonds on the soft, golden pulp. We sat silent, pulling the smell into our lungs, my stomach begging loudly enough that all could hear.”

Such compelling, detailed scenes punctuate the struggling family’s life, with some welcome relief as we share Lettie’s memories of her grandfather and her dreams of being united with him and her father and older brother when the war is over. The camp scenes are vivid and we cheer for Lettie and her mother as they cope and struggle and survive. Many others do not.

Lettie’s coming of age is less persuasive: except for a non-flirtatious friendship with a British guard, she seems oblivious to her sexual changes. That may be only fair under the circumstances, but we rarely feel close to this feisty young woman. Her mother, too, is a powerful and central character, yet we never really get to know her.

Lettie’s dreams are of her grandfather who taught her to love the stars and an aunt who imparted life’s lessons through needlepoint. These are fine as far as they go, but they don’t go far enough. In a close-up novel like this, we seek intimacy, including, perhaps, discovering some bad things about Lettie. Heroines, like heroes, should be flawed.

A pesky cavil: Boling sometimes seems too determined to show us his familiarity with the Afrikaans language and customs. We easily get used to Moeder and Vater as Lettie’s parents, but the terms for other family members can be challenging and sometimes annoying.

Oupa, for example, is grandfather, Ouma is grandmother, and Oom is uncle. But you sometimes need a cheat-sheet to keep track of these: “Oom Sarel screamed in front of a group of men that Oupa should tell us all about the native girl that worked here after Ouma died, and something that he had seen between her and Oupa...”

Well, it gets frustrating. And so, occasionally, does the use of italicized Afrikaans words (sjambok, riempies, kopje) with insufficient context to know their meaning.

But the novel moves. Its general historical accuracy is important and well established. And Lettie Ventner stands out as someone we enjoy spending time with and whom we’d really like to know, perhaps a bit better than we do here.

The Horror Is Us