The Lost Book of the Grail: A Novel

A somewhat syrupy tale of a bibliophile's quest for the ultimate treasure. 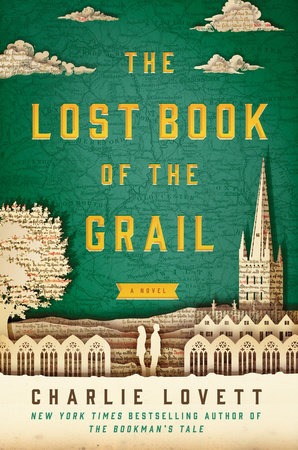 To determine your suitability for enjoying The Lost Book of the Grail by Charlie Lovett, take this simple test: First, do the words “King Arthur” and “Holy Grail” get you excited? How about “medieval Latin” and “vicar”? Are you fond of British mysteries with quaint settings and lovably gruff sleuths?

If your answers are “yes,” this novel may be your cup of Earl Grey.

Note that you’ll be spending a great deal of time in a small English city called Barchester, with a slightly twee gent named Arthur. He nurtures the contents of the Barchester Cathedral library; teaches provoking undergraduates (who call him Arthur, while he refers to them by their surnames); holds sessions of the Barchester Bibliophiles (BB) book club with two fellow book lovers; and searches for the Holy Grail.

Did I mention the spunky, beautiful, and somewhat irritating young woman who has just arrived to digitize the contents of the cathedral library? Or the fact that Arthur is a world-class luddite?

The Lost Book of the Grail has plenty of bibliophilic mystery, a good deal of capering around, and a push-me-pull-me romance, though the reader may have to suspend some disbelief. Arthur is a 40-year-old bachelor, attractive yet virginal, who has been obsessed with the King Arthur stories since his grandfather first introduced him to the legend, and doubly so since he ran to his neighborhood library to check out King Arthur’s Knights: The Tales Retold for Boys and Girls. That book introduced him to the grail, the “magical cup with healing powers,” which is said to have held the wine served at Christ’s last supper, and is sought by King Arthur’s Knights of the Round Table.

Arthur’s grandfather shares a secret with him — the grail is real and is “right here in Barchester.” Arthur is then tasked with the adventure of finding it as an adult. As a boy, all that is necessary is that he “believe in it.” Arthur has no problem stating he will “without the shadow of a doubt.” The reader, however, might not be quite as certain.

At the book’s core is this question of belief: Is it necessary to believe in order to appreciate a rich story? Despite Arthur’s daily presence at the college’s Epiphany Chapel, he is a nonbeliever — an interesting, if curious, characteristic for a grail-hunter.

Arthur notes that “any number of regular [church] attendees…if put to the test about darkening the doors of the Cathedral on a regular basis…would carefully skirt around the issue of faith.” Part of what he stands to gain in his pursuit of the grail is the acquisition of some sort of faith.

When we meet him, Arthur is grown and comfortably ensconced in a professorship at the University of Barchester, spending time with BB members Oscar and David, as well as his dear friend Gwyn Bowen, dean of the cathedral.

A true bibliophile, he is in his element when sequestered amongst the cathedral’s extensive collection of rare antiquarian books. The most troublesome part of Arthur’s existence is his writer’s block when it comes to drafting a guidebook to the cathedral, a perpetual task whose deadline he has consistently ignored.

We can sense that Arthur is perhaps a bit too comfortable. Cue the entrance of Bethany Davis, the intrepid American who has come to put the library’s contents on the Internet, and who proves particularly adept at annoying our protagonist. He feels intruded upon, threatened, and clearly smitten, all at once.

An even more pressing threat lies in Dean Gwyn’s announcement that the cathedral may have to auction its collection of books to pay for daily expenses. Arthur, heartbroken, must devise some way to justify keeping the collection together and in Barchester. Uncovering the whereabouts of the Holy Grail (hidden, he believes, in one of the library’s texts) would be the golden ticket. Luckily, he has a powerful, brilliant sleuth and ally in Bethany. The hunt is on.

Some of the most interesting sections of the novel are the flashbacks which begin every chapter. Each flashback references the mysterious “treasure” (we assume the grail) and its guardians throughout time. Each guardian is sworn to secrecy as he takes on the lifelong task of hiding the treasure until a new guardian is appointed.

The flashbacks take us across time from the Saxon saints to World War II to the present, and offer well-grounded historical details. The characters who populate these earlier storylines are generally a bit more believable than their contemporary counterparts.

There is romance, adventure, and coming of age in store for our 40-year-old protagonist as he embarks on his quest. If you still believe (just a little bit) in fairytales, this may be just what the doctor ordered. But if you prefer your drinks unsweetened, this one might be a bit treacly.

The Horseman’s Song: A Novel

The latest in the Martin Bora series weaves an intriguing mystery at the expense of accuracy.

A provocative tale of teens surviving in a world where consumerism runs amok and Big Brother is always watching.