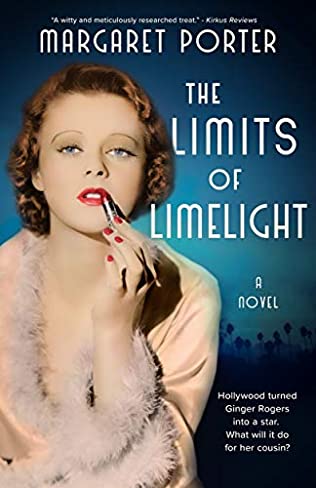 During Hollywood’s Golden Era, from the 1930s to the mid-1980s, film stars were as bright as stage footlights, with reputations that still gleam today. The Limits of Limelight dashes through those days of glitz and glamour, fabulous homes, and glorious parties heralded by literary giants of the day Harold Ross, editor of the New Yorker, renowned publisher Bennett Cerf, newspaper tycoon William Randolph Hearst, and others. “Talkies” were new, and their shining stars included Clara Bow, Billie Burke, Greta Garbo, Katharine Hepburn, and Carole Lombard.

The novel is based upon the actual life of Helen Nichols, a pretty 15-year-old from Oklahoma City who is encouraged in the 1930s by her cousin Ginger Rogers to visit Hollywood and become a starlet. Ginger’s own stardom is soaring — she’s the glamorous, red-haired dance partner of the debonaire Fred Astaire.

Helen is chaperoned by Ginger’s mother, Lela, a movie publicist and agent. Almost from the moment she arrives in Hollywood, Helen begins to transform. She renames herself Phyllis Fraser and launches into heady competition for fame.

The story tracks Phyllis’ initial visits to studio soundstages; her meetings with musicians, composers, makeup artists, writers, and producers; her tryouts for “B” movies; and her beginnings as an extra in crowd scenes or in bit parts that largely end up edited out.

Author Margaret Porter creates a believable world of travel, wardrobe, production, and romance, mentioning the shady pitfalls that trap young hopefuls — less protected than Phyllis is by her well-connected family — into lives as prostitutes, drug addicts, or worse.

Phyllis has immediate but varied success as she jumps through the hoops toward stardom. She is in constant contact with her cousin and meets the leading men of the day, among them Humphrey Bogart and the elusive Howard Hughes. The narrative trips along, its tone chatty and filled with name-dropping and gossip about actors and actresses from the days when studios “owned” stars and getting the next role at RKO Radio Pictures was of anxious importance.

Phyllis begins working for $30 a week, Ginger Rogers tap dances for FDR at the White House, and life goes merrily along despite the nation’s growing distress caused by the Great Depression. After all, young starlets are somewhat immune to financial struggle. Still, Phyllis begins to weary of the constant social whirl:

“‘A picnic tomorrow, followed by another party,’ thought Phyllis in dismay. ‘I’m so tired, I’d rather sleep the entire day.’”

As a teen in Oklahoma, Phyllis (nee Helen) had won a writing contest. Later, she picks up a literary career by penning favorable gossip about Hollywood, becomes engaged to an aspiring actor, and starts down a checkered road of romance. The storyline continues to follow Phyllis as it answers the question posed on the book’s cover: “Hollywood turned Ginger Rogers into a star. What will it do for her cousin?”

Ultimately, Phyllis Fraser’s accomplishments spread from coast to coast. In real life, as Mrs. Bennett Cerf, she mingled with both the famous in Hollywood and the elite in Manhattan. According to her 2006 obituary in the New York Times, she succeeded as “a newspaper and magazine columnist, movie actress, publisher, writer of radio operas, advertising executive and civic fund-raiser…She associated with some of the most famous people of the day, including Frank Sinatra, William Faulkner, Truman Capote, and Ted Geisel, widely known as Dr. Seuss.”

According to definition, people “in the limelight” are the center of public attention. They are interviewed, photographed, and gossiped about. The term “limelight” is derived from a lighting technique used in the early 1800s, when theater stages were lit by heating a cylinder of calcium oxide, called lime, thereby creating an intense white light. True to its title, The Limits of Limelight illuminates Hollywood’s history in glowing detail.

Janet A. Martin is a graduate of Emory University and Columbia Graduate School of Journalism and a 2015 contributing writer to the Bread Loaf Writers’ Workshop. She has published in regional and national magazines and is the author of a novel, The Christmas Swap.