This chronicle of the problematic icon is well researched, sincere...and arguably unnecessary. 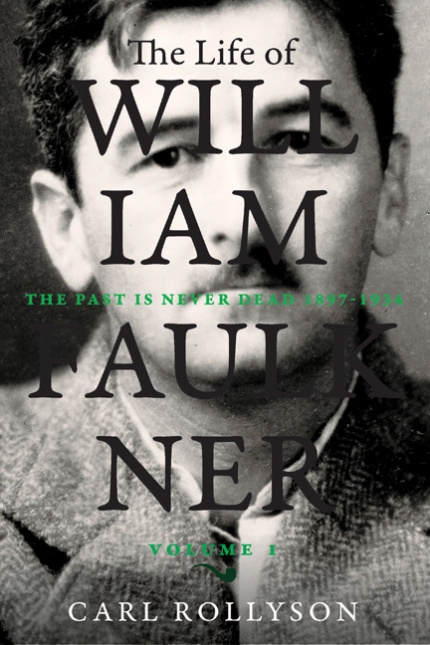 Born to Murry and Maud Falkner in New Albany, Mississippi, on September 25, 1897, William Cuthbert Falkner was a child of privilege — scion to a clan that had a fabled place within the wealthy white caste of the Deep South.

Falkner’s paternal great-grandfather, “Colonel” William C. Falkner, was an attorney, author, and slave owner who was shot in the hand during the Mexican-American War and fought for the Confederacy during the Civil War. He founded a railroad during Reconstruction and ran it capably until an associate shot him in the neck, killing him.

After the Colonel’s death, his son, J.W.T. Falkner, operated the railroad himself and flaunted the wealth it generated. He wore bespoke white suits and Panama hats; his walking stick had a gold head; his watch had a gold chain.

J.W.T. was a capable businessman and a talented storyteller, but his son, Murry Falkner, was neither. Incurious, lustful, and violent, Murry was a drinker and cigar smoker who once beat a man in public for insulting his girlfriend. In response, the man shot Murry — once with a shotgun, and once with a pistol.

Miraculously, Murry survived, married, and had four sons — the first of whom he named William Cuthbert Falkner, in honor of the “Colonel.” When that child was 5, the family decamped for Oxford, Mississippi, where J.W.T. Falkner owned a bank.

William Falkner, known in Oxford as Billy, was a beguiling amalgam of his male forebears. He played the Southern gentleman as a child, speaking slowly and sauntering while other children jabbered and raced about.

He read widely — law books, poetry — but he was an inconstant student who never finished high school. He began drinking heavily in his teens — a habit he never shook — and he put on airs. Working for money is contemptible, he proclaimed. His peers referred to him, dismissively, as “The Count.”

In 1918, Billy traveled to Canada and enlisted in the Royal Air Force. It was his ambition to become a pilot, but World War I ended before he left the ground. No matter. He bought an officer’s uniform that he hadn’t earned, bandaged his intact body, and headed south. He had added a “u” to his last name by then, so he returned home as William Faulkner, war hero. He told people that he had been injured in a plane crash, and he maintained that lie for years and years.

After the war, Faulkner enrolled at Ole Miss, where he received a “D” in English and dropped out. Friends secured him a position as the college’s postmaster, but he played cards when he should have been working and mishandled money. In his free time, he composed amateurish poetry. “West is a lake on which has been / Cast a single lily. — See!” When he was 26, he paid the Four Seas Company to print a collection of his poems entitled The Marble Faun.

Dropout, drunk, wastrel, condescending liar, vanity-press poet — the man described above does not sound like a great writer in the making, but of course, that’s precisely what William Faulkner was.

In the years following the release of The Marble Faun, Faulkner taught himself to write in a style that has many relatives but no clear parentage. He wrote rhythmic and poetic prose that was guided by a level of empathy rarely found in men of his caste, and he was unafraid to contort language in defiance of grammar until it attained the shape of his characters’ psyches. These qualities were evident even relatively early in his career, as when Dewey Dell cogitates over her mother’s death in As I Lay Dying:

By the time of his death in 1962, Faulkner had received both the Pulitzer Prize and the National Book Award twice, and had become a Nobel Laureate. In America, class will out. With the right kind of privilege, there is practically no limit to the number of second chances you can squander.

If you visit WorldCat and search for books and dissertations with the word “Faulkner” in their title, the site will return thousands of results. Some are collections of Faulkner’s stories or letters, and a few concern other Faulkners, but the majority are about William C. Faulkner, Nobel Laureate. Titles include Faulkner and Material Culture, Faulkner in the University, Faulkner and Whiteness, Gay Faulkner.

Not a few of the entries are biographies. The most recent of these, and the source of much of the information presented above, is Carl Rollyson’s The Life of William Faulkner: The Past Is Never Dead, 1897-1934, the first book of a planned two-volume biography.

Every biographer must decide how to orient their subject — within the times they lived through, the sphere of their family or profession, or in reference to a specific event or association that made their life notable. For someone like Faulkner, this decision is especially fraught because the biographer must choose how to relate their subject both to the world and to the world of books preceding their own.

For his part, Rollyson chose to immerse himself in them. His Faulkner, to a striking degree, exists within the world of Faulkner biographies. The first paragraph of his first chapter contains two sentences whose subjects are “Biographers,” a practice that persists throughout. “The customary biographical narrative,” he writes, “in an earlier stage of Faulkner biography,” “biographers suppose,” “other biographers just,” etc.

To give Rollyson his due, The Life of William Faulkner is the result of a remarkable amount of research and is clearly a work of love and respect for its subject and his writing. Its bibliography is 15 pages long, and it’s difficult to imagine that anyone interested in Faulkner could require a supplementary reference after the second volume is released.

But the question looming over this project is not whether Rollyson has done a creditable job. Given the number of extant books on the subject, the question is whether it should have been written at all. Rollyson knows this and has a response, but it’s a defensive one. “Why read another biography of William Faulkner?” He asks. “New facts, new interpretations,” he answers. Then he begins to work the referees, writing:

“[N]o one except a lazy reviewer could not see how my arrangement of events and discussion of Faulkner’s work differs from previous narratives. To do complete justice to this biography, you would need to place it page by page against the others, and who has time for that?”

Rollyson ties his book’s value to the works that preceded it, and to the existence of an academic sphere that includes a Center for Faulkner Studies, a Lecture in Faulkner Studies, and scores of scholars who have devoted their professional lives to Faulkner’s work — and within those parameters, he makes a strong case.

But it is shortsighted to presume that there will always be space in the world for one more Faulkner biography, or that this corner of academia will continue to perpetuate itself. There is a long-overdue reevaluation of the canon underway, and Faulkner’s standing is likely to suffer as a result.

Talented though he was, Faulkner’s behavior was often execrable. As mentioned, he was an opportunistic fabulist and an alcoholic. And by the standards of any age, he was a bigot. Writing to his mother from Connecticut when he was in his 20s, Faulkner said, “You cant tell me these [n---s] are as happy and contented as ours are, all this freedom does is to make them miserable because they are not white.”

Years later, the New York Herald Tribune published an article entitled “Slavery Better for the Negro, Says Faulkner.” And on another occasion, Faulkner wrote a letter to the Memphis Commercial Appeal that sought to mitigate condemnation of lynch mobs, entitling it “Mob May Be Right.”

To his credit, Rollyson diligently reports on Faulkner’s offenses, explaining his subject’s actions without excusing them. But he underestimates the effect that Faulkner’s bigotry is likely to have on contemporary readers.

Of course, Faulkner’s work will always be read and taught — there is no way to write the story of 20th-century letters without him — but it’s hard to imagine a more diverse generation of academics devoting themselves to Faulkner’s legacy by perpetuating the conferences and lectures whose participants this book is geared toward.