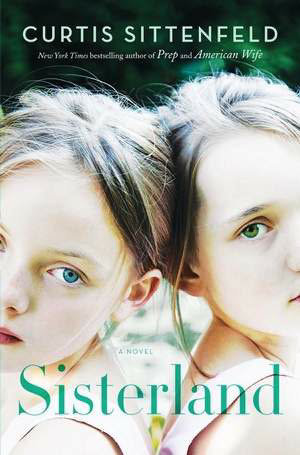 As if writing about sibling relationships weren’t challenging enough, Curtis Sittenfeld has taken on a new dynamic in her latest novel: twin sisters with ESP.

Daisy and Violet, or “Vi,” Schramm have grown up sharing the ability to sense things that are going to happen, such as an aunt having a heart attack and a house burning in their neighborhood. In an attempt to curry favor with the most popular girl in middle school, Daisy tells her about their powers; when that new friendship turns sour, Daisy and Violet are maligned at school as witches. From that moment on, each girl takes a radically different approach to her ability. Whereas Vi embraces and refines her senses, Daisy spends her life trying to ignore them and become “normal.”

Daisy feels ashamed of her family’s multiple signs of abnormality: her father’s detachment, the pall cast over the family by her mother’s depression and suspected suicide, her sister’s in-your-face lesbianism and career as a medium, and most of all, her own “senses.” Daisy changes her name to Kate in college, disavows her psychic abilities, marries and changes her last name, and becomes a mother of two — thereby, she thinks, completing her transition from freak to normal adult.

Despite her urge to separate from the past, Kate continues to live in St. Louis and see her sister and father regularly. This uneasy balance is tested when Vi goes public with a premonition that an earthquake will hit St. Louis on October 16. While many dismiss Vi as a crackpot, others brace for a disaster. Kate’s loyalties are divided — does she align herself with her rational husband and downplay the prediction, or does she support her sister’s abilities by preparing for the big quake?

I have a prediction of my own: Readers who want a strong female protagonist will find themselves frustrated with how little agency Kate demonstrates in dealing with her own life. No doubt Sittenfeld intends for the reader to empathize with her narrator as she navigates the complexities of being sister/daughter/mother/wife, but unfortunately she comes off as too sullen, fearful and neurotic to be a compelling figure.

No protagonist needs to — or even should be — perfect, but I found it difficult to relate to this gloomy main character who drops everything to serve her self-absorbed sister and distant father, but is in turn just as selfish and manipulative with her enabling husband.

Perhaps if there were more instances of affection to counter the tension between the twins, Kate’s repeated subjugation of her own needs to Vi’s would be more understandable. As it was, I found it difficult to believe that Kate, a stay-at-home mother of two, would promise $14,000 to a publicist to assist her psychic sister without discussing it with her husband first; that he would silently stand by in assent, despite knowing that they don’t have that kind of money; and that after exactly four minutes of make-up sex later that evening, neither one would find the decision one worth revisiting as a couple.

From a technical standpoint, Sittenfeld’s writing is polished and confident. She handles flashbacks well by clearly defining scenes from the past in a way that doesn’t impede the narrative. Her descriptions of characters are crisp and wry, as in this depiction of the exorbitantly priced publicist:

“Emma turned out to be stunning, with pale skin, a dark bob, and four-inch heels...She’d brought to our house a bottle of red wine and an enormous bouquet of Stargazer lilies — I couldn’t help wondering if we had paid for these as well—and there was a sort of amusement accompanying her good manners that made me suspect she found it a great lark to eat dinner at six p.m. in the suburbs. It wasn’t that I didn’t like her, but rather that I wasn’t sure I trusted this version of her — in-person high-heeled gorgeous Emma — quite as much as I trusted her voice on the phone.”

This passage made me want to spend more time with Emma than with Kate. Indeed, at the end of the evening, after Emma and all of their other guests leave, Kate thinks: “The truth was that there was a certain fizzy energy they’d taken with them, the luster of California, and in their absence, there were only our dirty dishes, our exhaustion, and the fear I felt for all of us.”

The amount of time Kate spends driving her sister around (Vi can drive, but chooses not to) and musing about the sadness of her past doesn’t give the reader any great sense that she’ll be able to move her own life forward. Her thoughts about the future consist of worries, whether  about the predicted earthquake, burying her psychic ability, being embarrassed by Vi and her girlfriend, her father’s health or her children’s safety. The one person she doesn’t worry about — and the one she could arguably hurt the most — is her own impossibly forgiving husband.

After the lengthy build-up, the aftermath of Vi’s prediction seems bit rushed. Sittenfeld moves quickly at this point into a lovely, reflective ending. The core of the novel is more than supernatural phenomena. Sittenfeld focuses on the way Kate chooses to deal with her powers and how those choices affect her relationships with those around her. Kate’s closing meditation on family, love, and legacy leaves the reader wanting to extend the moment and hear more about what she has actually learned from her decisions and mistakes.

Tara Campbell, originally from Alaska, has also lived in Oregon, Ohio, New York, Germany, and Austria and now lives and works in Washington, DC, where she is a member of the Washington Writers Group and the D.C. Interdisciplinary Writers Group. Her work has appeared in the Independent and in Potomac Review Blog, Hogglepot Journal, Lorelei Signal, Punchnel’s, GlassFire Magazine, and WiFiles.