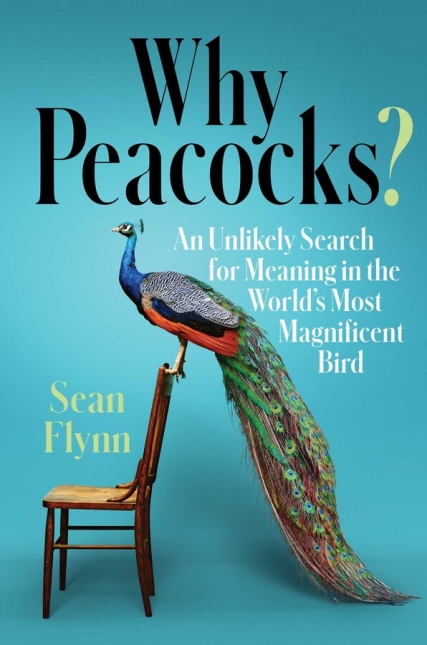 Beauty, in 1860, flummoxed Charles Darwin. His new theory of evolution was rocking the Victorian world, winning adherents through clear reason and amassed evidence. Yet critics insisted that random selection could never create the grace of a lily or the splendor of a peacock. Beauty in nature was created by God for human regard, insisted John Ruskin. “Remember,” he said, “the most beautiful things in the world are the most useless.”

Sean Flynn did not yet know that the sight of a peacock feather once made Darwin sick when a neighbor’s text rattled his family enclave in North Carolina. Flynn and his wife, both journalists, had moved impulsively from Boston to a farmhouse near Durham while expecting their first son. Their aging yellow cat was eventually joined by two Plymouth rock hens, but a professed agnosticism toward birds, snakes, and other animals forestalled packing the barn with a menagerie. So, few would have predicted an affirmative response to the neighbor’s message: “Any chance u guys want a peacock?”

A National Magazine Award-winning reporter known for gripping crime stories like Boston D.A., Flynn devotes shockingly little energy to understanding peafowl before welcoming three to his back yard. A beguiling impulsiveness, in fact, propels much of Why Peacocks?, beginning with the first expert he turns to for advice: Martha Stewart. After all, says Flynn, “She taught me how to make a Bûche de Noël.”

Though silent on the existential question of why, ever-practical Martha knows how to craft a pen of sufficient height, breadth, and strength to confine large birds with absurdly long trains. Jerry-rigged from scrap lumber and a discarded screen door, Flynn’s coop for Carl, Ethel, and Mr. Pickle sets the tone for this mostly lighthearted memoir with segues — some quirky, some profound — exploring peacocks in history, myth, art, science, and human nature.

Beauty, of course, is the reason most acquire peacocks. “I wanted one of those glistening creatures,” admits Flynn, rhapsodizing on the “sparks of green and gold, copper and turquoise…flashing and fading and flashing again” of the first one he glimpses.

Flexing his reporter muscles at last, he sets out to document variations on the theme of the birds’ allure. His rambles take the reader through Biblical passages, medieval banquets, optical physics, and the annual convention of the United Peafowl Association (membership: 223). Many he encounters have loved peacocks longer, but none articulates so well the enchantment Flynn feels for his own “elegant hallucinations.”

Sometimes, the family gets invited along. Flynn’s two boys enjoy a blessing of the animals at St. John the Divine cathedral — a peacock sanctuary for four decades. But both fail to notice light shifting through stained glass that, to their father, recalls sunlight filtering through Mr. Pickle’s “elaborate tapestry” in full display.

The boys are still less impressed on a “forced march” through the Freer Gallery of Art to see James McNeill Whistler’s famous peacock room. While Dad luxuriates in the reconstructed 20-by-30-foot, blue-and-gold masterpiece, the kids fidget. Never a proselytizer for his growing obsession, especially with his children, Flynn just chuckles when son Calvin asks, “Can we go now?”

Perhaps the boys’ affable indifference (except during one veterinary emergency) helps prepare readers for Flynn’s look at the darker side of human-peafowl relationships. This writer is at his most assured when recounting violence, whether mafia hits or peacock whackings. A woman in Hawaii grabs a feral male by the tail and batters it with a baseball bat; a neighborhood near Los Angeles loses scores of birds in a spree of poisonings, shootings, and assaults by motor vehicle.

Flynn dissects the California incidents as vengeance killings: cold, calculated attacks that may have given the perpetrator a gruesome thrill. The “why” of brutality he feels ready to answer: People see peacocks as emblems of paradise. When they turn out to be noisy, messy, ordinary creatures, “It’s the stuff of pulp fiction and tabloid crime, beauty and betrayal, and it always ends badly.”

The realities of peacocks often draw Flynn toward scientific considerations. He touches on feather anatomy, bird color vision, social behavior in captivity, and how Darwin finally worked out sexual selection to explain the utility of biological resplendence. Unfortunately, fewer than three pages are allocated to peafowl in the wild, their distribution on two continents, and their population threats.

The decline in global sand resources seems to trouble the author more than the habitat destruction imperiling Southeast Asia’s endangered Pavo muticus, the green peafowl. Deployment of eight tons of silica sand for coop improvement inspires reflections from the author on consumer guilt and personal responsibility, while the ecological impacts of feral and farmed peacocks, and humans’ culpability in global wildfowl declines, remain unquestioned.

Why Peacocks? is not a natural history discourse or paean to biodiversity in the style of Ben Goldfarb’s Eager: The Surprising, Secret Life of Beavers and Why They Matter or Katie Fallon’s Vulture: The Private Life of an Unloved Bird. Rather, Flynn gives us an intimate and humor-laced ode to a glorious being, one “wondrously improbable” enough to distract and uplift a father, husband, and reporter who has witnessed crime, war, cruelty, and disaster on six continents. Confined in a scrap-wood coop that Martha Stewart would never approve of, Flynn’s peacocks, through his well-crafted prose, set each of us free to seek out beauty and bring it closer to where we live.

By Joe Sacco and Adam Hochschild