Opening Wednesday at a Theater or Drive-In Near You: The Shadow Cinema of the American ‘70s 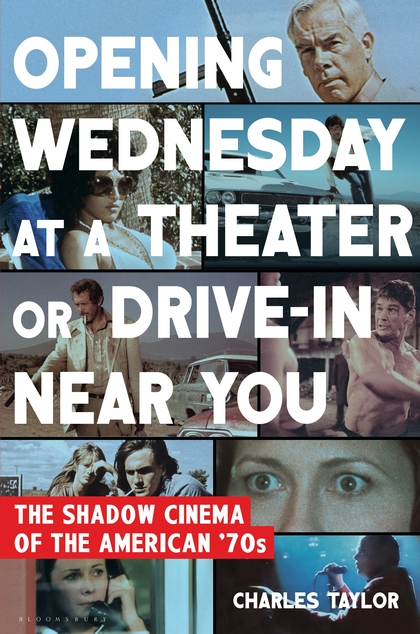 Charles Taylor joins a chorus of movie critics lamenting the infantilism of modern cinema in Opening Wednesday at a Theater or Drive-In Near You, a collection of previously published essays in defense of the B-movies of the 1970s.

They may have been cheap and cheesy, he argues, but the movies had something to say about the socio-political turbulence of the era: Vietnam, Watergate, the Silent Majority, racism, sex, drugs, and rock ‘n’ roll played starring roles.

“The new blockbusters, often taking advantage of 3-D or Imax screens, seem to shrink while we’re watching them,” he writes. “Audiences [then] could feel they were able to enter into something just as big: a vision of a troubled and tattered but still vast America.” Protagonists died; pessimism peaked. Moviemakers and moviegoers alike were grown up enough to know nobody gets out of here alive.

A social critic in the gonzo tradition, Taylor exhumes and revels in 15 of his favorites with the joy of a coonhound rolling in the remains of a pigeon. Though he’s well aware of the movies’ many missteps, he longs to win new fans for these relics, newly relevant as the nation once again splits in half and spills its guts.

Appropriately, Taylor begins with a dense analysis of “Prime Cut,” a 1972 thriller about a slaughterhouse owner (Gene Hackman) who sells prostitutes on the side.

“Cow flesh, girl flesh. It’s all the same to me,” he tells a knee-breaker (Lee Marvin) come to collect money owed the mob. Hackman is devouring a plate of innards (cow’s or girl’s we never know) when he and Marvin first meet. Marvin asks if he is indeed eating guts. Hackman replies, “I like em.”

Marvin is the epitome of a hardboiled urbanite and Hackman represents the Heartland, stronghold of the Silent Majority, according to Taylor, who describes Hackman’s character as “a Midwestern Saturn devouring his son, the emblem of a country that was devouring all its sons.”

The picture itself is “a sardonic report from the battle being waged to define what America was and who [sic] it was for. It sums up not just the American separatism that had already reared its head…but anticipates the yahoo rhetoric that was yet to come — Reagan reviving the segregationist creed of ‘states rights’; Sarah Palin talking about ‘the real America.’”

Director Michael Ritchie, who also helmed “The Candidate” in 1972, didn’t bring a heavy-handed approach to the subject, nor did he rant and rage. The author applauds Ritchie’s sly touch and craftsmanship. Today’s commercial directors, he writes, are barely craftsmen, let alone artists of the caliber of Sam Peckinpah, Jonathan Demme, or Walter Hill, whose failed films — “Bring Me the Head of Alfredo Garcia,” “Citizens Band,” and “Hard Times,” respectively — are positively reassessed here.

Jack Hill, who directed Blaxploitation star Pam Grier in “Coffy” and “Foxy Brown,” even gets a pat on the back from Taylor. The movies looked cheap and the plots were as skimpy as Grier’s get-ups, but Hill “had a sure sense of pacing and a knack for violent action scenes and because — recognizing the commanding presence of his star — he allowed the camera and audience to revel in her.”

Taylor is quite taken with Grier: “With her stately bearing and voluptuous build, regal high cheekbones, and proud, prominent nose, Grier is one of those rare performers…who seem to command the camera and the adoration of the viewer, by natural right.”

And yet she never had the career she deserved, which Taylor, who tends to be self-righteous, blames (erroneously, I believe) on the neglect of the bourgeoisie:

“While some dedicated white moviegoers or hipsters out for an evening of cinematic slumming might be among the audiences, middle-class white moviegoers who wouldn’t have though twice about going to see ‘The French Connection’…stayed away. For that matter, so did middleclass black moviegoers.”

Middleclass audiences of any era would be unlikely to embrace the violence, nudity, and profanity of “Foxy Brown,” which Grier’s movie shares with the majority of the work eulogized here. Exceptions include the screwball comedy “Citizens Band”; the has-been bio “Cisco Pike”; and the car-chase epic “The Vanishing Point.” All three could be described as red, white, and bruised. And, yes, average American moviegoers could use a dose of such realism, but it’s likely only Taylor’s fellow film nerds will respond to his call.

Mainstream moviemakers may long to experiment, but with the exception of Oscar bait, the studios will continue to shovel the bucks into adolescent drivel aimed at young males. Furthermore, those males needn’t speak English. Studios now make far more money from foreign box offices than domestic. The less said, the better.

Rita Kempley spent nearly 25 years in the dark as a film critic for the Washington Post. Thousands of screenings later, she swears she can review a movie without seeing it. She was also a regular commentator on two local FM-radio shows and hosted “Usual Suspects,” her popular weekly film chats on Washington Post Live Online. Rita was awarded an Alicia Patterson Fellowship to explore sexual myth in American cinema and is the author of the futuristic novel The Vessel, in addition to five screenplays. She lives with her husband, Ed, in Washington, DC.