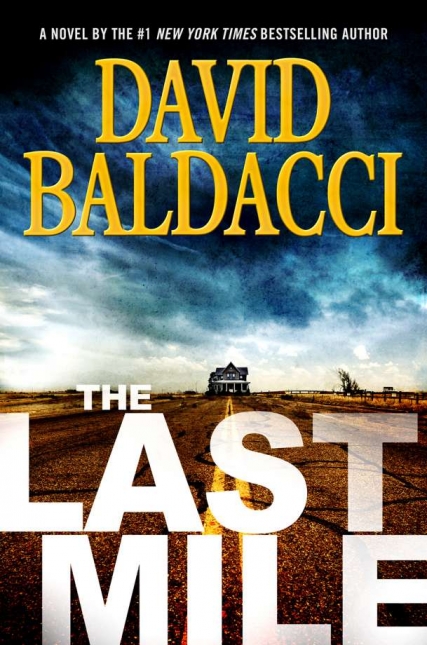 This thriller, the latest in the skein of 31 successful bestsellers from David Baldacci, features Amos Decker, an ex-cop private eye and the damaged hero of 2015’s Memory Man. Decker, like many Baldacci heroes, is stubbornly single-minded in pursuit of unveiling the truth. In The Last Mile, he’s hell-bent on helping an apparently innocent man who has been freed after two decades on death row.

Ex-college football hero (and long-ago Heisman finalist) Melvin Mars is the newly released man at the center of the action. Though back on the street, Mars is not off the hook just yet, as he’s dogged in true Baldacci style by powerful antagonists.

Texas authorities, for one, unimpressed by the revelation that has freed Mars, are tripping over their size-12 brogues in their attempts to send him back to dead-man-walking status. And there’s another murky and more immediately enemy in the hunt, too: a well-connected Deep South troika determined to silence Melvin Mars for what he may or may not know about their complicity in — wait for it — a heinous and long-buried crime from their past.

The Last Mile has all the hallmarks of your standard million-selling thriller: a landscape-shifting plot studded with reversals and surprises; 400+ pages to let the momentum build across a slew of short, nightstand-appropriate chapters (76 in all); a parade of characters who aren’t what they seem; and an underlying conspiracy that reaches — as jacket-blurb writers are fond of saying — the highest levels of our government.

Baldacci is clearly a master builder in the thriller genre, and his Amos Decker hero distinctively demonstrates the author’s knack for creating a compelling central character. As noted, Decker is a damaged hero. Like Melvin Mars, Amos Decker was a promising football player in his youth. But owing to a freak brain-jarring collision in the first and last game of his NFL career, Decker now has a photographic memory and is unable to forget anything he’s witnessed since his accident.

While this condition may seem a fortunate one for a crime-solver, for Amos it’s a curse. A year or so before this novel begins, he was first on the scene of a gruesome multiple murder, and the victims were his wife, her brother, and Decker’s young daughter. The indelible memory of this crime scene, painfully present to him every day, haunts Decker and motivates his quest to unravel the unsolved murders of Mars’ parents, of which Melvin was wrongly convicted.

The parallels between the two men — a football background and family murder — are obvious spurs as well. At the same time, the damage Decker has suffered goes a long way toward explaining his later interactions with the good folks who want to help him.

As in other Baldacci thrillers, there’s a committed group of ostensibly qualified helpers (and an enlightened Fed, to boot) backing up the hero. Baldacci’s superb five-book Camel Club series typifies this pattern, where the hero’s teammates undertake their own individual adventures that contribute to a collective solution to the puzzle. From the reader’s point of view, these uniquely distinctive supporting players add human interest and pace to the story.

In The Last Mile, however, this core group doesn’t have all that much to do with solving the puzzle. Decker, the ultimate embittered loner, pretty much hogs the action spotlight. As much as this trait serves the accuracy of Decker’s portrayal, it also works to jeopardize our continuing interest and empathy with regard to the book’s supporting characters. Here, they hover at the periphery and serve the story more as sounding boards and action prompts for its hero.

The result: much of The Last Mile is taken up with talky team meetings in motel rooms and restaurants. Remarkably often in these sequences, Decker just gets up and walks away, rarely clueing his partners in on what he plans to do with the insight he’s gained from the group sit-down. This MO fails him only once, when his lone-wolf attempt to intimidate a Mississippi sheriff backfires. But it’s a big blunder indeed, and his misstep triggers a reaction from the bad guys that drives the narrative to its final resolution.

Make no mistake: There is action in this thriller — notably a parking-lot brawl and a sequence where Decker, Mars, and an FBI ally are trapped in a burning house — but in this reader’s view, there’s not enough of the slam-bam stuff. Too often, other action elements take place off-stage and are recounted after the fact (for instance, the kidnapping of one of Decker’s investigative team).

Still, if you like the way this story is put together, it’s a good bet — given the Baldacci track record and an intriguing hint toward the end of The Last Mile — that there’s more to come in the Amos Decker saga.

Come visit Rabbit Back, a twee little town with a whimsical name and deep, dark secrets.