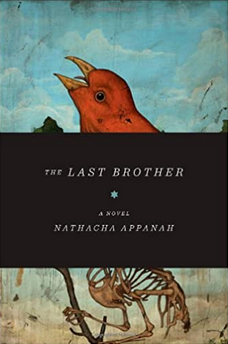 In the bleak winter of 1940-41, a small schooner carrying 1,584 Jewish men, women and children fled Nazi-occupied Austria, Czechoslovakia and Poland for Palestine, where the British authorities refused landing, detaining the boat during several weeks of storms. When the seas calmed, the British deported this desperate human cargo to Mauritius, a remote island in the Indian Ocean. There, the fugitive passengers were imprisoned as illegal immigrants for almost five years. Many perished before the survivors could finally enter Palestine.

This obscure slice of history from her native Mauritius provides the impetus for Nathacha Appanah’s The Last Brother. She weaves her novel around the relationship between Raj, a Mauritian boy whose life is riddled with tragedy, and David, a young Jew whose parents died in the ill-fated voyage.

Raj is the middle of three brothers. Weak and sickly, he must go to school because he is inadequate to work in the sugarcane fields. Vinod, his older brother, and Anil, the younger, are braver and stronger. One morning, the three boys are fetching drinking water when a sudden storm washes away Vinod and Anil, leaving Raj alone with his long-suffering mother and angry, alcoholic father.

When his father, a prison guard, beats Raj so badly that he requires hospitalization, the only care available is in the prison infirmary. There he meets David, a boy whose psychic pain mirrors his own. Before David, Raj had never heard of the war tearing apart the rest of the world. Appanah clearly intends for the island’s detachment from geopolitics to suggest Raj’s excruciating personal isolation.

Within the prison walls, the boys create a makeshift playground and find refuge from loneliness and despair. When Raj recovers and is forced to leave this temporary sanctuary, he returns to David at great peril. The rest of the story follows their heartbreaking trajectory of escape and capture, sickness and death.

Raj recounts this poignant story as an old man. His tone is one of profound regret — for his lost brothers, for his lost friend David, for the anguish of his mother, for his lost childhood.

Nature is a malignant force in the book. Extreme weather, from stultifying heat to raging typhoons, accounts for much destruction. Violent water brings death to both Raj and David’s family. Appanah uses vivid imagery to describe the verdant but dangerous landscape: “I knew when you had to swerve to avoid the big mango, slow down on the left near the almond, on account of the roots that would cunningly trip you, duck between the forked and broken branches of the eucalyptus, make a great leap, without pausing, without stopping to think, just beside the other mango, where the mangoes smelled of turpentine, because there was a hole there and beside the hole an anthill with great red ants that have shiny round bottoms, ones that give you giant blisters and excruciating bites.”

The descriptions are compelling, but Appanah can’t leave her images alone. Too often, she creates a metaphor from the lush landscape only to follow instantly with an explanation of its meaning. We may not mind that she makes clear that both boys’ names mean “king” in their native languages, but other such didactic statements compromise the reading experience. Possibly the translation diminishes the text as well, with words often repeated on the same page. A further limitation is the way Appanah foretells the outcome of events as soon as she has raised concerns, squandering the opportunity to prolong suspense.

Perhaps it is unfair to compare The Last Brother with the works of such giants as Elie Wiesel, Primo Levi and André Schwarz Bart. These writers have achingly described the agony of survival — how to find meaning in a world when they were no more deserving to live than countless others who were gassed and shot. These writers possess the rare ability to transform searing personal experience into world-class literature.

Recently, authors without firsthand knowledge of the Holocaust have also made significant literary contributions. For example, Joseph Skibell completely re-imagines the Holocaust in his inspiring debut, A Blessing on the Moon. He tells the story of Chaim Skibelski, a peasant who remains stuck on earth after he is killed in a mass shooting. Chaim wanders through time trying to reconnect with his people. He is accompanied by his rabbi, who has taken on the body of a crow. The writing is poetic, light enough to swallow as myth or allegory, while simultaneously rich enough to carry the painful weight of history.

Appanah, however, dissipates the possibilities inherent in her story through weak writing. Her continual assertions of guilt and sadness could become powerful if only she would dramatize these emotions.

Nevertheless, Appanah reveals a forgotten inhumanity in the sea of inhumanities that was the Jewish experience during World War II. The Last Brother will find a place on the shelf beside those novels that bear witness to the far-reaching destruction of the Holocaust.

Martha Toll is executive director of the Butler Family Fund, a nationwide philanthropy focused on ending homelessness and the death penalty. She writes novels and has been featured as a book commentator on NPR.

I Was the President’s Mistress!!

This antic Filipino picaresque pays off big for patient readers.