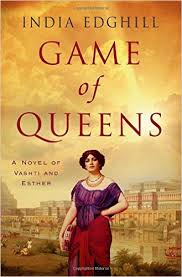 Donald Trump runs Miss Universe today, but beauty pageants are nothing new. In India Edghill’s latest novel, Game of Queens, it’s a beauty pageant that elevates Queen Esther to power. In this story, as in the biblical book of Esther, Ahasuerus is king of Babylon, and Vashti is his queen until she refuses his order to appear before him in court. After Ahasuerus deposes her, he holds a kingdom-wide beauty contest to select a new queen. Esther wins the contest and marries him.

Although Vashti appears only in one chapter of the biblical book of Esther, Edghill provides a backstory for her selection as queen and her reasons for refusing an official order. As well, the author creates a full life for Esther before her rise to power and sets the stage for Esther’s brave entreaty on behalf of the Jews of Babylon. Although Daniel (he of the lion’s den) does not appear in the biblical book of Esther, he plays a major role in this novel as a Babylonian dream-interpreter and godfather figure.

Hegai, a eunuch who controls the imperial harem, has a limited role in the biblical text, but Edghill creates an entire history for him, too: His mother had sex with an Abyssinian slave, and his father, Haman, killed his mother as punishment. He also had Hegai castrated at age 14 after allowing him to spend one night with a woman.

Both Vashti and Esther experience hardships on their respective paths to the throne. The granddaughter of King Belshazzar, Vashti is chosen as a child bride for Ahasuerus, who is only a few years older. Years later, at a drunken feast, King Ahasuerus commands Queen Vashti to display her beauty to his guests. She refuses and is set aside.

As for Esther, her mother died in childbirth. Her father, Abihail, raises horses and allows Esther to ride, to cut her hair short, and to wear boys’ clothes. When he dies, she goes to live with her cousin Mordecai, who imposes strict rules on the beautiful but precocious girl.

After Vashti’s deposition, she suffers the additional insult of being tasked with selecting a suitable replacement queen. Soon, Esther and Vashti become friends. As Esther peeps through a screen, she falls in love with King Ahasuerus and desires to become his wife.

Edghill’s imaginative tale provides an entertaining romp through select parts of the book of Esther. As a biblical reinterpretation, Game of Queens will invite comparisons with Anita Diamant’s extremely popular The Red Tent. While Diamant’s work focuses more on what is not stated in biblical texts in retelling the story of Dinah, Edghill connects the dots between selected biblical books and characters. She links the stories of Esther and Daniel and sprinkles biblical allusions like breadcrumbs throughout.

For example, Esther’s entry for the queen contest is purchased with rubies, which is an allusion to Proverbs 31:10: “Who can find a virtuous woman? for her price is far above rubies.” And Hegai, the eunuch, is described as “dark but comely” (299), which refers to Song of Songs 1:5: “I am black but comely.”

Edghill offers a romanticized reinterpretation of Esther and Vashti. Here, Esther has a consensual love affair with Ahasuerus, and Vashti has a chance at her own happiness. In fact, the author erases the violence in Esther 9. In the last chapter of the biblical book of Esther, Jews kill their enemies — anyone who sought to attack them within the king’s provinces from “India to Ethiopia” (Esther 8:9). After the first day of killing, Esther requests, and is granted, a second day of slaughter, as well as the hanging of Haman’s 10 sons. According to the biblical text, 75,000 of those who hated Jews were killed.

Unlike the biblical text itself, Game of Queens is neat and clean. Edghill’s reinterpretation is light, romantic fiction that weaves Daniel, Esther, Vashti, and other biblical characters into a tale of palace intrigue.

Nyasha Junior teaches biblical studies in the Department of Religion at Temple University in Philadelphia. She is the author of An Introduction to Womanist Biblical Interpretation (Westminster John Knox Press, 2015). Follow her on Twitter at @NyashaJunior.

Irish millennials move endlessly together and apart in this sometimes slow tale of love, class, and growing up.