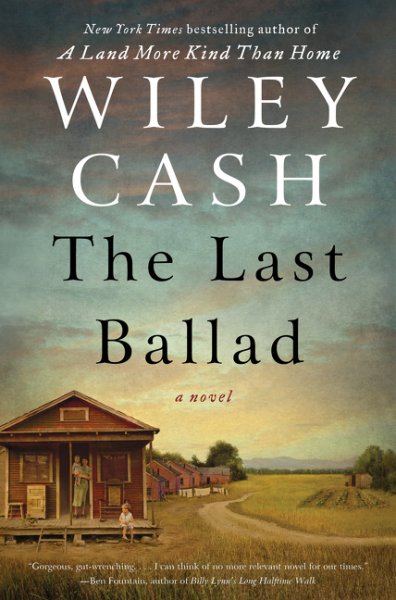 Wiley Cash sets his third novel, The Last Ballad, in and around Gastonia, North Carolina, during the textile workers’ strike of 1929, part of an attempt by the Northern, communist-led National Textile Workers Union to push into Southern mills.

Ella May Wiggins, the main character, works in a mill in Bessemer City trying to support her four starving children on nine dollars a week (for which she puts in six 10-hour shifts). Hoping a union will bring better conditions, she goes to a strike rally at the huge Loray Mill in nearby Gastonia. When union leaders hear her story, they convince her to speak. She touches the crowd with the tale of her life and a song she wrote about mothers toiling in the mills.

The union signs Ella as a paid organizer, and she soon becomes well known for her songs. Along with Sophia, a young, white communist, and Hampton, a black organizer, both from New York, she tries to mobilize the blacks who work with her. When the three bring blacks to a strike rally at the all-white Loray Mill, they narrowly escape with their lives.

The first page of the novel is a reproduction of an anti-union, anti-communist advertisement placed in the local newspaper by the Council of Concerned Citizens of Gaston County, mill owners, and their supporters. It accuses the union of telling its members to “kill anyone who stood in their way,” and claims that the “Bolshevists” want to “destroy property and kill, kill, kill.” It exhorts “every American to do his duty.”

This ad sets the atmosphere of imminent violence and fear that permeates the book. Union organizing in the South was dangerous; everyone involved was risking their lives. Police, politicians, Protestant clergy, newspapers — all supported the mill owners. Men on both sides carried guns and used them.

With Ella’s story at the core, Cash takes the reader into the lives of others who know Ella or intersect with her. He brings these characters to life, giving them their own conflicts and making them sympathetic even when they are weak (or worse). By revealing their hopes and fears, their bravery and cowardice, the author provides a fascinating slice of class and race in the early-20th-century South.

The most electrifying chapters are those devoted to Hampton, the young black man sent from New York by the union’s communist leadership to help organize black workers. Cash devotes almost as much space to him as to Ella. His sections fairly quiver with danger.

Cash’s main characters violate taboos. Ella, who is white, lives in Stumptown, a black section at the edge of Bessemer City, because she can’t afford anywhere else. She tries to organize blacks to support the union. Hampton, conspicuous to police and other hostile whites, worried about lynching or being shot, keeps on organizing with two white women.

Richard McAdam, a weak, vacillating mill owner, finds the courage to violate the rules of his class. His wife, Katherine, crosses class lines to seek out Ella.

(Cash might have dispensed with one character: Verschel Park, a man maimed in a mill accident and an itinerant drunk who recovers occasionally. Verschel’s chapters provide a window on a few events, but he is peripheral to the main story.)

Ella May Wiggins was a real person. Her story and her songs, set to popular tunes and hymns, outlived her. Richard McAdam may be based on a member of the McAden family, which owned a mill in McAdenville, North Carolina. There was a black organizer connected with the Gastonia strike who had to be sent north for his protection.

History aside, this novel stands on its own as a work of fiction. Some of the chapters on characters other than Ella might keep the reader’s attention away from the main story for too long, but Cash has made these characters interesting in their own right.

A few anachronisms and mistakes distract the reader. Cash has a character say “diversity” for integration, and another refers to the press as “the media,” words from our day. There are also some contradictions in dates.

Still, The Last Ballad, while a bit sprawling, is well worth reading. The reader will come away with memories of Cash’s characters and insight into a violent and difficult period in Southern history.

Alice V. Leaderman is a writer, gardener, and hiker who recently moved from Maryland to Connecticut.