The Judge Hunter: A Novel

What happens when Samuel Pepys' hapless brother-in-law is sent on a snipe hunt to the New World? 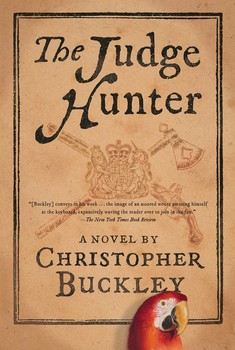 Christopher Buckley has kind of screwed himself, and that could prove to be a very good thing for readers. Buckley wrote his first historical-fiction novel, The Relic Master, in 2015, and has now followed that up with a second, the wildly satisfying and funny The Judge Hunter.

Since he set The Relic Master in the 1500s and The Judge Hunter in the 1600s, it appears that he is trending toward currency, and he admits that his goal is to set four more novels in the subsequent centuries. Oh, minor figures of modest historical significance, do beware.

The Judge Hunter opens with Samuel Pepys, arguably the most important diarist in England’s history. Pepys is annoyed with his real-life brother-in-law, Balthasar de St. Michel (Balty to his friends), and not just because of his unwieldy name.

Balty lacks motivation, financial resources, and all sense of purpose, which costs Pepys equal shares of time and money; when Balty has nothing to do during the day, he drops in to Pepys’ office to chat. And Balty is quite the chatterbox.

So Pepys, a higher-up in England’s naval office, decides that he needs to find Balty a job — preferably one that takes him far from London. As luck would have it, there is a newly formed position in the colonies that requires a man capable of annoying anyone from a ship’s captain and crew to governors of both English and Dutch persuasion.

Pepys has just the man for the job — even if it means his wife, Balty’s sister, won’t speak to him for a day or two. Balty’s wife may also be a bit put out by her husband heading off to the New World without her, and there is also the consideration that Balty is far from a seafaring soul. But these are mere trifles. All for king and country!

Buckley’s genius in building his narrative around Balty is that the history books are rather sparse on details of Balthasar de St. Michel. We know just about everything there is to know about Pepys because of the daily diary he kept for nearly a decade (it’s possible to learn what Pepys had for breakfast on just about any given day in 1665, if one is so inclined), but scant little about Balty, which makes him the perfect foil for Buckley’s wit.

After a stomach-churning Atlantic crossing, Balty arrives in the colonies assigned to find two English judges who were instrumental in bringing King Charles I to death, but who fled to North America when the monarch’s son ascended the throne.

Understandably, Charles II wants vengeance for their act of regicide, and Balty is just the man to bring them back to London — where they are likely to be beheaded and have their severed limbs displayed around town. Or so Pepys would have Balty believe (and he manages to keep a straight face all the time).

What really is afoot? England is sending warships to New Netherland to divest the Dutch and Peter Stuyvesant of their colony (soon to be New York), and they need a distraction — and an emissary of such woeful countenance that the Dutch will have no inkling that warships are on the horizon.

Despite having orders from King Charles II, it is reasonable to assume that someone as lacking in wile as Balty would meet an unkind fate soon after wobbling off the ship from Britain. His ability to annoy could make Quakers contemplate murder.

England recognizes Balty’s shortcomings, and his presence as a distraction to the Dutch needs to last more than a few hours, so they pair the bumbling Balty with Huncks, a veteran of many Indian wars and a soldier respected by all. In a bit of a stretch at literary comparison, think of Huncks as Aragorn to Balty’s aimlessly wandering Hobbit. (Well, Aragorn with a taste for drink.)

Buckley places his story in an historical context, so we have some of the early bit players in the colonies making appearances. But the author cannot help but keep close to his satirical roots, such as when Stuyvesant wonders if he can make the English pay for the wall he built to keep them out of New Netherland. (Sound familiar?)

The Judge Hunter is a satisfying romp through America in the 1600s and leaves the reader sensing the ripeness of what Buckley might be able to do with the 1700s…and perhaps hoping that Benjamin Franklin had a little-known brother-in-law.