Half American: The Epic Story of African Americans Fighting World War II at Home and Abroad

Unheralded patriots finally get their due. 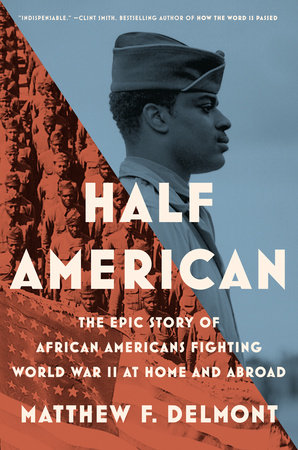 “Wars seldom end on the battlefield.”

When it comes to the conflagration that was World War II, the struggle over its memory — why it was fought, who fought it, and the lessons it taught later generations about the meaning of freedom — continues today on behalf of the Black Americans who had to “fight for the right to fight.”

In Half American, Guggenheim Fellow and Dartmouth professor of history Matthew F. Delmont provides a much-needed corrective to the glut of rosy “Greatest Generation” tomes with the first-ever comprehensive history of the Second World War as experienced by Black Americans.

Half American reveals the critical contributions of patriotic Black Americans during WWII and their efforts to fight a war on two fronts: one abroad and another back home. Indeed, it is Delmont’s task to “tell the right stories” about the war so that service and sacrifice may be honored, but also to “meet the resurgence of white supremacy as a deeply entrenched aspect of our country’s political history and cultural life, rather than a surprise or anomaly.”

Claiming the United States “did not achieve a full victory in World War II,” Delmont suggests that while the racist Nazi experiment was defeated on the battlefield, the “racial ideas of white supremacy continued to flourish in America — then and today.”

Beginning his narrative with the reactions of the Black community to Italy’s invasion of independent Ethiopia in 1935 and the Spanish Civil War of 1936-1939, Delmont highlights Black Americans’ prescience in anticipating the rise of fascist and racist ideologies internationally. Writer Langston Hughes appears early in the book, traveling to Spain to cover the fighting while interviewing members of the Abraham Lincoln Brigade, an all-Black American volunteer fighting force.

It was Black voices like Hughes’ and others’, Delmont says, that first identified the similarities between overseas fascism and the homegrown variety. (“Fascism was Jim Crow with a foreign accent.”) The Black soldiers who volunteered to fight in Spain saw it as “a proxy not only for defending Ethiopia, but also for combating racism in the United States.”

With the passing of the Selective Service Act in 1940, the door had “finally cracked open…for more Black Americans to serve in the military.” Segregation would continue in the military until 1948, but Black Americans nevertheless answered the call after Pearl Harbor to enlist or work in the defense industry. Writes Delmont, “They understood their service to be an important battleground in the fight for full equality.” He recounts the birth of the “Double V” (or Double Victory) slogan that resonated with Black Americans in its call for military victory abroad and social justice at home:

Mirroring the dual nature of the struggle are the people and events Delmont features on the domestic front. His account includes the important work of figures like Thurgood Marshall — then a young lawyer — who sought justice for the soldiers who wrote him letters detailing vile and discriminatory treatment at military bases across the country. Vivid and inspirational portraits of women like Ella Baker, who advocated for Black soldiers, veterans, and their families, and A. Philip Randolph, who taught nonviolent direct-action protests for the NAACP, reveal the WWII-era “vanguard of a civil rights revolution that would reshape America.”

As for the men in uniform, Delmont sets the record straight on the “unsung contributions of Black troops,” who not only fought bravely — such as the 92nd Infantry Division, the only Black unit to see combat in Europe — but also helped win the war’s supply battles: “Black troops were engineers, quartermasters, construction, and supply troops who together formed the backbone of the U.S. military’s logistical forces.”

Winning the war saw only half the battle completed, however. Delmont depicts in gut-wrenching detail the appalling treatment of Black soldiers returning home, a sad commentary on the hypocrisy of a nation ostensibly standing for freedom and equality:

“Black veterans were disrespected, harassed, attacked, and killed in the months and years after the war ended. Wearing a uniform, the same military attire in which they risked their lives during the war, made them a target.”

Reading Delmont’s superlative and sweeping history, it’s easy to become outraged at the past. But he draws a lesson worth remembering: The stories we tell about the past matter. Histories of WWII that exclude Black Americans and/or “minimize or denigrate the vital contributions” they made to the war effort are “drawn from the same playbook,” one that seeks to brand Black Americans as “lazy, prone to crime, and mired in a culture of poverty.” Further, it is a playbook that downplays the violence against Black veterans after the war so as to “make present-day police brutality and racial violence appear anomalous rather than systemic.”

Ultimately, through his prodigious research and chronicling of myriad Black voices, Matthew Delmont shows readers “what it means to dissent in a democracy.” Half American bestows a fresh assessment of — and appreciation for — the Black soldiers and civilians who fought extraordinarily hard so “that no one would ever again be treated as half American.”

Peggy Kurkowski is a professional copywriter for a higher-education IT nonprofit association by day and a major history nerd at night. She writes for multiple book-review publications, including Publishers Weekly, Library Journal, BookBrowse Review, Historical Novels Review, Open Letters Review, Shelf Awareness, and the Independent. She hosts her own YouTube channel, the History Shelf, where she features and reviews history books (new and old), as well as a variety of fiction. She lives in Colorado with her partner (quite possibly the funniest Irish woman alive) and three adorable, ridiculous dogs.

Waging a Good War: A Military History of the Civil Rights Movement, 1954-1968