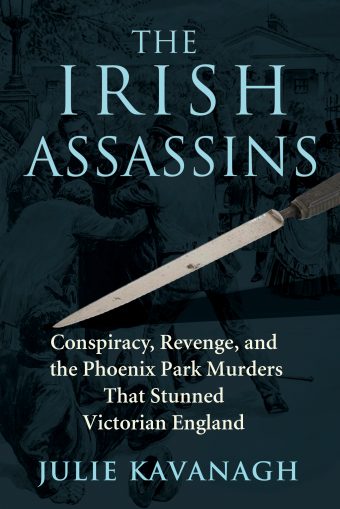 In The Irish Assassins, Julie Kavanagh tells the story of the 1881 murder of two British colonial officials in Dublin’s Phoenix Park. In her marvelously engaging retelling, this seminal moment comes to encapsulate England’s oppressive — and, for most Americans, largely unknown — relationship with Ireland for 600 years and more.

Kavanagh vividly presents the innumerable players in this saga. And she never neglects the thorny human dimension of her story: the acts of impulse, folly, and desperation, of betrayal and heroism. In a nutshell, she has built a narrative that’s faithful to the flow of events, both overt and behind-the-scenes, while never losing sight of the frailties and passionate commitments behind them.

Here’s the pivotal moment: A squad of vaingloriously self-dubbed “Invincibles” — ragtag champions of a violent path to Irish independence — set upon and kill two men, Frederick Cavendish, the British government’s newly appointed secretary for Ireland, and Thomas Burke, the undersecretary. Burke is the intended victim. Lord Cavendish, unrecognized by the attackers, is dispatched when he steps up to defend Burke.

The irony here is that Cavendish is a figure generally viewed by reasonable Irish and English advocates of independence as sympathetic to the Irish cause. What’s more, liberal British Prime Minister William Gladstone is reportedly open to a compromise solution to the Irish problem as well, but now finds himself hamstrung by the optics of the brutal attack.

Along with their self-evident political dimensions, acts like the Phoenix Park assassination stem in large part from impoverished conditions in the countryside, where native Irish — effectively sharecroppers in thrall to English and Anglo-Irish landowners — are starving and dying. Their staple potato crops are periodically failing, and their destitute households are subject to arbitrary eviction from land most of them have lived on and worked for generations.

These conditions spark the “Land Wars,” marked by widespread civil disobedience and, with increasing frequency, outbreaks of violence by Irish tenants, or at least their political cadres. In a chilling foreshadowing of the “Troubles” in Ulster a century later, the Land Wars movement and its attendant violence are largely financed by enormous donations from the Irish community in America.

Among the grace notes of The Irish Assassins are Kavanagh’s portraits of the principals in the crime and the widening circles of individuals touched by the event. They include the key Invincibles themselves, five of whom are convicted and executed, thanks to investigative work by the stalwart copper Thomas Mallon, who becomes known as the “Irish Sherlock Holmes.”

The case Mallon builds is buttressed by the insider testimony of James Carey, a turncoat and embodiment of that most hated type among the Irish: the informer. After the trial, Carey, supposedly under protection by the Crown, is unmasked and fatally shot aboard a steamer off the coast of South Africa. The shooter, an Irish American, claims it was an accident.

A number of fascinating women emerge in the aftermath of the killings. Queen Victoria, for instance, a virulent partisan for the vast empire over which she sits, glides onstage regularly to condemn the Irish independence movement and Gladstone’s liberal government. She displays an incessant fixation on the details of the investigation, trial, and execution of the perpetrators.

There are moving portrayals of other women, too, notably the murdered Cavendish’s widow, Lucy, and Prime Minister Gladstone’s wife and daughter. There’s also Katherine “Kitty” O’Shea, a would-be go-between between the Irish freedom movement — specifically its leader, Charles Stewart Parnell — and Gladstone.

Her motives, one might venture, are more than just political. She has strayed into a secret affair with Parnell, apparently at the urging of her husband, an ambitious political animal. Years later, their ongoing relationship, still covert and an authentic true-love match, becomes public. It causes a massive scandal among Parnell’s Catholic constituency and leads to his downfall. The pair ultimately marry and have children.

There’s much in The Irish Assassins to please the serious historian and lay reader alike. One quibble: This reviewer was sometimes overwhelmed by the flood of characters the author necessarily introduces. An annotated roster of the principals up front might have helped. Otherwise, this is a marvelous read.