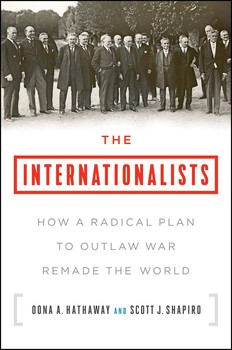 In The Internationalists, Oona A. Hathaway and Scott J. Shapiro have produced an interesting, sprawling, and detailed argument on how the Kellogg-Briand Pact, signed in Paris in 1928, shifted global attitudes from approval of the waging of "just war" to all but ruling out armed conflict and holding leaders and combatants to a higher standard than before.

The two Yale University legal scholars also correctly point to the agreement — named after Secretary of State Frank Kellogg and his French counterpart, Aristide Briand — as the means of bringing the Americans back into the international arena. The 1928 agreement, signed in the French capital on a summer day and later adopted by most nations, followed by almost a decade the U.S. Senate's rejection of the Versailles Treaty with Germany.

The authors do a superb job of illustrating how the Kellogg-Briand Pact came about. The stage-setting goes back to Hugo Grotius, whose On the Law of War and Peace in the 17th century is crucial to their argument. The additional detail about how Grotius justified the actions of a Dutch East India Company captain attacking a Portuguese treasure ship for no good reason far from either country's home waters and selling it off as a prize is necessary in developing this work.

That action foreshadowed much of what lay ahead in European and Pacific history, for Grotius believed, in essence, that, "In formal wars, Might is Right. [In] all other conflicts such as [the Dutch shipmaster's] attack on the Santa Catarina…Might is not necessarily Right."

From that point on, nations, particularly in Western and Central Europe, scrambled to justify their actions in using force to get their way. Keep that in mind when looking at the events leading up to World War II: Italy's military adventures in Africa, Japan's ruthless aggressiveness in China, and Germany's plunge into Poland.

Without the United States and a real center of gravity to secure the moral high ground, the League of Nations proved to be useless. Just war, rightful claims, etc., were the arguments hurled back at any country that opposed the aforementioned moves by Mussolini, the Tokyo imperialists, and Hitler. If verbal brickbats didn't work, simply walk out of the league. Tokyo led the way through that door.

What proved most interesting to this reviewer was how Japan came to understand Grotius, particularly in light of their view of American Navy captain Matthew Perry's threatened forcible opening of its ports to outside trade. Japanese legal scholars dispatched to Europe to learn about international law and how the Western powers operated under it after Perry came back to the islands with Grotius' original justification for grabbing the treasure ship.

In addition to that interpretation, "The concepts the [European legal] texts represented were so foreign that there were often no existing Japanese words that captured their meaning." This meant that, in Japan, the way was open to contest even the meaning of the phrase "international law" to justify any move. That debate in its ruling circles would have substantial consequences for Russia in the early 20th century and dire consequences for Korea and China for decades longer.

The impact of those Japanese views of the world when it was a rising power reverberates today in the deep suspicion that exists between Seoul and Tokyo, even though both are American allies, and in the muscle-flexing over territorial claims in the East China Sea between Beijing and Tokyo.

The narrative in The Internationalists slows in the minute detailing of just how the primacy of the new world order of negotiation over conflict took shape, but picks back up when it comes to seeing how the Allies chose to try the Nazis both for the war itself and for war crimes related to the Holocaust.

The American war secretary Henry Stimson, an experienced lawyer as well as a statesman, believed war crimes could not be prosecuted by an international tribunal. But Robert Jackson, then a sitting U.S. Supreme Court justice and chief prosecutor at Nuremberg, "managed to shoehorn the Holocaust into the upcoming trial but only by linking it to the war."

More directly to the book's key point: For those Nazi leaders it convicted, the tribunal accepted the Kellogg-Briand Pact's criminalizing of war. But more radically, it also accepted an idea that it was possible to "punish [individuals'] evil acts even if they were not crimes when committed."

The idea of ex post facto was pushed aside in the name of a "higher justice." Union leaders during the Civil War had been thinking along that line to prosecute leaders of the Confederacy even before the assassination of Abraham Lincoln, but never actually succeeded in doing so as federal courts reasserted their authority once the fighting ended.

Stepping back from the Nuremburg trials, Hathaway and Shapiro examine the question of what to do about civilians in war. The issue became increasingly complicated as the tenor and size of conflicts spread, covering grand sweeps of territory in the Napoleonic and later eras. In short, the idea of distinguishing between regular armed forces, or even combatants, and all others blurred from the early 19th century through today:

"The names given civilians who participated in hostilities changed over time from ‘robbers,’ ‘bandits,’ ‘brigands’ to ‘partisans’…‘bushwhackers,’ then to ‘guerrillas,’ ‘irregulars,’ ‘freedom fighters,’ ‘insurgents,’ [and eventually] to ‘terrorists.’"

And that's, in part, where we are now — particularly in dealing with Islamist extremism — not only in Iraq, Syria, and Afghanistan, but in our own city streets. At the same time as all nations are confronting transnational terror, we are also living in a world of China's growing ambitions to dominate the East and South China seas; Russia's blatant occupation of Crimea and backing of separatists in eastern Ukraine; the rise of an embittered populism in parts of Europe and America; and the undefined but very real threat from cyberattacks by nations, extremists, or even mischievous hackers.

The authors recognize these new challenges to a world order supposedly dedicated to the peaceful resolution of conflicts. That new order of security and stability has been largely held in place by the United States diplomatically, economically, and militarily since the end of World War II. It certainly is being stressed as this review is being written.

The authors’ conclusion to The Internationalists addresses these nascent questions. They are looking for a new equilibrium between the chaos of “might is right” and “war is illegal.” In their writing, they offer realistic grounds for optimism.

"We can update the rules to respond to global challenges — as have those who have endeavored to create more inventive and creative mechanisms for outcasting rule breakers — or we can disregard them. The choice is ours."

A soldier-diplomat bears witness to atrocities beyond imagination