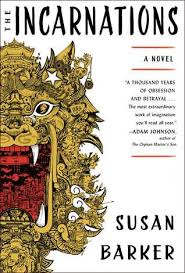 Very few nations can boast of a recorded history that goes as far back as China’s. The earliest examples of Chinese writing, the Oracle Bones, date from 1200 B.C. Approximately 1,000 years later, Qin Shi Huangdi became the first emperor of Imperial China, ushering in an era of great scientific and cultural achievements.

However, those outside the very upper tier of society were often condemned to a harsh and squalid existence. Even today, though there is a large middle class, life can be brutal and dangerous for the Chinese underclass, or anyone who dares to challenge those who wield power.

In Susan Barker’s novel, The Incarnations, Beijing taxi driver Wang Jun fits the profile of China’s new and emerging middle class. Though he is not rich and successful like his father, who was a top official in the Department of Agriculture with hair “dyed politburo black” before suffering a stroke, Wang Jun lives in cozy domesticity with his wife and young daughter.

He works hard, observing the manifestations of a fast changing China from the vantage point of his taxi: the construction for the Beijing Olympics that slows traffic to a crawl, the woman with the bandaged face who has just left the plastic surgeon’s office, the bribing of officials in the back seat of his cab.

But his life begins to unravel as he finds anonymous letters under the windshield wipers of his taxi or slipped under his apartment door from someone who purports to be his soulmate. The letters tell of their closely intertwined previous lives, starting with his incarnation as Bitter Root who, during the Tang Dynasty, rises from a hardscrabble life to become the Eunuch Loyal One, “the head of the Department of Housekeeping in the Imperial Palace, and a trusted servant and confidant of the Emperor Taizong. A very powerful castrato indeed.”

In this incarnation, his soulmate has been “made flesh” as his daughter, the issue of Bitter Root’s coupling with his “idiot” sister — thus the castration. The daughter chases her father-uncle to the capital, where she becomes a much sought after prostitute, regaling her clients with the story of her father’s humble origins. Finally, Eunuch Loyal One offers her money if she will stop broadcasting their relationship. Not taking kindly to his offer, she throws his dismembered member, which he wears in leather pouch that hangs from his belt, into a well. The eunuch dies trying to retrieve it.

And so the reader begins a heady journey through some of the lowlights of Chinese history: the Mongol invasion, the cruel reign of the sadistic Emperor Jiajing, the era of the Opium Wars when the enfeebled Qing Dynasty could not prevent the British from flooding the country with “foreign mud,” and the Cultural Revolution. In exquisitely wrought prose, the reader is regaled with atrocities, suffering, and the ease with which people maltreat their fellow humans.

Through the six lives of Wang Jun, stories saturated in mutilation, incest, cannibalism, torture, gang rape, slavery, and murder are served up like a sumptuous, full-course banquet for top party cadres. The squeamish will find it tough reading, though the glittering prose, dazzling details and breathtaking scope of the author’s vision will reward anyone who admires superb writing.

As Wang’s life is revealed to be much more complicated than at first glance, the reader becomes compelled to discover the identity of his epistolary stalker. Wang suspects the male prostitute Zeng, met during a stint in a mental institution, with whom he might have built a life if society was more tolerant of homosexuality.

The stories of his past incarnations typically involve an obsessive, same-sex relationship with his self-proclaimed soul mate, and Wang’s suspicion fits in with that pattern. But as Wang becomes more convinced that Zeng is his poison pen pal, the reader’s doubts grow.

Part historical fiction, part mystery, part portrait of China today, The Incarnations is a powerhouse of a novel.

Alice Stephens writes a regular column for the Independent, Alice in Wordland. Be a pioneer and follow her on twitter at @AliceKSStephens.