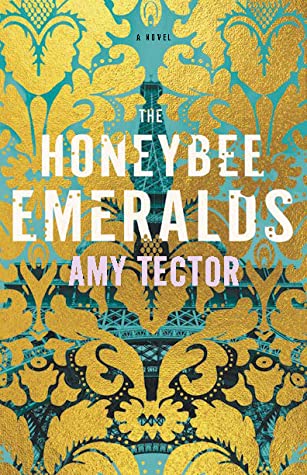 Oh, my goodness, Amy Tector’s debut novel, The Honeybee Emeralds, is so much fun. It opens in the basement of a modern-day Paris office building. The lights have just gone out, and the reader is stumbling along the pitch-black labyrinth of underground corridors alongside Alice Ahmadi, a new intern at Bonjour Paris, a long-running and now struggling magazine for expats.

She’s been tasked with getting the heat turned back on in the magazine’s offices. Power is eventually restored thanks to Alexander, an office neighbor, perfumer, and gruff giant of a man. Deep within the bowels of the building, the two discover a stunning treasure hidden inside a roomful of old costumes. Alice soon learns they have found the mysterious Honeybee Emeralds necklace:

“It was gorgeous. It had two thick strands of diamonds, but they were the supporting characters to the main event: a golden honeybee pendant with filigreed wings that held two perfectly matched green gems, each about as big and thick as a thumb.”

Although turning it over to the police would be the logical next step, Alice and Alexander instead, upon learning a bit of its backstory, realize the bauble may be the key to saving Bonjour Paris. Among others, joining them on the ensuing adventure are Lily, the magazine’s American editor; Daphne, Lily’s friend and an art expert; and office manager Mme. Élise Boucher, who “had been around almost as long as the magazine itself.”

In their own ways, the main characters are all outsiders looking to rescue a publication marketed to outsiders. Together, Alice, Lily, and Daphne (who form a so-called “Fellowship of the Necklace”) have just one month to solve the riddle of how the Honeybee Emeralds — a priceless bauble linked to both Napoleon and Josephine Baker — ended up in their basement.

Tector juggles her multiple narrators with skill. Each of the women has a unique obsession with uncovering the history of the necklace; they descend down separate rabbit holes in search of the truth, unearthing fascinating historical tidbits along the way. The most compelling of the three is young Alice, whose inward-looking journey, sparked by the Honeybee Emeralds, compels her to examine her own identity and definition of “home.”

As a girl, she and her mother fled Iran and sought asylum in the U.K. Now, she finds herself in France working for a magazine for expats. Her status as an outsider seeking a sense of belonging mirrors the search for the necklace’s origins. This may explain her immediate, intense connection to it:

“[Alice] dangled it by the diamond chain, letting the gorgeous pendant glint and sparkle in the basement’s dim light. In a flash, she understood why she had wound up in the basement…why she had stumbled upon the wardrobe room and pulled on the jacket. She was meant to find this necklace. This treasure. It was her destiny.”

In the ensuing weeks, Alice sneaks away from work multiple times to visit the safe-deposit box where it is being kept. Simply feeling the necklace’s weight in her hands confirms its existence and validates the growing bond she feels among her fellow truth-seekers. Maybe she truly belongs somewhere after all.

Although the novel’s pacing sags around the midpoint, it picks up again as the pieces of the puzzle fall into place. The necklace, whose discovery initially serves as a catalyst for rescuing a dying magazine, sparks compelling personal quests for everyone involved in untangling its past. Fans of books like The Lost Apothecary will be drawn to The Honeybee Emeralds’ strong history-nerd element. It’s a solid debut, and I look forward to what author Amy Tector has up her sleeve next.

Sarahlyn Bruck is a community college writing professor and the award-winning author of two contemporary novels, Designer You and Daytime Drama. She lives in Philadelphia with her husband, daughter, and cockapoo.