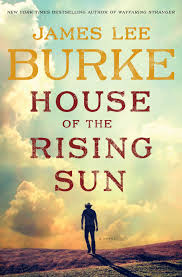 What are we to make of James Lee Burke and his 36th novel, House of the Rising Sun?

Burke has sold scads of the first 35 novels, deploying his signature mix of two-fisted prose, grim-and-gruesome action, and heroes with deep self-knowledge but a puzzling inability to control their Fatal Flaws. I’ve enjoyed at least a half-dozen of them, admiring Burke’s fierce joy in the act of writing.

Yet he continues to have a gigantic chip on his shoulder. Look no further than the “About the Author” page of this most recent book, which ends on the truculent note that one of his novels was rejected 111 times over a nine-year period but was then nominated for the Pulitzer Prize 30 years ago. The man, we are on notice, has some serious attitude; he does not forget, exactly like his heroes.

That attitude means he’s gonna take chances. When he does, sometimes he writes like an angel, especially about the land. Try this depiction of Mexico in his new book: “This was a feral land, its energies as raw and ravenous as a giant predator that ingested the naïve and incautious, a place closer to hell than heaven.”

But with Burke, you have to buy the whole package. If he’s come up with three metaphors to describe a situation, you’re going to sit down, shut up, and read all three. They’re his goddamned metaphors, and if you don’t want to read them, you can put the book down and go on with your meaningless existence; he doesn’t much care. So you don’t like dead bodies delivered every few pages, often in pieces or covered in feces? Take your candy-ass self to someone else’s book. Not Burke’s problem.

Like I said, I’ve bought the whole package from Burke several times. But House of the Rising Sun is not his best outing, not by a long shot.

The setting has promise. The story runs between 1891 and 1919, spanning the closing of the American frontier, the Mexican Revolution, and World War I. It’s a period where change pulsed through America, change that challenged Americans to adapt to new ways.

Hackberry Holland, our hero, ain’t about to go and do any of that there adapting. He’s a dinosaur from the Old West who believes in killing folks when he’s got a hankering to, and drinking himself stupid when he gets that hankering.

Stupid is actually the heart of the problem. Hackberry is irredeemably stupid, even though Burke gives him the vocabulary of an Oxford don and the habit of reading encyclopedias. All that vocabulary and encyclopedia-reading don’t help. The man is still pig stupid. Most of the other characters tell him he’s stupid, but Hackberry brushes them off. (Remember: He’s stupid.)

Then he goes on to commit fresh acts of stupidity which usually end up killing a few more people and/or pushing away someone (son or lover) he ostensibly loves. He never learns. It’s neither charming nor a good way to move the plot.

Right, the plot. It’s a mash-up of Zane Grey and The Da Vinci Code. I don’t think I’m the last reader who will do a psychic double-take when old Hackberry, in the deserts of northern Mexico, falls into possession of the Holy Grail. I could not make that up. Nor when he encounters an adversary — of Teutonic origin, no less — who is so evil that he makes Bond villains look like residents of Mr. Rogers’ Neighborhood. Hackberry even speculates dimly (dimly being the only way his mind works) that perhaps this Germanic monster is The Evil One himself.

Don’t get me started on the Haitian sidekick with voodoo in his soul. Or Butch Cassidy. (What’s he doing here?) Then there’s the baffling moment near the end of the story when Hackberry is rushing off to save his son and lover but suddenly gets a notion to try driving that there motorcar he’s riding in.

See, Hackberry’s never driven one before, since he doesn’t adapt to modernity (see above). So, rather than continue on to rescue loved ones in peril, he sets himself behind the wheel and enjoys the sort of madcap yet unfunny rampage through back yards, residential fences, and clotheslines that Mack Sennett put in silent movies a century ago.

Burke is a terrific writer. Read one of his other books.

David O. Stewart this year published The Wilson Deception, a historical mystery, and Madison’s Gift: Five Partnerships That Built America, a work of history. He is president of the Washington Independent Review of Books.