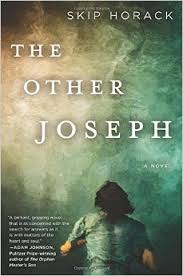 It’s hard to imagine two more disparate plot lines than those found in Skip Horack’s two novels. In The Eden Hunter, a pygmy tribesman — and loving husband and father — is captured and sold as a slave in early 19th-century Alabama. In his latest novel, The Other Joseph, a white man in present-day Louisiana works on an offshore oil rig and leads a solitary existence.

Thus, it’s revelatory to understand how similar they are: two stories of genuinely decent men who’ve had their families taken from them through violence and whose journeys — literal journeys in both cases — take them toward some level of peace and possible redemption.

The conceit of The Other Joseph is that its foreword is written by one Joseph, Thomas Muir Joseph, a Navy SEAL who was lost at sea during the first Gulf War, picked up by unfriendly forces, and held anonymously captive for 20 years before being liberated during the Arab Spring uprisings.

Tommy’s foreword introduces a narrative left behind by his younger brother Roy — the other Joseph — when Roy dove from an oil rig off the coast of Nigeria three years before Tommy was freed. So we know before we ever meet Roy that we’re going to lose him. That knowledge does nothing to prevent our emotional involvement in his story.

Roy opens his narrative by describing the day on the Gulf drilling rig that he lost his pinkie finger in an unguarded moment. The distraction partly arises from the fact that he received an email a few days before from someone claiming to be Tommy’s daughter. The rest stems from the sight of two lovely coeds who are pointedly sunning themselves on the bow of a sport fisherman below him; he considers that he used to be someone those girls might have hung out with.

How he goes from dean’s list LSU college student to roughneck oil worker living with his dog Sam in an Airstream trailer is what we learn in the first part of the story. The short answer is that an icy patch on a river bridge claims both his parents when Roy is still a freshman, and — lost and utterly alone in the world, attempting to pick up the pieces — the still-innocent 19-year-old engages in a series of reckless trysts with a 16-year-old neighbor.

The fact of her aborted pregnancy becomes known in the small community, and her shamed parents demand that Roy be prosecuted. The indelible stamp on his driver’s license, the requirement to register his whereabouts with the authorities and inform on himself to his neighbors all ensure Roy’s isolation, even though we understand that this is not the man for whom those laws were written. The scarlet letter is to be expunged after ten clean-living years, a scant three months away when Roy’s dismembered finger drops through the platform grate into the Gulf of Mexico.

The injury buys him time to do some sleuthing into the startling contact from a would-be lone blood relation, a sixteen-year-old girl named Joni, who contacts him without her mother Nancy’s permission. After a phone call from Nancy confirming that this isn’t a scam, but also that no one is inviting him to become Uncle Roy, he decides to pack himself and Sam into the old LeBaron and head cross country to San Francisco to track down his niece.

In Roy, Horack has given us a compelling and observant storyteller. The author effectively juxtaposes Roy’s current life as a roughneck at the margins of society with his middle-class, well-educated upbringing by two teachers, allowing us to believe this gritty man can express himself with such clarity and feeling. Somewhere on his trip, he pulls into a rest stop, “brick restrooms and some picnic tables, and I couldn’t shake the feeling terrible crimes had happened there…It was as if, with no obvious place to visit evil on each other, man had to go blueprint one.”

He decides to stop in and visit the Marine who had spoken to him earnestly but cryptically at Tommy’s memorial service years before. Roy has tracked him down to a place called Battle Mountain, Nevada. (Fans of the Washington Post’s Gene Weingarten will already be familiar with the town that he described in 2001 as the “Armpit of America.”)

Roy observes, “On the slope of a faraway hill some irony-deficient crew of civic-proud dolts had spelled BM in enormous block letters fashioned from whitewashed rock. The work that must have gone into that. These are my people, I was thinking. I didn’t know what battle was ever fought atop that brown hill, but if this town held the victors I never wanted to see the place the defeated were sent to live.”

Though the story remains quiet, the possibilities for disaster lurk everywhere: in his side-trip with Marine-turned-hunting-guide Lionel, in his dealings with a Russian marriage broker, and — most dread-inducing of all — in his eventual tailing of Joni through the mean streets of San Francisco.

Every so often, we remind ourselves that we’re pre-ordained to lose Roy, even as we know we get his beloved Tommy back in the bargain, and that it will be Tommy’s voice we’re left with. Finally, the heartbreak is that we understand what Roy’s life might have been like if only he’d known that Tommy was still out there, somewhere in the world. It would have made all the difference.

Jennifer Bort Yacovissi’s debut novel, Up the Hill to Home, tells the story of four generations of a family in Washington, DC, between the Civil War and the Great Depression.