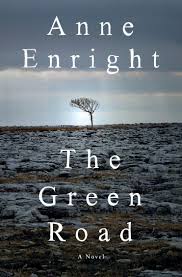 Anne Enright is a master writer (she won the Man Booker Prize for her 2007 The Gathering, in case you want proof) and, in The Green Road, she continues to astonish with her elegant prose and finely wrought characters. This novel, her sixth, focuses on the Madigans: its powerful matriarch and her four adult children.

As Tolstoy famously put it, "All happy families are alike; each unhappy family is unhappy in its own way." Given the spate of recent books dealing with the topic — Jane Smiley's Early Warning, Anne Tyler's A Spool of Blue Thread, and Ann Packer's The Children's Crusade — it would seem the unhappy family remains a fascinating specimen to put under a literary microscope.

For the Madigan family, it’s all Mammy’s fault, which is as good a place as any to start this review. Rosaleen Madigan pulls her children to her even as she pushes them away; she demands their attention only to complain bitterly upon receiving it.

When Hannah, the youngest, walks through the door on Christmas Eve, mother and daughter move to kiss. But "their faces clashed at the bone” — a perfect metaphor for Rosaleen’s relationships with her children.

Eldest daughter Constance reflects on her mother thus: “This maddening woman, she spent her entire life requiring things of other people, she lived in a state of hope and regret, and she would not, could not, deal with the thing that was in front of her.” The two sons, Dan and Emmet, find her equally toxic.

But Rosaleen, devastatingly potent, was and is the center around which the family orbits; even now, even with her sons and daughters as grown adults, living in other cities and on other continents, Rosaleen haunts her children, their thoughts and relationships, until each finds their own lives have turned pinched and selfish. And yet, despite their difficulties, we’re drawn to each of the children — such is Enright’s skill as an author.

Dan Madigan, the eldest, lives as a gay man in New York, where Enright covers in grisly detail the first destructive years of AIDS. In one particularly descriptive scene, his lover watches from the shore on Fire Island as Dan swims in the ocean, floating farther and farther out to sea, the waves bringing him in closer to shore, then sweeping him back out — a portent of the future arc of Dan’s life.

Emmet lands in Africa as an aid worker, caring for the sick and dying. He’s determined to save a continent too big to be saved — his efforts amounting to little more than Band-Aids plastered over gaping wounds. He is angry, disillusioned, and distant.

Constance, who lives close to home, is the family Sherpa, caring for Rosaleen and doing the heavy lifting for all the rest. Hannah, also in Ireland, finds herself overwhelmed by a new infant and an addiction to alcohol. All this might sound grim, but Enright’s characters are so gorgeously drawn that we’re captivated and so keep turning the pages.

The book’s structure is a series of short chapters, each devoted to one of the four children — in different years and different parts of the world — over a span of some 25 years. The final section deals with a coming together for what will be their final Christmas in the family home.

It is on Christmas Day that the unexpected happens out on the Green Road, a beautiful stretch of country lane that reaches toward the sea. There everything seems to change. Past and present merge; souls, released from the cramped quarters of the self, reach up toward the stars. It is a moment of glorious, yet intimate, transcendence for the Madigan family.

Enright has written an extraordinary novel, one not to be missed. The transformative power of art — poetry, theater, and painting — serves as a motif throughout the book. As one character observes, it’s like a drop of water on a parched tongue. Certainly one can view Enright’s novel as that welcome drink.

Molly Lundquist owns and operates LitLovers, a website providing resources to book clubs and solo readers. Prior to founding LitLovers, she worked for 15 years as a public-relations speech writer. She later earned an M.A. in English and worked for several years as a college English instructor.

The Fell: A Novel