The Great Debate: Edmund Burke, Thomas Paine, and the Birth of Right and Left

A look at two influential figures whose conflict of ideas echoes the deep political divide of today. 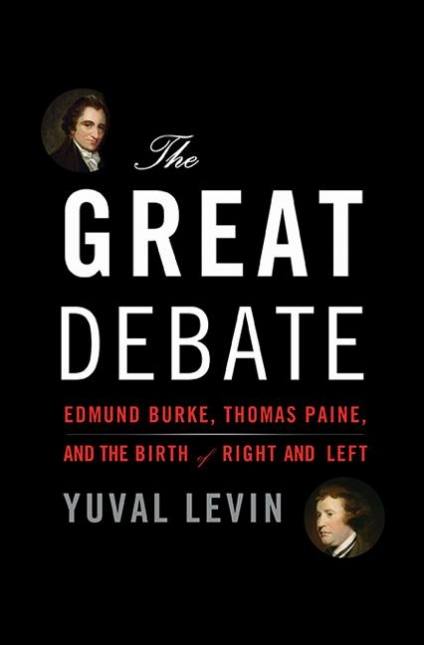 Present-day American politics began in the 18th-century debate between Thomas Paine and Edmund Burke, according to Yuval Levin, author of The Great Debate. These two activist-writers engaged in a conflict of ideas, which, Levin says, “clearly prefigured elements of the left-right divide of our own time.”

Enlightenment ideas about freedom and equality influenced both Burke and Paine, but the two men responded differently as they saw those ideas at work in the American and French revolutions. Thomas Paine applauded the new age of revolutions; Edmund Burke sought to balance revolutionary change with the stability he thought necessary for human welfare.

Burke and Paine answered each other’s arguments in their writings, which attracted many readers in England and in America. Yuval Levin judges that “each contended with essentially the same set of questions as the other, arriving at starkly different conclusions.”

Levin, a young conservative who founded and edits the quarterly National Affairs, describes the lives of Paine and Burke in his book’s first chapter. Then he switches from writing history to writing political theory. Looking “beyond the mad rush of events,” he says, lets us “consider how ideas move into politics.” His descriptions of the two men’s ideas comprise the bulk of The Great Debate, in chapters titled “Nature and History,” “Justice and Order,” “Choice and Obligation,” “Reason and Prescription,” “Revolution and Reform,” “Generations and the Living.”

In these six chapters, Levin shows the contrasts between the views of Burke and Paine. Paine regarded reason as a great liberating force in politics, enabling citizens to understand the proper principles of good government: human equality and individuality. Levin notes that Burke, by contrast, believed that “many of the greatest challenges a statesman must confront arise from the less rational elements of the human character.” For Thomas Paine, politics was an exercise in human choice. Edmund Burke emphasized not choice but the obligations that come with the complex web of relationships — nation, community, family — into which we are born.

Levin’s description of the two men’s ideas helps the reader understand their responses to the great 18th-century revolutions. Thomas Paine’s 1776 pamphlet “Common Sense” roused the spirit of American colonists in their fight against the British. An Englishman recently come to the colonies, Paine hated monarchy and urged the colonists to create a republic. Edmund Burke, a member of the British Parliament with no enthusiasm for revolutionary change, nonetheless supported the American colonists because of British misrule. He thought the British colonial policies of taxation and limits on commerce violated Britain’s own traditions of just and fair government

About the French revolution, the two men differed greatly. Paine welcomed it, once again hoping to see a government elected by the people. Edmund Burke despised the revolutionary chaos because, he said, it destroyed attachments and institutions that had bound the French people together.

Levin doesn’t avoid the two thinkers’ weaknesses. He warns that Paine’s The Age of Reason, which criticized Christianity as repugnant to reason, “is in some respects an astonishingly intemperate book.” He quotes the famously flowery passage about Marie Antoinette in Burke’s Reflections on the Revolution in France, noting that even one of Burke’s friends criticized it as “pure foppery.”

In The Great Debate, Levin elegantly lays out for the reader the ideas of Edmund Burke and Thomas Paine, but the author does not show the connection of those ideas to our present politics. Yes, the politics of right and left began with the great debate; yes, we still have a politics of right and left. Levin, however, claims more than that. In the book’s last chapter he writes, “When it is most itself, each of our parties rather plainly fits the profile that emerges from our study of the great debate of the age of revolutions.”

Plainly fits the profile? That fit doesn’t become plain to the reader. Levin leaves the great debate’s connection with today’s politics to his last chapter, in which he offers only four pages of generalizations about today’s left and right. He writes that although there have been changes in both right and left since the days of Paine and Burke, “this book can, of course, barely scratch the surface of that complex evolution.” Is it possible, contrary to Levin’s assertion, that the differences between the great debate and today’s politics outweigh the similarities? Democrats who praise Egyptian militarists for their “path to democracy” might send Thomas Paine screaming through the streets. Republicans inviting the instability of a government shutdown might similarly agitate Edmund Burke.

Ann White is the retired chairwoman of the history department of Edmund Burke School in Washington, D.C. She holds a Ph.D. in Far Eastern history from the University of Pennsylvania.

Raven Rock: The Story of the U.S. Government’s Secret Plan to Save Itself — While the Rest of Us Die