The Gracekeepers: A Novel

This debut creates a dazzling (if damp) future with ethereal inhabitants. 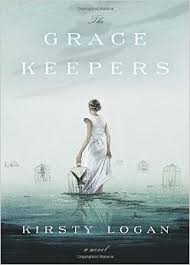 Kirsty Logan’s debut novel, The Gracekeepers, is an atmospheric, lyrical work set in a waterlogged future. In this vividly depicted world, the seas have risen and land is scarce. Humanity has separated into two bands: landlockers, who have retained a foothold on the precious remaining islands, and damplings, who live on boats and rarely step onto a dock. Tensions between the two camps are high, as they fight over the scraps left behind on a dramatically altered Earth. Logan introduces the biases and mistrust early on through the voice of a young dampling woman named North, one of her two main characters: “North never felt comfortable with her feet touching land. She didn’t trust its steadiness, its refusal to move or change in the honest way of the sea.”

North lives on a floating circus called Excalibur that plies the wide, lonely seas. The circus members live, eat, and quarrel in a line of chained-together coracles that serve as living quarters, mess hall, and even stables for two horses and a cave for a bear. North has grown up with this circus, performing with a dancing bear alongside a ragtag crew of trapeze artists, clowns, and fire-eaters. When landlockers grudgingly let them dock, they fashion the masts and striped mainsail into their big top, and the performers set aside constant hunger to put on a show for their suppers.

North is a lonely orphan, trapped in an arranged engagement to the ringmaster’s son, and hiding an explosive secret: she’s carrying a baby that is not her fiancé’s. It’s an open secret, shared in whispers among the crew, but unknown to the leadership — until the ringmaster’s greedy, manipulative wife finds out. With no money or options, North stands to lose the only life she’s ever known and the only friend she has: her bear, who belongs not to her, but to the circus. The bear is the only creature with which she feels a bond, until…

North meets the equally pensive and emotionally marooned Callanish in the aftermath of a massive storm at sea. Because of a mistake she made long ago, Callanish has exiled herself to a tiny house on an island in the doldrums, an isolated swath of ocean where storms alternate with glassy, dead calm. Haunted by her past, she longs for her mother’s forgiveness; but she has taken on the role of gracekeeper, the lone inhabitant of her island, performing religious funeral rites for damplings.

In a brief but charged encounter, she and North reveal their secrets to each other: North shares the background of her pregnancy, and Callanish reveals the truth behind her constantly covered hands and feet. The connection Callanish feels with North compels her to break her self-imposed exile to reunite with her mother and find her way back to her bear-girl.

With sumptuous descriptions and complex cultures, Logan has created a rich, fully formed world for North and Callanish. The reader catches glimpses of mysterious rites and customs on the various boats and islands that populate the new Earth. Eyes are not just wide with surprise, they are “moon-round” or “wide as eggs.”

The ringmaster admires his wife’s “black hair spread in a curve across the pillow, smooth as a fish hook,” yet the crew snipes that she’s “just a parcel of devils wrapped in skin.” Logan describes the food, smells, sights, and sounds of this world in unforgettable ways: “The sun dipped into the sea, throwing blood and honey across the sky.” It takes a talented author to describe sunsets and sunrises in as many vivid and inventive ways as Logan does.

The Gracekeepers is at its core a love story, reminiscent of Alice Hoffman’s The Museum of Extraordinary Things and Sara Gruen’s Water for Elephants. All three authors share a fascination with the spangled exoticism of the circus/sideshow life. All three novels delve into the darkness and deprivation beneath the glitz and sensuality of performance; all three cast an isolated, vulnerable heroine under the thumb of an all-powerful ringmaster/impresario; and all three feature an outsider figure who pursues the damsel in distress to (and, given the genre, this can’t be considered a spoiler) save the day. But Logan brings a new twist to the chiaroscuro, glam-and-tatter circus trope with a same-sex romance and a striking oceanic setting.

All of this said, however, one thing puzzled me about this novel: as I read, I felt myself wanting to be more emotionally drawn into the story. Despite the characters’ poignant backstories and evocative surroundings, I felt more like I was admiring the novel from a distance than getting wrapped up in it.

Perhaps the book’s muted, watery setting contributed to my muted reaction to the characters, who read more like exquisitely crafted figures than relatable people. They were perhaps a little too perfect, gracefully withstanding their harsh lots in life without the personal foibles that make characters more accessible. Gruen’s Water for Elephants is admittedly more traditional and sentimental, but because of that, it is also more immediately engaging. Logan’s Gracekeepers is rich and inventive, but there is a sense of distance from her nobly embattled characters that could keep readers from completely diving in.