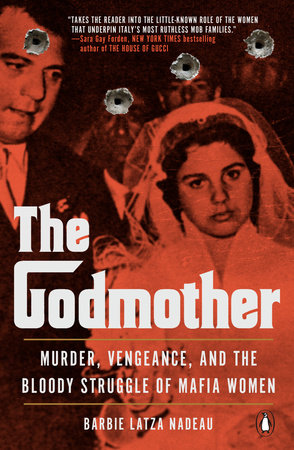 If you’ve ever had reason to doubt whether women have what it takes to assume leadership roles in organized crime, Barbie Latza Nadeau’s The Godmother will disabuse you of any prejudice. Whereas the Italian-American Mafia has shown no gender flexibility in its hierarchy, the famously sexist tough guys of Italy are paradoxically more progressive.

Women, it turns out, have come to wield great power in the criminal gangs of Italy, primarily the Neapolitan Camorra and Calabrian ‘Ndrangheta, but less so in the Sicilian Cosa Nostra, from which the American Mafia takes its nom de guerre. To be sure, much of these “godmothers’” powers derive from their proximity to men, but they are far more than messengers.

She was pregnant at the time and delivered and raised her young son, Pasquale, in prison. After her release, she hooked up with another Camorrista. Young Pasquale didn’t approve of Pupetta’s new relationship and was murdered almost surely at the hands of her new man — with whom she stayed for some time.

This is the kind of inverted morality in which these godmothers live — wrong is not only right, but the obvious choice. In fact, the only wrong in this culture is snitching.

In a second-season episode of “The Sopranos,” boss Tony visits Naples and faces down Annalisa, the imperious and alluring wife of an imprisoned Camorra leader. Tony balks at dealing with her until he learns she is, in fact, the shot-caller. Like Pupetta, Annalisa initiates deals without male oversight and commands men in violence. Just like Tony’s mother would surely do in a different culture.

Nadeau makes clear with extensive documentation that female clan bosses are no less brutal than their masculine counterparts. When asked about the deployment of rape as a punishment, Pupetta said — without irony — that it’s only used when it’s “deserved.” Indeed, one line of thinking is that women make better enforcers than men because they are more aware of how best to destroy a family. Some of the punitive actions taken are too disturbing to recount here and make the American Mafia look like guidance counselors.

The advancement of women gangsters, however, is not derived from a #MeToo-style reckoning on sexism but because of sexism. Mafiosi viewed women as weak, inept at business, and overly emotional, so they initially delegated token responsibility to them in the mistaken belief that the authorities and their enemies would underestimate and overlook them. It turned out that these godmothers were terrifyingly competent and none too eager to liberalize their rule or give power back to the men who gave it to them.

In their zealotry, mob scholars are often narrowly focused and give short shrift to the power of racketeers who aren’t male, Italian, or “made.” I’ve found that some of the most interesting and successful mobsters are those who cleverly found ways to manipulate the usual suspects. Would you rather be the headline-grabbing John Gotti, the boss of a mafia family, who lives scam-to-scam and dies in prison, leaving his family with scraps? Or would you prefer to be, say, Moe Dalitz, who is hardly known outside of Las Vegas but who quietly used other gangsters to his advantage and built a legal empire worth a fortune?

Pupetta’s skills extended beyond crime and into the realm of the kind of undeserved self-narrative that defines the Mafia in America. The folks in Italy are less amused given how entrenched and pernicious the underworld is in every facet of Italian life. Indeed, the real Mafia is less Shakespeare/Mario Puzo and more Elmore Leonard: capricious, often incompetent, monstrous, and without redemption.

But say what you will about the mob, they do tend to produce real characters such as Pupetta, not to mention a female motorcycle gang of enforcers I’d gladly let protect me.

The Godmother is an original piece of work that takes mob-watchers outside of the usual cliches. It’s often a challenge for American readers to follow a narrative set in a foreign country, but I found myself wanting to hang out with Nadeau’s vicious and deluded sorceresses and listen to them lie to me just a little more about how they’re the victims in all this. Their stories are deeply disturbing, darkly funny in places, and validate the notion that the best thing about the Mafia is its gift for mythmaking. Readers, meet Donna Corleone.

Said Pupetta shortly before her death from natural causes, “Americans haven’t written much about me. They might be interested.”

Eric Dezenhall is the author of 11 books of fiction and nonfiction, including The Devil Himself, about the American Mafia’s secret partnership with the U.S. Navy during World War II.