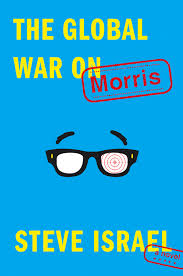 Considering the release in December of the Senate Intelligence Committee’s report on torture, Steve Israel’s first novel, The Global War on Morris, is particularly timely. Israel draws on his 14 years of experience as the Democratic representative of New York’s Third Congressional District and on his personal background to craft what is not a Jason Bourne novel, but rather a satirical approach to some very serious issues of national security embedded in the post-Sept. 11 era.

He touches upon — and satirizes — governmental data collection, politics, and the helplessness of individuals in the face of what appears to be monolithic and unresponsive federal power that purports to safeguard democracy and freedom. The dedication page sets the tone (if not the political bias of the story): “To former vice president Dick Cheney. And to my dad, who didn’t particularly care for him.”

Morris Feldstein and his wife Rona live in Great Neck, Long Island. He is a pharmaceutical salesman who reluctantly holds a minor office at the local synagogue; she is a social worker. He loves watching the Mets and Turner Classic Movies from his RoyaLounger 8000 (Morris’s gravitational pull to the RoyaLounger is mentioned 10 times in the novel); she is interested in social issues, debates, and CNN. They eat take-out every night on a predictable schedule.

In fact, “Morris Feldstein’s entire life was tucked in the safe confines of anonymity. If Morris clung to any philosophy, it was ‘Don’t make waves.’” Rona, by contrast, “had to do those unpleasant things that Morris hated about life; asking strangers for directions, arguing with sales clerks, protesting invasions of foreign countries.”

These prescribed roles propel the book’s trajectory of events, as Feldstein comes to the attention of NICK (“Network Centric Total Information Collection, Integration, Synthesis, Assessment, Dissemination, and Deployment System” — who knew!), a supercomputer authorized by Cheney that is “so secret that even President Bush could not be briefed on it.” With input from an alphabetized soup of federal and local agencies, NICK begins to collect apparently disparate pieces of information about certain individuals. “NICK was aroused. He purred with curiosity.” Indeed, “this Morris Feldstein was beginning to piss NICK off.”

We follow federal and local agents whose ambition and political fervor construct a fragile but inevitable case that Morris is a terrorist. Then, we observe the toxic chemicals of political ambition and power that use terrorist threats to ensure Bush’s re-election.

Israel creates a humorous caricature of Morris as everyman through the reporting of his bland and repetitive daily life, his desire for anonymity, and his commitment to sliding through life without friction. With an amusing rendition of government agencies in alphabetical order as a backdrop, he develops the major actors through his satire.

As the book progresses we, like NICK, monitor Montoyez, an underground figure who counterfeits drugs and who tries to seduce Victoria, a doctor’s receptionist. We witness Morris’ 22-minute affair with Victoria, which kicks off the whole mess. We, too, surveil Rona, who befriends and provides therapy for Hassan, the towel attendant, and his terrorist co-conspirators at the Paradise Hotel (sans the 72 virgins).

The author spares no one in the Bush administration, its policies, the National Security Agency’s data collection efforts, and bureaucratic fragmentation and secrecy. For example, we hear President Bush ask, “Am I supposed to know all this [knowledge of a threat] or is this one of your deniable implausibilities?” In another instance, Cheney asserts, “We should call this the JTFF. Joint Task Force Feldstein.”

Beyond that perspective, Israel has equal if not humorous disdain for bureaucrats in general, the Morrises of the world, and the citizenry’s inability to change things. It is hard to feel anything about the main characters, who are generally caricatures of the inept, the ambitious, and the political.

The Global War on Morris is written in 52 chapters in ever-shifting and sometimes confusing perspectives, including the narrator’s voice, politicians, law enforcement, Morris, Hassan, and Victoria.

While Israel has written an amusing novel, his exaggeration, parody, and clever humor at times become ends in themselves. To be sure, I laughed at some characterization and juxtaposition of events and people. Indeed, NICK, the competing and desperate government agencies, and the terrorist Hassan and his Abu al-Zarqawi Martyrs of Militancy Brigade regularly come across as the Keystone Cops or the Smothers Brothers. Yet despite the profoundly serious events that undergird Israel’s story, he does not fully convince. He has not asked me to take a critical stand.

By the end of Feldstein’s story, I was expecting more judgment, outrage, and call to action through Israel’s satire. Instead, I got his seemingly evenhanded treatment of the villains and victims. He does not make me angry about what happened to Morris and his family, though I do feel affectionate pity. Israel does not call me to be some version of Edward Snowden and to wrestle with the Leviathan. But, you know, perhaps that is his point. Let me think about it while I lie back on my RoyaLounger 8000 and catch the game.

This powerhouse thriller poses complex questions about human nature and the strength of a mother’s will.