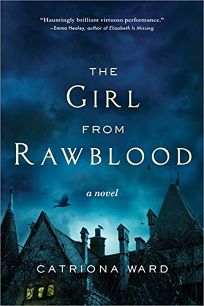 If you’re an adult, it’s likely been a while since you’ve been truly afraid — not anxious or concerned, but knees-knocking, feet-quaking-in-boots afraid. And if you’re an adult who likes a good scare now and again, maybe you miss that feeling. Catriona Ward’s achingly melancholy and frightening debut novel, The Girl from Rawblood, is a beautifully rendered ghost story that will get your heart thumping — a reminder that things that go bump in the night are not always as mundane as a vase knocked over by the cat.

The Villarca family, around which the novel is centered, is doubly cursed. Not only are they doomed to die young and violently, but they bring the same fate to anyone they choose as friends or lovers. Living in Rawblood, their ancestral estate in Devon, England, Iris and her father, Alonso, are the last remaining Villarcas.

Alonso, after having lost more than one companion to the curse (dubbed “her” because the deaths are always preceded by the vision of a woman in white with terrifying eyes), is determined that it shall go no further.

In trying to convince Iris that she must remain alone and unattached her entire life to protect herself as well as others, he describes the specter’s wishes: “It is as if she would have Rawblood and all of us in it suspended forever, unchanging…Sometimes, I have thought, over the years, that we are merely playthings of a kind. But she kills her toys, in the end.”

At first, Iris believes her father is lying to keep her by his side, and she resents him for it. She might feel differently if she learned, as we do, the tragic histories of the many people connected to the Villarcas and the house, interspersed with her own story.

Religious Charles Danforth, Alonso’s friend and former lover, who loses his faith during a visit to Rawblood: “I have seen today…her. I have seen that God is a farce. I have lived my life always half in shadow. And for what? To appease whom?”

His sister, Meg, grows up in an abusive foster family. At first, she is beaten, but as she becomes a young woman, she feels her foster father’s intense gaze: “There is another look that sits deep in his eye these days. I am lately fifteen. Women are punished differently from children.”

Alonso’s mother, Mary Hopewell, and father, Don Villarca, had purchased Rawblood from a neighboring family and sought to make it a beautiful home until their happiness was brought down not only by her, but by a family scandal.

And then there is the unknown soldier, marching unseen through the bracken of the world, hoping only to return home and put an end to unfinished business: “There are miles between me and Rawblood. I am keen to end it. And she goads me on. Bile rises; confusion rises. Keep it simple. Remember what to do.”

The stories of these luckless Rawblood inhabitants and their companions are laid bare in painful and haunting prose, enough to make the reader want to reach through the pages and shake Iris, warn her to obey her father at all costs.

But Iris, like all growing children chafing against their parents, defies Alonso. Contact with the outside world, most notably in the form of one of her family’s grooms, convinces her that she cannot live cloistered forever, and in a hasty — and instantly regretted — moment, she undertakes a reckless and monumental action that ensures she can never return to Rawblood.

“Without doubt, this is my doing,” she reflects in the final moments she spends in the only home she has ever known. “The great, great depths of my stupidity are revealed. My arrant carelessness, my arrogance. I’d thought the rules didn’t apply to me.”

The reader might hope that in putting Rawblood behind her, Iris has a chance at leading a normal life, but when we next encounter her, she has been imprisoned in an insane asylum. Ward tells the tale of Iris’ time there in excruciating detail, each incident of inhumanity feeling like a finger pressed on a day-old bruise.

Iris, still a child with no real experience of everyday life (let alone the fractured regimen of life in a 1915 insane asylum), is now quite willing and able to cut herself off from others, much as her father would have wished.

“Why didn’t I ask more questions?” she silently asks her father after being injected with phenobarbital to force her to sleep. “About yourself. About everything. I suppose I didn’t believe, in those days, that people actually died.”

It would seem inconsistent with the tenor of Ward’s novel to grant Iris a happy ending, and indeed, one cannot call her journey happy. But as her narrative unfolds, it seems possible she might be able to break the Rawblood curse, although at great personal cost.

Will Iris have the strength — and, perhaps more importantly, the courage — to incur that cost? The reader will certainly be kept on her toes until the very last page, desperate to know the answer.