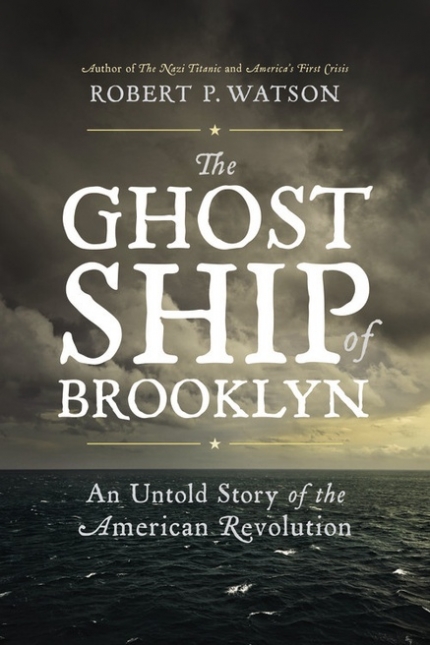 Historian Robert P. Watson has succeeded in shedding a brilliant light on a little-known facet of the American Revolution: the British prison ships of Brooklyn. His narrative focuses on the infamous HMS Jersey, a hulking, dilapidated warship converted into a jail for Americans — and dubbed by those inmates “the Hell Ship” — captured during the War of Independence.

All told, twice as many Americans died aboard prison ships as did on the battlefield. Watson provides a horrifying glimpse into life aboard the Jersey through the accounts of five men whose names you are unlikely to find in any textbook: Christopher Hawkins, Thomas Dring, Thomas Andros, Ebenezer Fox, and Andrew Shelbourne, all of whom survived to tell their tale.

Watson places these men within the context of their times; readers learn that most of them joined the Patriot cause with visions of glory and adventure, only to find their lives upended in a place of filth, starvation, and disease. Many of those held in the prison ships of Brooklyn’s Wallabout Bay were captured at sea, where they served aboard American privateers seeking to wreak havoc on British vessels.

Several of them escaped, only to be lured back into the contest and once more, by odd twists of fate, to be returned to the dank, deplorable conditions they had fled. The treatment of the prisoners, Watson emphasizes, constituted nothing short of a war crime.

The prison ships were under the direction of the Royal Navy. Since much of the war was waged in and around New York City, the British first utilized public buildings there as holding tanks for American prisoners. Due to an eventual lack of space, however, they were forced to begin using old warships moored in a shallow bay on the East River.

Those in charge of minding the inmates were a sadistic lot. Watson writes with great verve as he offers account after harrowing account of prisoners coming to grips with their fate. He uses extensive resources, and the narrative reads like a gothic horror tale:

“The ship was moored like a monstrous, condemned beast by heavy black chains. These old, rusting cables were affixed to the front and back of the ship at midlevel deck, and angled down into the murky water…The old, black hulk looked the part. She could no longer sail. Her rotted hull leaked, causing the prisoners to shiver in wetness during heavy rains, and the ship had to constantly be pumped to prevent her filling with water…prisoners crowded her three main decks as well as the quarterdeck and forecastle…a solitary accommodation ladder on the aft starboard side of the ship provided a way on and off of the floating coffin.”

In spring 1780, when the Jersey was first transformed into a floating jail, 400 prisoners were crowded below her decks; a year later, the ship held 850 men. By the time the war ended in 1783, the disease-ridden vessel housed more than 1,000 souls — most of them delirious and skeletal. At one point, records show, “Fully half, and at times more than half, of the prison ship population of New York was incarcerated on the Jersey.” All told, 11,500 men perished in its hold.

Lest one think this tale is singularly depressing, Watson demonstrates the resilience of those entombed. They try to take care of each other when they can, and in one case, a prisoner who has contracted smallpox uses a pin to open a pustule on his skin to inoculate a 12-year-old cabin boy who fell into British hands. Unfortunately, the child died and, like the other deceased, was dumped into a canvas bag and buried onshore.

Dring, one of Watson’s sources, survived and penned his memoirs years later. Watson writes, “Dring noted of his feeble effort to tell the stories of the ghost ship of Brooklyn, ‘They have not been exaggerated…but not one half of the detail of its horrors has ever been portrayed.’”

Robert Watson has done more than make up for lost time in this empathetic rendering of a mostly forgotten chapter of American history. Anyone interested in this time period will find this book an illuminating and worthwhile read.

James A. Percoco is the Teacher-in-Residence at the Civil War Trust and is author of Summers with Lincoln: Looking for the Man in the Monuments. He is a member of the National Teachers Hall of Fame, Class of 2011.