The Fracking King: A Novel

A boys’ boarding school is a dark place in more ways than one. 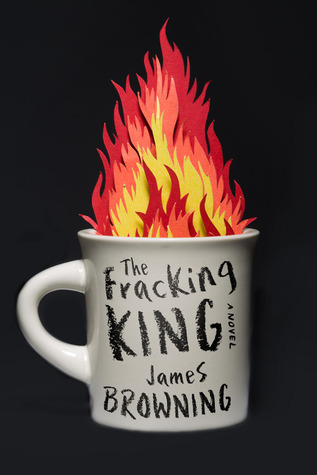 Located in northeastern Pennsylvania, the school, built in the shadow of the Endless Mountains, has recently leased much of its land to Dark Oil & Gas, a nefarious corporation that is conducting hydraulic fracturing (aka “fracking”) close to the school.

Dark also provides scholarships to students, including our narrator, Winston Crwth. “Crwth” is Welsh, Winston explains; “it rhymes with truth.” Heavy-handed? Perhaps. But The Fracking King isn’t particularly concerned with subtlety. At once an environmental polemic and a literary novel, it demonstrates the difficulty of serving two masters at once.

As the story opens, Winston has landed at Hale after unsuccessful stints at two other schools. He finds Hale’s campus “Dickensian,” and wonders at the lack of sunlight and the garish, green-painted grass. As he settles in, he discovers that the radiators in his dormitory never turn off, that there’s one girl at the school (a student he meets refers to her simply as “girl”), and that his roommate is dyslexic, mysterious, and the son of the state’s poet laureate, who teaches at Hale and whose position is, like Winston’s scholarship, funded by Dark.

Winston’s parents are divorced, and he has grown up bouncing between coasts, but his defining characteristic is his obsession with the game of Scrabble. A prodigy, he is so obsessed with the game, he even thinks in Scrabble terms. He’s read the dictionary and memorized much of it. He uses words such as “phtpht” in casual speech, explaining that it, along with “tsktsk,” is one of the two longest words without vowels. He also notes on several occasions that, for Scrabblers, words’ meanings are secondary.

It’s a slightly parallel universe The Fracking King occupies, where Scrabble and wordplay in general loom so large. Almost all the characters play. “Scrab?” they propose, and everyone knows what they mean. So it follows that “girl” (who turns out to be Thomasina, the headmaster’s daughter) is a formidable Scrabbler, on whom Winston quickly develops a crush.

The plot’s main thread involves Winston starting a Scrabble club at Hale and setting his sights on winning the state tournament so he can confront the governor (also a Scrabbler, and also a lackey for Dark) about the dangers of fracking, which he discovers in various episodes over the course of the book.

There’s also a virtual-reality game about boarding school called “Leah”; a nebulous flirtation with Thomasina; Winston’s participation on the crew team; his Scrabble games against a computer named Jane; and his sometimes mystifying relationship with his roommate, Rich.

According to the book’s jacket, James Browning lives in Pennsylvania, works for Common Cause (a government watchdog group), and has written a series of exposés about the political expenditures of the fracking industry. Given this, maybe it shouldn’t be surprising that his political opinions come through so clearly.

It’s immediately evident who’s good and who’s bad — “Dark” vs. “truth” doesn’t leave much to chance — and there are few significant reversals or surprises along the way. There’s not much moral ambiguity, no struggle to decipher the truth. Consequently, the characters can feel thin, often conversing in witty banter that is occasionally funny but rarely illuminates who they are or what they want. Ultimately, both character and plausibility take a back seat to the book’s political cause.

Browning has a keen writer’s eye, offering intriguing details and fine insights, especially in the opening sections; Winston’s discussion of his divorced parents and his introduction to Hale feel genuine and wise. At times, though, the writing seems random or rushed; in several spots, quirky details (like the green-painted grass) are repeated, but presented as new, while other information that feels necessary is left out.

The Fracking King’s jacket describes it as “an environmental novel,” which is apt; its purpose is less to explore a subject, or any particular aspect of human experience, than to report on one — fracking — and then make its case. While this may put off readers whose politics don’t align with those of the author, others may find themselves persuaded — or deeply alarmed — by Browning’s argument.

Over the course of the novel, we witness various ill effects of fracking: flaming tap water, burgeoning skin lesions, scum-filled toxic ponds. These images are, unfortunately, eminently believable and linger long after the book’s somewhat madcap plot has been resolved.

Emily Jeanne Miller lives and writes in Washington, DC. Her first novel, Brand New Human Being, was published by Houghton Mifflin Harcourt in 2012.

The Miniaturist: A Novel

A young bride struggles to make sense of her new life in 17th-century Amsterdam in this evocative, atmospheric tale.