The Flame Bearer: A Novel

In the latest installment of this long-running series, Lord Uhtred marches onward to fulfill his destiny. 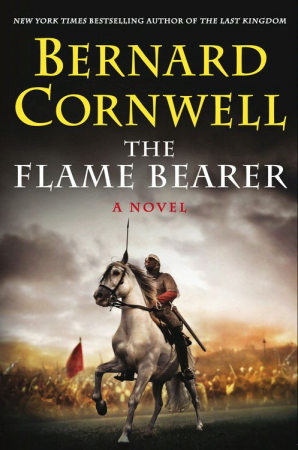 Uhtred of Bebbanburg, the hero of Bernard Cornwell’s 10-volume (and counting) Saxon Chronicles, was 9 years old in A.D. 866 when marauding Danes killed his father and brother and forcefully adopted him.

Uhtred’s father was the lord of Bebbanburg and Uhtred was the heir. However, his uncle usurped the throne in Uhtred’s absence. Across the 10 books, Uhtred never forgets his vow to return to Bebbanburg, regain his rightful throne, and exact revenge upon his uncle. In The Flame Bearer, Uhtred finally attempts to make good on his vow.

Cornwell’s tales are set against the backdrop of the birth of England under Alfred the Great — the King of Wessex, who had the vision of forging all the Saxon kingdoms into a united England, and the king who historians recognize as the first English monarch. As a young man, Uhtred is maneuvered into giving his oath to serve Alfred and later his daughter, Æthelflaed.

Born a Saxon but raised as a Viking, Uhtred has come to despise the Saxons and their religion that reveres “the nailed god.” His favored nickname is Uhtred the priest killer, and in The Flame Bearer, he is given the opportunity to once again assert the veracity of that name. So it is with irony that he spends his life as the Saxon’s leading warrior against the Danes, his adopted people. But oaths are binding and cannot be broken without displeasing the ancient gods that Uhtred serves.

In The Flame Bearer, it is now A.D. 917, and Uhtred is an old man of 60, but still a fierce and fearsome warrior. Alfred is long dead and his son, Edward, now leads the effort to drive the Danes from all the Saxon lands. Edward’s sister, Æthelflaed, rules neighboring Mercia and still counts Uhtred — a former lover — as her protector.

As long as she rules, Uhtred will not raise a hand against the Saxons. The Danes’ English territory has been reduced to only Northumbria. Bebbanburg (modern-day Bamburgh), an impregnable fortress located on the rugged coast of Northumbria, is now ruled by Uhtred’s cousin, his father having died, thus cheating Uhtred of his revenge. It is under siege by invading Scots led by King Constantin with support from Danish fighters.

Meanwhile, the Saxons are threatening to break a fragile truce with Danish Northumbria, which is ruled by King Sigtrygger, Uhtred’s son-in-law. In the opening pages of The Flame Bearer, Uhtred cleverly defuses a plot by Æthelhelm, a wealthy Saxon lord and King Edward’s father-in-law and chief counselor, to provoke war. Instead, Uhtred engineers a one-year extension of the truce. With this respite, Uhtred is free to pursue his dream of retaking Bebbanburg.

By now, Cornwell has settled into a comfortable formula with the Saxon Chronicles. Uhtred is faced with a formidable challenge, he suffers multiple setbacks, but ultimately through guile, courage, and ferocious fighting skills, he triumphs. It is a winning recipe that the reader can’t help but be swept up in.

Cornwell is the author of 55 novels — most of which are historical fiction, including 20 books about Richard Sharpe, soldier extraordinare in Wellington’s army in India and the Peninsular Campaign — and one nonfiction work. He provides his fiction with a sound factual foundation and is especially skilled at describing the warrior mentality. His battle scenes are vivid, thrilling, and, at times, quite gruesome. The Flame Bearer is no exception.

In an historical note at the conclusion of the book, Cornwell writes of the significance of the novel’s title. Ida, an Anglian, invaded Britain in the mid-6th century A.D. and captured the land upon which the fortress of Bebbanburg was eventually built. His enemies called him the Flamebearer. Uhtred hopes to repeat the event. Eventually, the real Uhtred family came to rule the area. In fact, Cornwell claims he is a descendant of that family.

In that same note, Cornwell also explains that unlike earlier entries in the series, The Flame Bearer is not based on the known historical record. There was no Scottish invasion of Northumbria in A.D. 917, nor was there a duplicitous attempt to break the truce between the Saxons and the Danes.

Many of the novel’s characters, including King Edward, his sister, Æthelflaed, and his son Æthelstan, the presumptive heir to the throne, Æthelhelm and his grandson (and King Edward’s second son) Ælfweard, (whom Æthelhelm would like to see king), and King Constantin, are all historical figures, but they performed none of the actions attributed to them in the novel.

In response to readers’ questions on his website, Cornwell has speculated that there will be at least four more entries in the Saxon Chronicles — Uhtred’s story is not yet complete, nor is England united. I suspect, like The Flame Bearer, the next books will be just as exciting and well worth readers’ time.

By Bavo Dhooge, with Josh Pachter

A zombie teams up with a detective to solve gruesome murders.