The Fifth Letter: A Novel 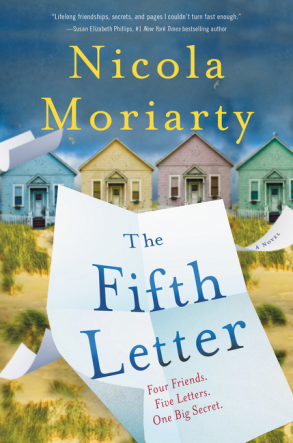 Nicola Moriarty’s latest novel, The Fifth Letter, revolves around four women. Joni, the unspoken leader, brings the girls together in high school after discovering that their last names all begin with the letter “C” and that they’re all Scorpios.

As happens in life, they begin to drift apart over time; four get married and three become mothers. When they meet for their annual get-together, the women reminisce about their adolescence. Less than sober, they decide to write each other anonymous letters containing a deep secret.

One of the friends pens an incendiary note that reveals a troubled, violent mind and a dark obsession with another member of the group. Realizing her mistake, however, the writer burns the letter. By chance — and to her horror — Joni retrieves the original computer file. As the vacation continues and more secrets come to light, tensions grow between the women. Just how much are they hiding from one another?

The premise of this book is fascinating. We all keep secrets, some of them dark, often from those closest to us. It’s a fertile concept, but the book doesn’t manage to capture the inner turmoil of the women’s private lives. And despite being set up as a mystery, the narrative fails to drop clues about whodunit.

The reveal at the end, therefore, is lackluster. In fact, the only real hint given is that Joni is not the writer of the troubling letter since her shock at finding it begins the novel. A few other puzzle pieces are floated, but they appear just before the grand confrontation.

Throughout, the writing doesn’t follow the “show, don’t tell” rule, either. Starting with the four characters, the story constantly — and repetitively — explains itself (e.g., Deb breaks the rules; Trina is strong; Eden is a good girl; and Joni is the organized one). These women rarely, if ever, act or speak in a way that makes their personalities stand out. Hence, they become interchangeable.

When the writer of the mysterious fifth letter is ultimately named, readers may close the book feeling unstirred, because, like the characters, the plot seems contrived. Perhaps the worst instance of this is when we discover the reason for the hatred behind the letter; the event that led to it seems to have been pulled out of thin air.

The story gains momentum in the last 50 pages. Not only do the characters grow more three-dimensional, but other plot points become engaging. Unfortunately, it’s too little too late. While the premise of The Fifth Letter is intriguing, the author doesn’t maintain that intrigue. Perhaps if she’d started on page 220, where she really begins to hit her stride, the novel would have been something amazing.

Fatima Azam is working on her Ph.D. in comparative literature at the University of Maryland while also teaching English writing and literature. She resides in Maryland and is writing her fifth novel. She loves words almost as much as chocolate pastries.

The Oxford Inheritance: A Novel

By Ann A. McDonald

An unusual mixed-genre tale of self-discovery and family secrets