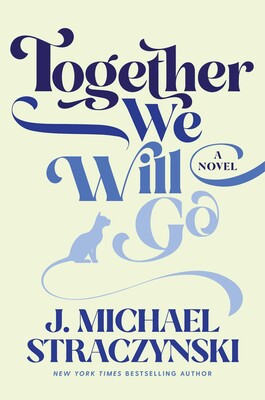 Some people would rather be dead than take a bus across the United States. The 12 main characters in Together We Will Go don’t need to choose. They’ve all agreed that the last stop should be the Pacific Ocean, accessed by driving the bus off a cliff.

Each traveler has his, her, or their own reasons for having the blues. One literally is blue due to a rare heart condition. Others are weary of battling persistent emotional or physical pain with causes ranging from gender confusion to racism to guilt for getting away with a heinous crime. The book’s cover art hints at perhaps the most touching character — Zeke, an addict who sneaks his dying cat, Soldier, aboard with him. Zeke’s belated explanation for wanting to die will cause the coldest of hearts to melt.

All are sensitively portrayed, and their stories are reminders that, to some, suicide can seem to be the only logical or sensible end.

The group (mostly Millennials) is brought together by a frustrated and failed writer named Mark, whose own excuse is that “the only good writer is a dead writer.” His plan is to have each passenger contribute to a trip diary that will bring him posthumous publishing success. Early on, you might think you already know the ending — if everything goes as planned.

Author J. Michael Straczynski is a successful and experienced graphic novelist and TV/movie screenwriter whose credits range from several years of The Amazing Spider Man comics to the film “Changeling” (2008). His Hollywood skills help smooth the multiple-points-of-view approach in this narrative, in which any page might include dialogue between two characters, an audio-diary transcription from another, and a text-message thread from still another. (Text threads appear as they would on a phone — in small print — and can be a bit of a nuisance to read.)

It’s easy to imagine that Straczynski may have been inspired by Tom Wolfe’s classic nonfiction work, The Electric Kool-Aid Acid Test. That book followed the adventures of a group of hippies (Ken Kesey and the Merry Pranksters) riding eastward from the Bay Area to the 1964 New York World’s Fair aboard a ramshackle old school bus named Further.

Together We Will Go begins in Miami and meanders westward on a bus with no name, stopping along the way to pick up participants who’ve responded to this ad that failed-writer Mark placed online:

“If you can’t carry this weight anymore…if you want it to stop, REALLY stop…then you’ll understand what this ad is about. I’m not here to talk you out of anything. That’s BS and we both know it. So let’s do this right. One big party, one last drive, flat-out, right to the edge and no coming back. Looking for 10-12 people who GET what this ad means and can commit to seeing it through. If that’s you, responded with a text number. Burner preferred. Don’t want or need to know details. Will get back to you ASAP with a pickup address.”

Despite their common goal, those who pass Mark’s attempts to screen out what he calls “death tourists” can and do get on each other’s nerves, and the short fuse they’re all on amplifies the conflicts. Mark himself eventually becomes a target when participants resentfully realize, “We’re just material.”

Yet they bond, in part through spontaneous off-bus experiences — fulfilling one woman’s bucket-list wish to visit a strip club, stopping to smell the roses at a botanical garden, and happily trashing a condemned shopping mall. Holiday decorations are still in place at the latter, and there’s even a hint of Cinnabon in the air thanks to one spirited participant using a baseball bat to turn abandoned boxes of sugar and spices into aromatic clouds.

They’re all keenly aware of taking “last looks” at things and at themselves. Conversations about God and the meaning of life and the best toppings for pizza even foster a few romantic pairings seen as final flings. Some participants reach out to friends and relatives they’ve left behind, with varying results.

(Considering the book’s theme, it’s disappointing that little attention is paid to how suicide affects others. The author does, however, include an important note at the end of the book and provides the number for the National Suicide Prevention Lifeline.)

Things go awry a few hours west of Omaha, when a heartbreaking development leads one participant to check out early and the others to respectfully help him honor his wishes. But Nebraska isn’t among the states where assisted suicide is legal, so before long, they’re recalculating how to reach their final destination without being caught first by police.

Is there a happy ending here? Readers may need to think twice about how to define “happy.” Nevertheless, 11 U.S. states now allow physician-assisted suicide, reflecting increasing acceptance of the right to die on one’s own terms.

Randy Cepuch is a book selector and reviewer for the Independent. He does not share Mark’s view of what it takes to be a good writer.